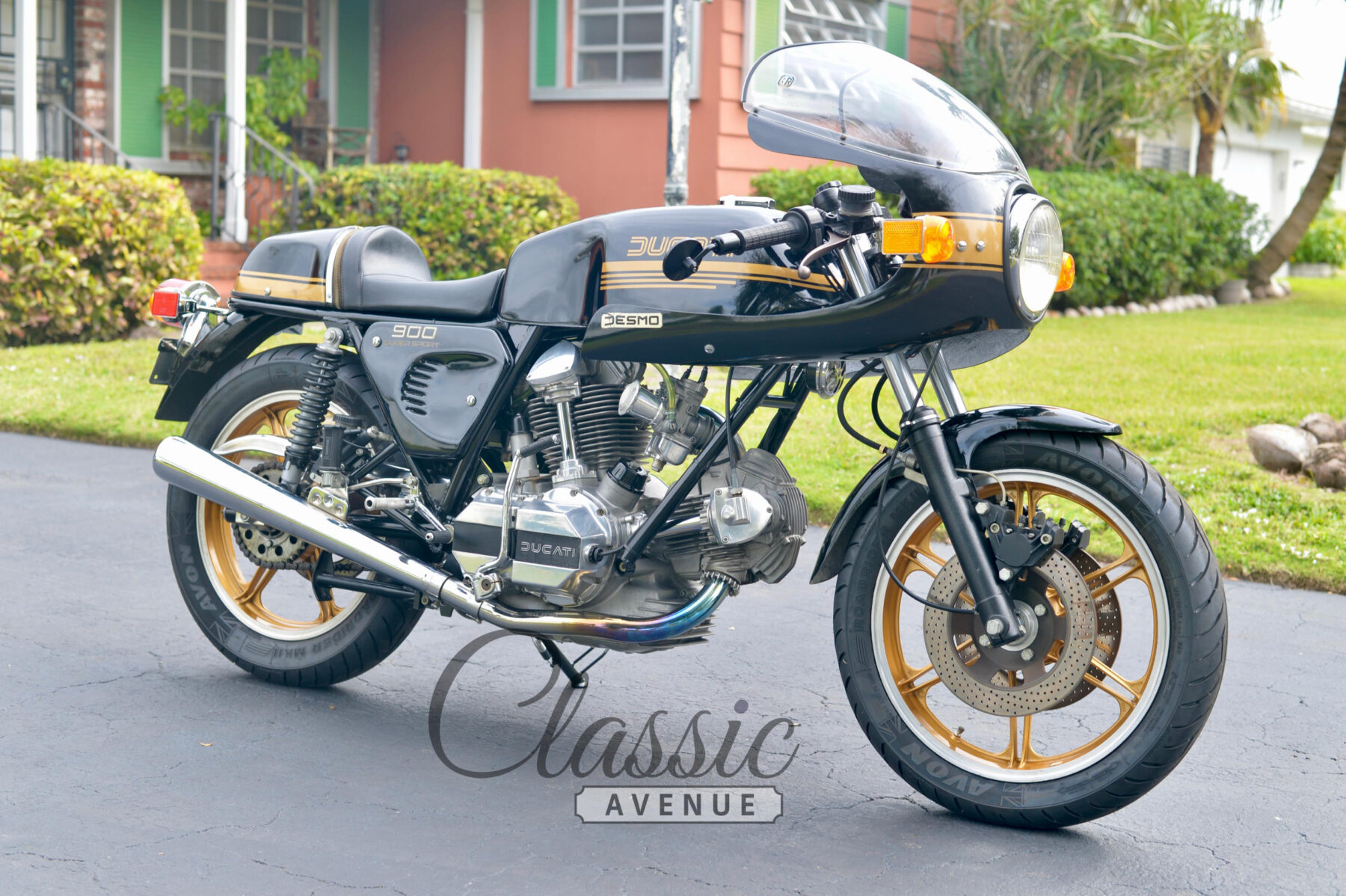 A development from the 750SS, which put Ducati on the map with a monumental Daytona win in the hands of Paul Smart, the 2nd generation V-twin engine, the 864c ‘square case,’ debuted in the 860 GT of 1974. The following year was back in more familiar surroundings, a bike that shadowed the 750SS. UK’s Bike magazine declared “while other flash Italian bikes are basically roadsters dressed up and pretending to be racers, this is the real thing,”

For the 1979 model, black with gold trim livery was on offer with striking cast wheels finished in gold, as seen here. The engine benefited from upgrades, including a beefed-up bottom end, improved alternator and Bosch ignition.

Cycle World columnist Peter Egan has owned several 900 Super Sports, written about them often and considers the 1980 iteration among his all-time favorite motorcycles. “At the time I bought my first 900SS back in 1980, it was the nicest sportbike I’d ever ridden,” he said. “Brakes, handling, torque and speed were all marvelous, and that wonderful V-twin sound…”

The 1980 Ducati 900SS on offer here is something of a unicorn. Only 3-owners have enjoyed this fabulous Taglioni-designed machine and have covered only 3,000 miles in its 42-year history.

Notes from the 2nd owner tell us that he purchased the bike from the original owner, a Californian, who received enough speeding tickets to lose his license having covered only 2,859 miles. After some negotiation with his wife, he wheeled it into his living room where it sat for the next 35 years. Upon his passing, his widow sold the bike to a local dealer, where it sat for a further two years. He reported that the bike was absolutely original down to the tires and the air in them! The original airboxes had been removed to aid intake through velocity stacks but accompanied the sale of the bike.

The motorcycle then passed on to the third and current owner, a mature collector in Florida. Upon purchase, he had it thoroughly inspected and sympathetically returned to riding condition by local expert mechanic, friend, and renowned former racer, John Long. The bike was re-commissioned for safe riding with new tires (the original Pirelli Phantoms, date-coded 1979, accompany the sale), battery and an oil and filter change. Everything else was checked and adjusted accordingly.

The bike retains the factory Ballanti-Roberto screen with original decal and uber rare black rubber trim with chrome stripe intact and in fine shape. The factory Marzocchi shocks still in place and stopping power comes from original Brembo ‘shaved’ F08 calipers. Verlicchi dual throttle cables are intact, as is ND switch gear and CEV engine stop switch, installed at the factory on the left clip-on so they are upside down. The owner installed an aftermarket sidestand for ease-of-use.

The bike sports original paint throughout, not in perfect condition, but with the lovely patina of a well-stored, low mileage 40-year-old machine. It is exercised every few weeks or so, to keep everything moving and was recently awarded a trophy at the Dania Beach Motorcycle Show of late January ’22. Bit of a ‘ringer’ really for such an original, exotic machine. Noticed by the submissions committee, the bike’s next stop is the Boca Raton Concours.

Having covered only 200 miles since purchase a few years ago, the bike is now available to a new custodian. Showing a genuine 3,025 miles, this barn (living room) find is a true rarity in unrestored and unmolested condition.

The motorcycle is accompanied by original airboxes, tires and a clean, clear title. A trophy at The Quail Motorcycle Gathering, anyone??

Note: after an exercise ride this weekend (February 27th, ’22), the bike now has a few more miles: