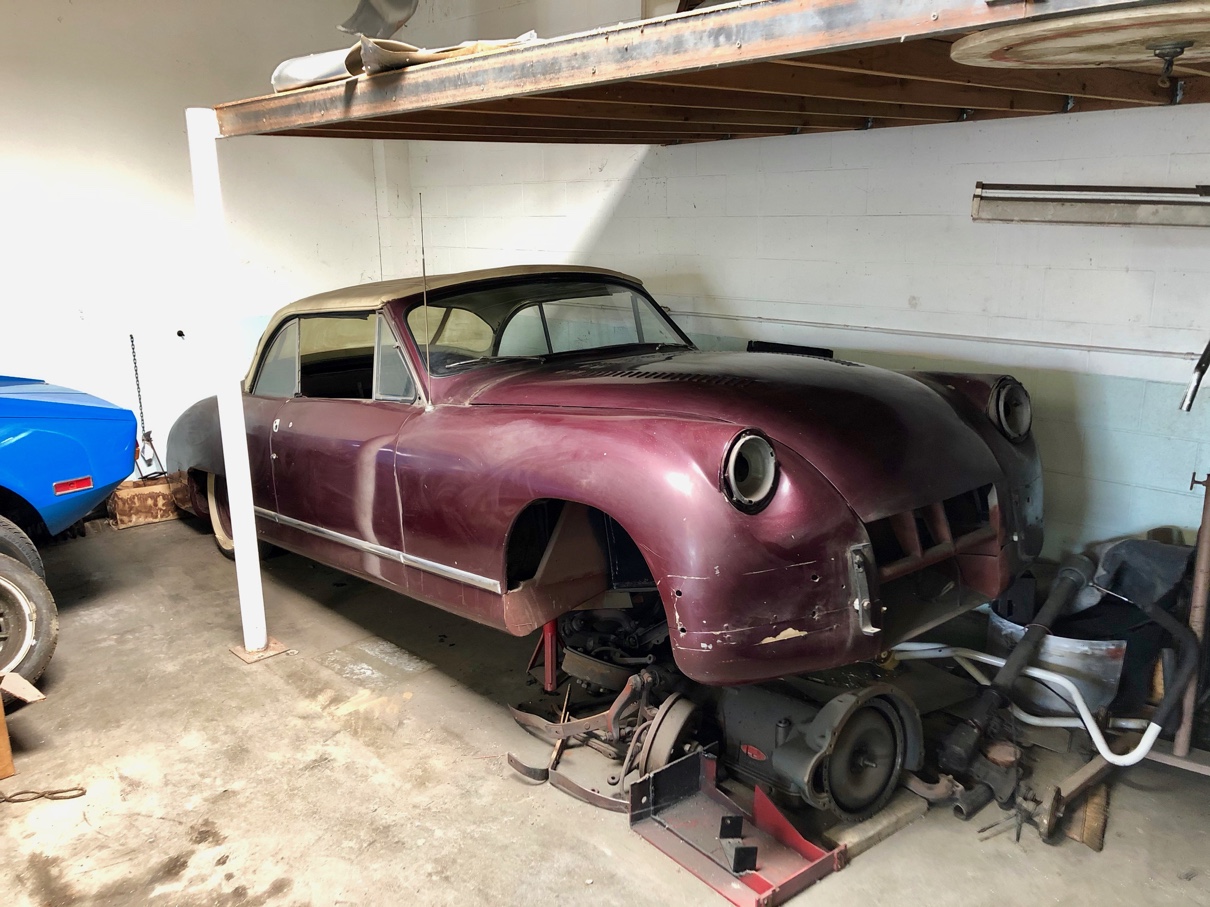 The auto industry has an unparalleled knack of producing colorful and quirky characters, but few are as colorful as Earl “Mad Man” Muntz, as interesting a character as the car he produced. Designed by Sam Hanks and Frank Kurtis of the Kurtis sportscar firm, the 2-door convertible was introduced in 1949 as, arguably, the first “personal luxury car” of the post-war era.

Powered by either a Cadillac or Lincoln V8, both with 160bhp, propelling the car to 60mph in under 8 secords and on to 130mph+, the highly appointed and streamlined Jet was produced initially in Glendale, California, then Evanston, Illinois and Chicago to cut transportation costs of raw materials. Standard features included safety innovations of the day, such as a padded dashboard and seatbelts, though they were connected to the seat rails, so more just for show. Sales faltered. A convertible Cadillac was $4,000, but with such high specification and build quality, it is of no surprise that the $5,500 car cost over $6,500 to produce, and with only 198 built, the production line ground to a halt in 1954.

Madman Muntz was born in 1914 in Elgin, Illinois, and after dropping out of high school, made a name for himself in the sale of television sets and other electronics, and the inevitable used car lot. From there, he found further success in Kaiser-Frazer dealerships in Los Angeles and New York, selling 1/7th of the manufacturers total production in 1947. An advertising campaign created by Mike Shore introduced Earl “Mad Man” Muntz, dressed up like Napoleon and shouting “I want to give them away, but Mrs. Muntz won’t let me … She’s CRAAAZY! … I buy ’em retail, sell ’em wholesale – It’s more fun that way.” It has been written that he made and lost multiple fortunes through his life and was married seven times! Who has the time???

Muntz purchased the rights to the Kurtis sportscar with parts and tooling for $200,000, renaming it the Muntz Road Jet. The new Jet certainly had a passing resemblance to the Kurtis predecessor, though on a grander scale. And often a far more flamboyant one, with color options including Boy Blue and Elephant Pink. In April 1951, Norman Nicholson described the Jet as having “the appearance of a streamlined, scaled-down limousine”. The first cars were constructed with Cadillac power and aluminium body, while the later Illinois cars had Lincoln at the heart and a steel body. They shifted gears courtesy of GM’s Hydramatic, or with a Borg-Warner 3-speed as an option. The car sported independent front suspension with A-arms and coil springs and a live rear axle with leaf springs. Power steering, four-wheel hydraulic brakes, dual exhausts and coil ignition were standard features. With a wheelbase of 113 inches, there was ample room for a rear seat.

Luxury appointments included an all-leather “tuck-and-roll” interior, racing-style Stewart-Warner gauges, a center console complete with Muntz radio, and a very civilized liquor cabinet hidden in the rear seat armrest was an option. The specification drew the attention of the Hollywood set and the list of original owners included Clara Bow, Grace Kelly, Mickey Rooney, Icecapades star, Alfred Trenkler, and movie cowboy, Lash Larue. But a loss of $400,000 brought production to a halt and the last car rolled off the line in 1954.

The Jet on offer here is one of the last Group III cars built, uniquely on a 120” wheelbase chassis with a one-piece windshield. In maroon iin color with matching maroon pleated interior and ivory top, the car is nicely appointed with air conditioning, electric windows and continental kit.

Originally driven by Earl Muntz himself, who recalled using this Jet as his personal car during the final months of the company in 1954. He sold the car to the Fergus Ford Dealership in Chicago, supposedly at a discount. The first registered owner was Hal White, of Montague, Michigan, who purchased the car around 1956. Mr. White owned the car for a couple of years before moving it on to Alan Payne of Bushnell, Illinois, who enjoyed the car until 1974, when it was purchased by R.L. Culbertson of Temple City, California. After a brief four-year ownership, the car moved on to a Mr. Richard Skaff of Harbor City, California. Mr. Skaff owned the car until 1985, when it was sold to our vendor, a Southern California enthusiast with a small car collection. An avid hotrodder and tinkerer, professional engineer, Larry Lary, ran numerous machine and engineering shops in the Los Angeles area, specializing in precision engineering for the aeronautical and astronautical industry. Parts he made still orbit the planet! Soon after purchase, Larry was able to contact Earl Muntz, through his children, honored guests at the Tehachapi “Muntz Mania” gathering, and original ownership was confirmed. Muntz told him that the car was originally gold with a white top, changed to the burgundy you see today to better match the interior. The car was partially dismantled to embark on a complete nut and bolt restoration, but unfortunately, he passed away before refinish work could be started. The car is titled with Chassis number 54M541, which can be found on the chassis rail and inner fender. The original engine is also stamped with the matching number (see photograph).

Offered as a restoration project, mostly complete, the original Lincoln engine and Hydramatic transmission are out of the car, and undoubtedly in need of rebuilding. Front suspension is out of the car, as is the interior, with all original panels and seats present. We accumulated as much of the car as we could find for photography. The car appears to be rust-free and a good candidate for restoration. The car is accompanied by extensive owners club paperwork and documentation, period photos and event and marque paraphernalia.

Made in such limited numbers, the opportunity to even have a chance to buy a Muntz Jet does not come along very often. Here is a unique specification car with perfect provenance, ready to make in to the exact car you desire.

Please contact info@ClassicAvenue.com or on (424) 265.0645 for further information and pricing.