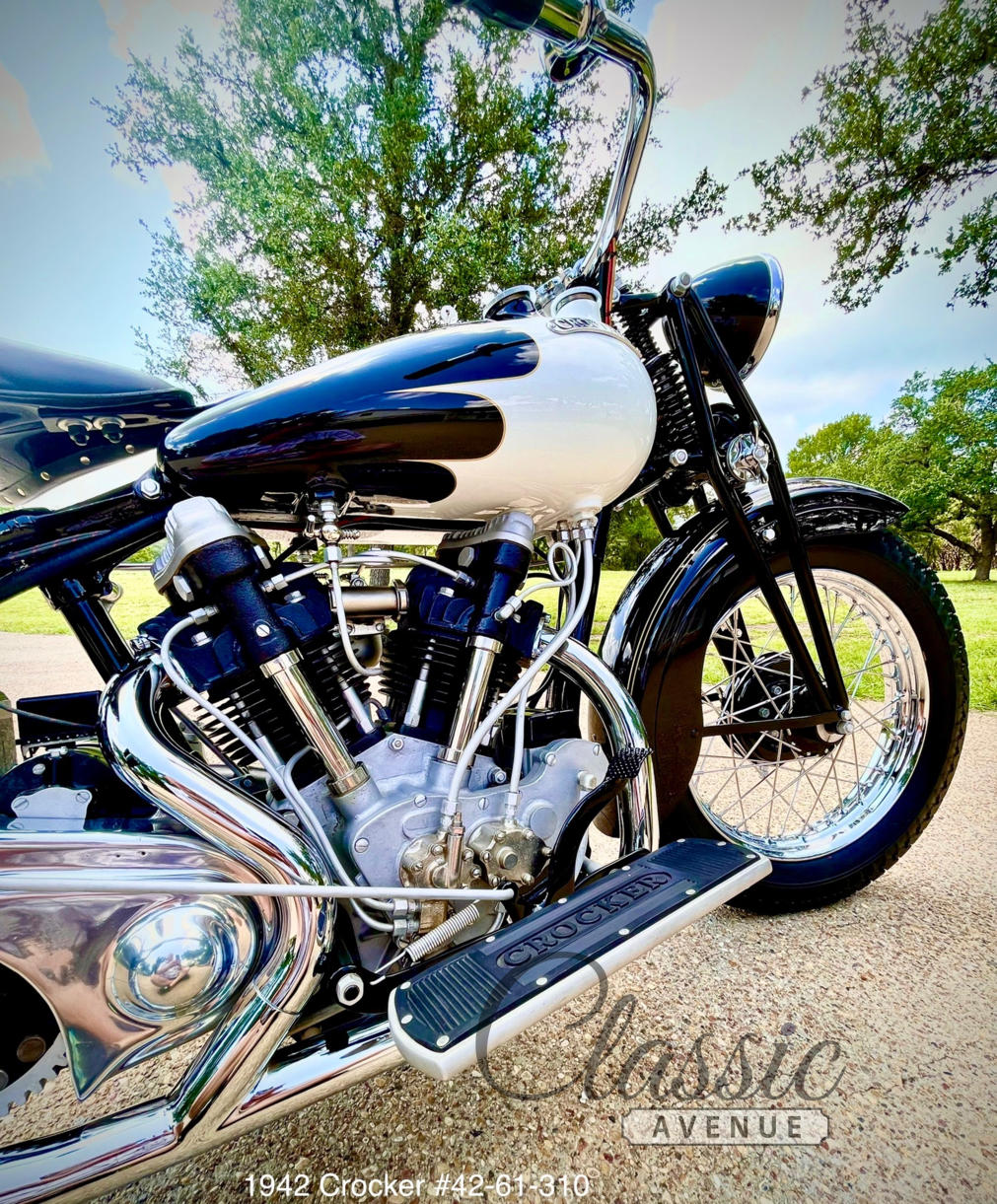 Commonly deemed to be the Holy Grail of American motorcycling, only about 60 Crocker twins for street use were ever produced in the Los Angeles shop 70-odd years ago. Al Crocker started out successfully racing a Thor in enduro events from 1907-1909, forging a friendship with Oscar Hedstrom and Charles Hendee, makers of Indian Motorcycles, before opening Denver’s Indian dealership in 1919. From Colorado, he moved to Kansas City’s dealership before a final move to Los Angeles in 1928 to represent the brand with the Freed Indian dealership at the legendary 1346 Venice Blvd. address. By 1931, Al had started in to manufacturing, first on a speedway frame with Indian’s 45ci Scout power and then by 1933 a 500cc single with overhead valve at the heart.

Having built 40 or so speedway singles, Crocker moved onto motorcycle manufacture for the road, building class-winning, beautiful machines. In keeping with American tradition, the new model had to be a v-twin, a 45-degree unit displacing 61ci (1,000cc), the first with overhead valves, was introduced to the motorcycling public in 1936. Initially built with exposed valves inclined at 90 degrees in a hemispherical combustion chamber, after only 17 units were completed, Crocker opted for the simpler enclosed parallel valves from then on. Other advanced features of the Crocker included a cast-aluminium gas tank and constant-mesh transmission. Faced with competition from Harley-Davidson’s newly introduced overhead-valve Knucklehead, Crocker responded with ever-larger engines, the thick cylinders allowing over-boring, and engines were built up to 72ci (1,180cc) and beyond.

Each Crocker is unique, as Al built almost everything in house to a customer’s specification, including carburetors, with only items such as magnetos, spark plugs, wheel rims, tires and other accessories being bought in, but competing with Harley-Davidson and Indian led to crippling losses on each of the 60 or so machines built and with Wartime supply chain issues, the closure of motorcycle production by 1941.

The 1942 Crocker #310 offered is a rather special example of the Crocker brand. As the last one to leave the Los Angeles shop, this fully documented California-native machine was owned previously by Ernie Skelton and then Gordie Clark for every 40 years, before being acquired by our vendor, who then employed famed and multiple award-winning restorer and marque expert, Steve Huntzinger for a ground-up restoration. His starting point was a complete bike, which he carefully dismantled and refurbished and restored to the very highest concours-winning standards with an 80ci engine capacity. The handgrips and rubber footboards are the last new-old-stock available anywhere, liberated from the original Crocker factory. Even the tires are brand-new-old-stock 1942 Firestones. The cantilevered seat bracket is one of only six utilized on the Crocker. The only non-factory parts used in restoration are 4 head bolts that had to be machined from scratch and of course such items as speedometer cable and front brake cable.

Scrutinized by concours judges and Crocker experts alike, “310” is fully documented in the Crocker registry as the last built before Al had to close the doors. A well-known machine prior to restoration, this just about perfect American icon has covered a mere 14.9 miles since restoration, and considering recent sales results for the marque, represents a perfect opportunity to acquire a show-winning, rare and supremely desirable motorcycle.