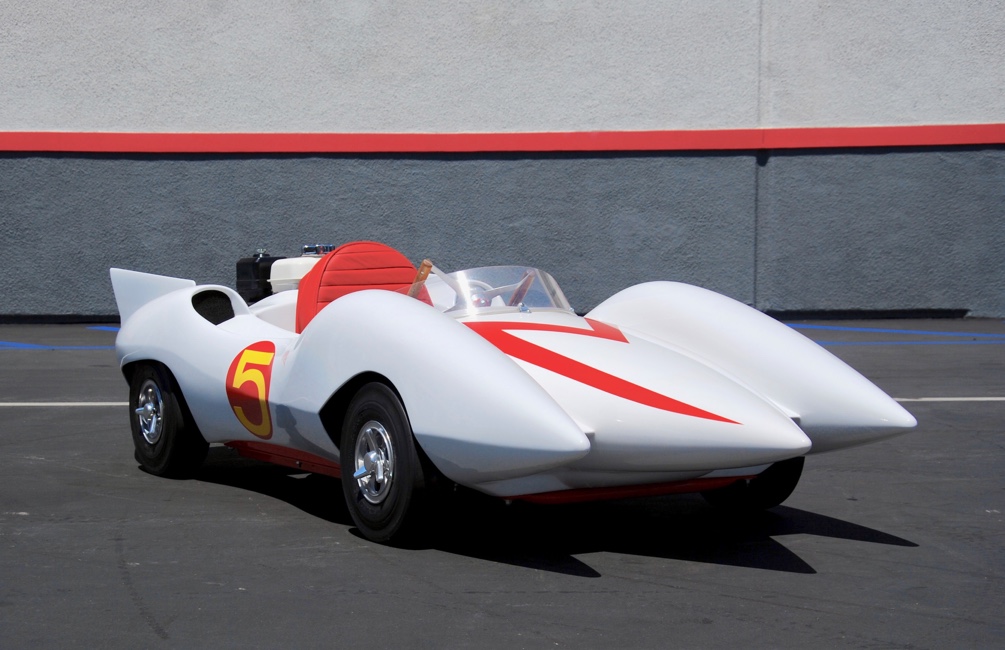 Any budding car nut around in 1967 was undoubtedly glued to Saturday morning’s cartoons, riveted to a Japanese animé series of a futuristic racer, fighting the powers of evil, and he went by the name, Speed Racer. 52 episodes were originally aired in 1967 – 1968 originally in print in Shueisha’s 1966 Sh?nen Book.

Probably more readily recognizable than the star of the show is his car, the Mach 5. A sleek, original designed car, capable of speeds on the straight and sliding through corners that can only be understood from the blurring backgrounds. The car was designed, built, and created by “Pops Racer” (Daisuke Mifune), Speed Racer’s father. It features a set of special devices which Speed Racer uses throughout the series. In the original 1967 series, the Mach Five is a white racing car with an “M” written on its hood (which does not stand for “Mach 5”, but instead stands for “Mifune”, both Go’s last name, and the name of his father’s motor company).

Its name probably derives from the fact that speeds faster than the flash in the 60’s Mach 5 are known as hypersonic. However, the Mach Five cannot reach Mach speeds. The name is also a pun in two languages: the word for “five” in Japanese is “go”. However, the “go” used for the car’s name is a suffix attached to the names of ships, etc. Thus, the car is known in the Japanese version as simply the “Mach”.

With 5,000 bhp on tap, the car was steeped in features and accessories, including auto jacks, special tires for any kind of terrain, cutter blades at the front to clear a path through fallen trees on the race circuit, a deflector canopy that is water, bullet and crash-proof, visual aids, underwater capabilities in “frogger” mode, a homing robot, or drone in modern vernacular, all operated from buttons on the steering wheel, lettered A to G. It even had a trunk, which seemed to be used primarily for hiding other characters.

The Mach 5 on offer here, is a little shy of the features, accessories, weapons and horsepower of the original. It is also a shade smaller.  Designed and built by Gregg Kishline of Kenosha, Wisconsin, several years ago, in excellent scale, specifically for a younger, diminutive racecar driver. Ideal for the 6 to12 year old budding racer, the car is powered by a gas engine mounted on a go-kart-type chassis, shrouded in Mach 5 fiberglass bodywork.

Performance should be impressive for the lightweight but goes completely untested. A gift for the vendor’s son, proved to be more garage art, and the engine has never been run, the tank never had gas, and so, as such, is offered in brand new condition. It comes complete with a Speed Racer helmet.