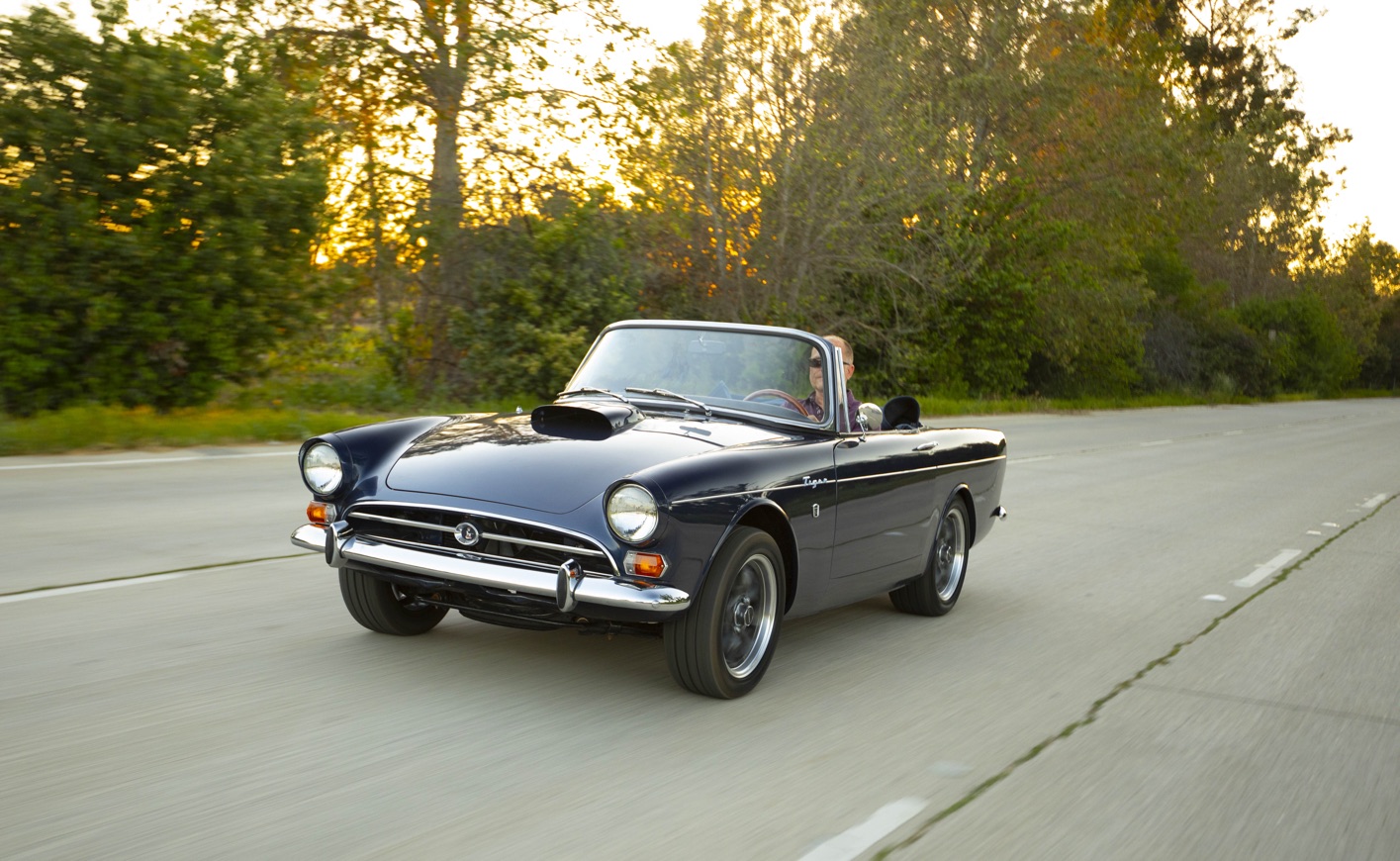 1966 Sunbeam Tiger Mk IA. The Tiger’s genesis began back in 1962 when Jack Brabham, suggested a V8-powered Alpine to Rootes’ competition manager Norman Garrad, who in turn mentioned it to his US West Coast Sales Manager and son, Ian. The logical choice for such a project was chicken farmer come Le Mans winner, Carroll Shelby, father of the AC Cobra. A second prototype, built by former Shelby race engineer, Ken Miles, was completed first at his Cahuenga Blvd, Hollywood workshop. “Ken and I took it for a test drive”, recounts Ian Garrad in a 1980 interview. “I must admit to furtively looking for a change of underwear when we hit the fast lane, but within five minutes I knew we had a winner.”

By 1963, Lord Rootes had learned of Shelby’s “white car” – as the first development vehicle became known – and it was soon repatriated to Coventry for appraisal. It was deemed to be precisely what was needed for the all-important US market. The new model, baptized “Tiger” in homage to Sunbeam’s eponymous pre-war record-breaker, was launched at the New York Auto Show in April 1964. Powered by Ford’s 260ci V8, it weighed only 200 pounds more than the Alpine donor, but with 164bhp, it offered twice the power and thrice the torque. Assembly was undertaken by Jensen, where part-finished bodyshells were “carefully altered” to accept the larger powerplant.

The Mark I Tiger morphed into the Mark IA, based on the Mark V Alpine body, until 1967, when the last of the model in Mark II, 289ci-powered guise left the line. Successful on the track, rallies and in the showroom, the Ford-powered model project suffered cancellation under new Chrysler ownership.

The 1966 Mark IA on offer here is a very late production car, certified by the Tiger Association. It was delivered new to Covina, California resident, Sherwin D. Hoyt. Mr. Hoyt then sold YDR568 in the summer of 1970 to the Robinsons. Walter and Alice Robinson, who lived in West Covina, Los Angeles and enjoyed the car, sparingly, for the next decade, until it was put into storage in 1980, concluded from accompanying registration and transfer documents (pictured). There the car sat, until liberation from its “barn” hibernation in the summer of 2012 by our vendor. Re-commissioned, serviced and tuned, the car ran fairly well, all things considered, but was in tatty condition with shredded soft top and interior. Devoid of any rust whatsoever, it was a prime candidate for restoration. The car was duly dismantled, and the body taken to concours award winner Conley Restorations for a full makeover. The body was dipped and taken to bare metal and fitted to a rotisserie for a restoration as comprehensive below the car as it was above. Doors, hood and trunklid were installed with expert precision of panel fit and equal gaps to the laser-straight body.  The expertly applied paint finish in metallic blue is exquisite with fantastic depth of shine and luster. All brightwork was refurbished and re-chromed to a very high standard and the car rides on brand new Panasport rims with graphite grey painted centers.

The interior has been refinished in quality leather to the original seats, door panels and dash cover, a lush tan to the seats and doors, a matching blue to the paint for the dash. The carpet also matches the exterior in color as well as quality, along with the cloth soft top. The dash panel was remade by a Rolls-Royce specialist in the finest Walnut and a Nardi wood-rimmed steering wheel completes the interior package.

Mechanically, the car enjoyed a full nut and bolt restoration by local shop, Gran Turismo of Los Angeles. The Ford V8 engine was health-checked and refinished and installed in the car. A recent compression check results were 6 cylinders at 150, 2 at 155. The original, refurbished 4-speed top-loader gearbox and new clutch were fitted. The rear-end was rebuilt to complete the restored powertrain. All ancillaries were rebuilt, restored or replaced and a brand new Holley 4-barrel carb sits atop. Brakes and steering were overhauled and all suspension parts, with innumerable other parts were powder-coated at local experts, Safeway. A new wiring harness was installed. Gauges were rebuilt and restored, and all ancillary systems work as they should.

The result: the 1966 Sunbeam Tiger Mk IA drives as well as the looks would imply. Taut and responsive, the car has great power with smooth delivery. It starts easily, idles well and does not overheat. Clutch action is also smooth. Brakes work very well, and the steering feels tight, while the suspension gives plenty of “feel” with good handling manners. And it sounds fantastic.

This was a multi-year restoration and a labor of love for the vendor. Always an admirer of Shelby, Ken Miles and the Cobra story, the Tiger was more to the budget. But the very persona restoration, as most do, got out of hand in both time and finances, thereby offering an opportunity to acquire this superb example of the Anglo-American icon.