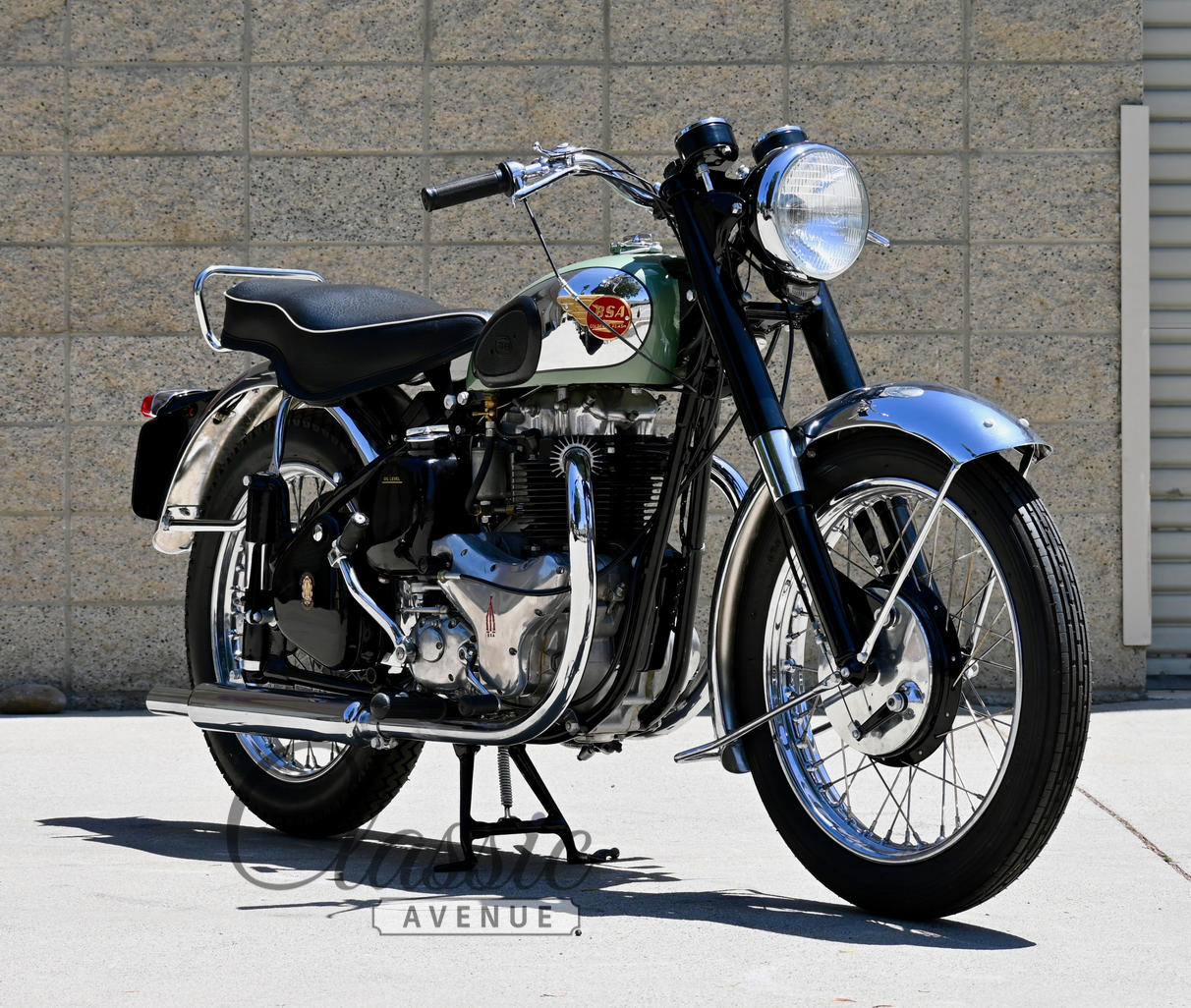 Triumph had rocked the BSA boat of motorcycle manufacture with the introduction of the 650cc Thunderbird in the early ‘50s. The largest manufacturer of motorcycles in the world had to retaliate. They had the A7, a 500cc parallel twin, but needed a 650 to stay in the running. Bert Hopwood, designer of Triumph’s Speed Twin, having been enticed away to Norton for but a year and the design of their Dominator engine, was persuaded to join BSA in 1948 and set the task of creating a competitive 650 twin.

Essentially a redesign of the A7, increased to 650cc, the Hopwood-designed A10 Golden Flash was launched in 1949. It had a 70mm bore and 84mm stroke, a revised alloy rocker box and cast-iron cylinder head, plus an integral manifold for the single Amal Carburetor. A single camshaft behind the cylinders operated the valves via pushrods passing through a tunnel in the cast iron block. A magneto was located behind the cylinders, driven by a train of gears, to provide ignition. A dynamo was positioned in front of the cylinders, driven by a chain. Lubrication was dry sump with oil being distributed by a mechanical pump located inside the timing cover. The crankshaft was a bolt-up 360-degree item (both pistons went up and down at the same time). Main bearings were roller drive-side and a white metal plain bush on the timing side. The conrods were of the split type with shell type big ends.

A semi-unit gearbox, bolted to the rear of the engine cases, meant the duplex primary chain was adjustable via a slipper tensioner within the primary chain case. The A10 was so closely based on the A7 that it used many of its well-proven components, and this large carry-over of parts from the A7 promised greater reliability, with minimal risk of new technical problems.

After a market research tour to America in 1951, Hopwood realized the need for a more powerful variant for the all-important American market. Although a swinging arm frame and alloy head for the BSA A10 were in the planning stages they were some way off.

The BSA Competition Department had experience tuning the existing models. They had tuned versions of the 500cc A7 for the Daytona 200 and other races. Works rider Fred Rist had an A10 desert racer capable of 140 mph, and Gene Thiessen set an AMA class ‘B’ record at the Bonneville salt flats of 151 mph in October 1951. Hopwood decided to make a faster model by bolting on performance parts to the existing A10.

Engine modifications included a 357 race camshaft and an Amal TT carburetor. Power output was 40 bhp (30 kW) and a triplex primary chain was installed. The large 10TT9 racing carburetor required the seat post of the frame to be bent backward with a “kink” to allow for clearance. The frame also had lugs welded on for rearset footrests. A 2.5-gallon Gold Star style tank and chrome mudguards and stays were fitted.

The first Super Flash was shipped to America in February 1953 and American Motorcycling magazine awarded it ‘Motor of the Month’. The bike was in US showrooms in April that year at a price of $975.

The final plunger Super Flash shipped in November 1953. Production of a swing arm Super Flash started late in 1953 with only 19 units shipping between December 1953 and March 1954 before BSA revised their 650cc product line and introduced the A10 Road Rocket which started shipping at the end of April 1954. In total there were 577 plunger Super Flashes produced.

The 1953 BSA 650cc Super Flash Rare Serial no. 1 on offer here is a very special machine. Already rare, as one of only 577 built, the bike was the very first off the production line. Discovered in northern California in 1986 as a basket-case, the matching-numbers machine was subject to a ground-up restoration in 2014 under the supervision of its expert owner, a collector of exceptional vintage European motorcycles. The history file was researched to find the motorcycle was the very first quoted in the factory records, dispatched to West Coast BSA Distributor Hap Alzina on March 2nd, 1953, and specifications in the records afforded a correct and original restoration. The original bike was a very complete example, including hard to find parts. Restoration highlights:

The BSA Owners Club provided a Dating Certificate with copy of factory record dating page, included in the sale along with a BSA Gold Star Owners Club Engine Test sheet (copy of original).

Rarer than the famed Rocket Gold Star, the 1953 BSA 650cc Super Flash Rare Serial no. 1 is rated 5-Stars for ownership according to the Roy Bacon BSA book and a certain investment grade classic. Super Flash ownership is certainly a very exclusive club.