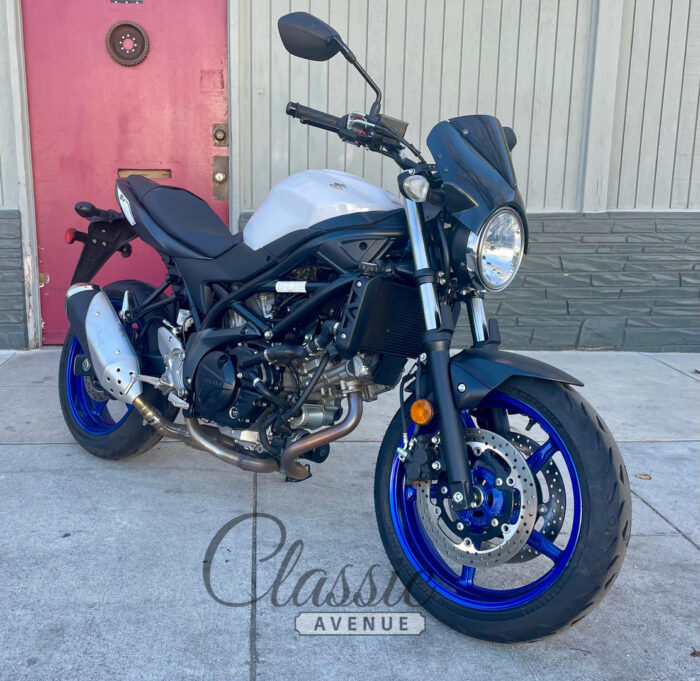 Ever since Suzuki punched out the engine displacement of the Japanese domestic market SV400 to create the SV650 in 1999, the model has remained a best seller for the manufacturer from day one. The company didn’t tamper much with the SV in the next nine years—and for good reason. Why mess with success?

For 2017, the 645cc DOHC V-twin gets new CAD-designed pistons that feature resin coating on the skirts and TiN coating on other sliding areas for less friction; compression ratio is lowered slightly to 11.2:1 (from 11.5:1) to allow the use of regular unleaded fuel.

Changes to the chassis are centered around ergonomics, with a new slimmer fuel tank and seat (the fuel tank is 2.5 inches narrower at its widest point than the SFV, while the seat is 1.2 inches narrower), allowing the rider to put his/her feet on the ground easier at a stop. Suspension is basically the same nonadjustable 41mm fork and single spring-preload-adjustable shock with some minor adjustments to spring and damping rates.

Throw a leg over the new SV and you immediately notice how much slimmer and smaller overall it feels than the outgoing SFV. The fuel tank no longer seems bulbous from the saddle, and the seat height is the same, but it feels lower because your legs get a straighter shot at the ground. You only need to hit the starter button once, with an “easy start” system turning the engine over until it fires up. The low-rpm assist is another nice feature for novice riders, providing just a hint of throttle to help prevent stalling at take-off.

We can say the new SV certainly retains the original SV’s peppy engine response and amiable character that made the first-generation 650 such a sales success. There’s plenty of low-end and midrange power to zip you out of turns or pass traffic, and that power continues climbing in a nice top-end rush that eventually begins to drop off around 9,000 rpm. Simply put, there’s a generous amount of power to be had almost anywhere in the rev range.

Flicking the new SV into the first set of canyon corners reveals that same nimble yet planted handling feel that endeared the original bike to so many club racers and novice street riders alike.

All in all, though, we really liked the 2017 SV650 and are certainly glad to see the spirit of the original bike return in the latest version. The Suzuki has all the clean styling and spunky personality of the first-gen model but with some new technology added in to put a fine polish on the overall package, retaining yet another feature of the original: superior bang for the buck.

This 2017 Suzuki SV650 is offered in excellent condition throughout, having covered only 800 miles from new. Take a close look at the photos to see the “as-new” condition of the bike. Thoroughly check by local LA shop, Glory Motorworks of Glendale, California, the bike’s mechanical condition reflects the cosmetics.