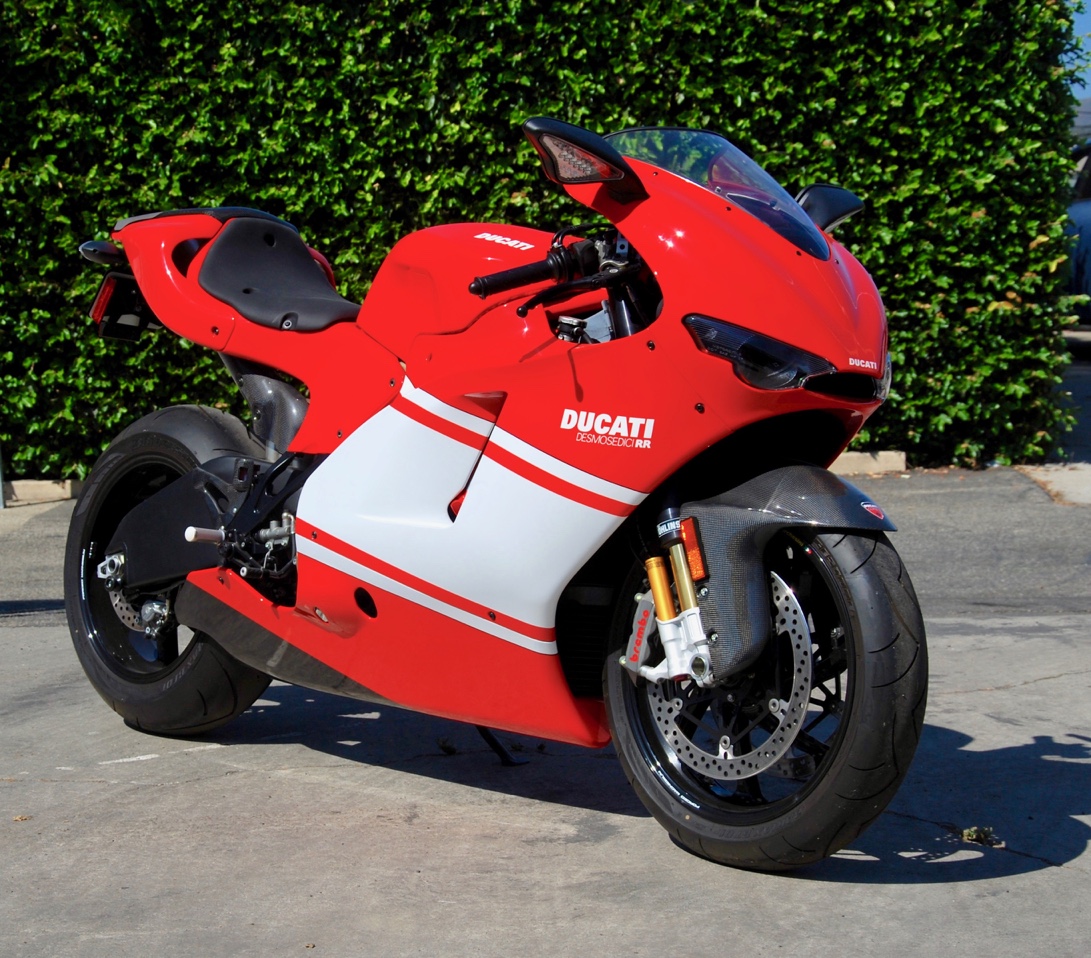 ‘As a road bike, the Desmosedici has the potential to genuinely validate the term race replica.’ – Bikemagazine.

Ducati returned to Grand Prix racing in 2002 after the reign of the 2-strokes, which were simply not in their manufacturing scope, too distanced from their road machines. A firm believer of racing Sunday to boost Monday’s sales, Ducati were back in their element under the new 4-stroke-favoured rules.

They began with the tried and tested format of the V- or “L”- 90° twin cylinder configuration using desmodromic valve technology. However, the weight allowance afforded the twin by the rules, was still not enough to get the bike up to the required speeds to be truly competitive. To get to the 230bhp mark, the bike would have to spin 17,000rpm, making reliability a challenge. Enter the Desmosidici, a contraction of ‘Desmodromic’ and 16 (valves). Essentially, two V-twins side by side, the V-4 could make the power required to be competitive, epitomized by factory rider Casey Stoner in 2007, as he romped away with the MotoGP World Championship title. Other factory teams have handling and braking down, but a thing to behold is to watch the Ducatis simply open the taps and leave under their immense power.

At the Misano circuit in 2004, Ducati had astonished the motorcycling world by announcing that it intended to offer for public sale a low-volume, road-legal replica of its MotoGP racer. Two years later, in June 2006, Ducati unveiled the production version at the Mugello Grand Prix weekend. The Desmosedici RR was based on the 2006 Ducati GP6, raced that season by works riders Loris Capirossi, Sete Gibernau and, in a season-concluding one-off, Troy Bayliss, who secured his one and only Grand Prix victory in the last race of the 990cc era at Valencia. Only 1,500 machines would be produced, with priority of allocation going to 999R Superbike owners, thereby ensuring immediate exclusivity and future classic status of the bike.

In road trim the bike offered up 188bhp, but was supplied with a race exhaust to boost output to the 200bhp mark. The RR’s engine was carried in a truncated trellis frame, just like the GP6’s, with the aluminium swingarm pivoting directly in the crankcase and the seat formed by a structural carbon-fibre sub-frame – a ‘first’ for a road bike. Öhlins suspension at both ends, with mind-numbing setting permutations, Brembo supplying the stopping power and Marchesini the forged magnesium wheels completed a true race replica package. Carbon fiber is all over the bike while the fuel tank is aluminum, bringing the Desmosedici’s scale bragging rights to only 376lb.

Bike magazine reported: ‘Driving urgently and cleanly from low revs to the 14,200rpm limit, the snarling V4 is a masterpiece of internal combustion, delivering warp-drive, vision-blurring pace through gear ratios closer than any other road bike I can think of. It shoots the digital tacho round the clocks in a quick-fire frenzy, building revs with unrivalled velocity, picking up the front wheel in third gear, and blurring the edges of your vision. It’s dominating, intoxicating, beautiful.’

Number ‘889’ was eventually delivered to the first owner, a Northern California collector of European exotica in 2- and 4-wheel configurations. Delivered with negligible miles, he took the bike for a nice spin on a Sunday morning and then placed it on static display in his collection, showing only 40 miles on the odometer. Still with that 40 miles, the bike is offered in perfectly new condition. Complete with all the accoutrements delivered with the bike by Ducati, including second key, race spec exhaust, tools, trickle charger, workshop manual, books, bike cover, sales paraphernalia and a collection of magazine articles. The only missing piece is the rear stand, which was never originally delivered.

Surely every true enthusiast’s dream to own a genuine Grand Prix motorcycle, and this sale represents an opportunity to realize that with impeccable ownership history, condition and unrivalled mileage.