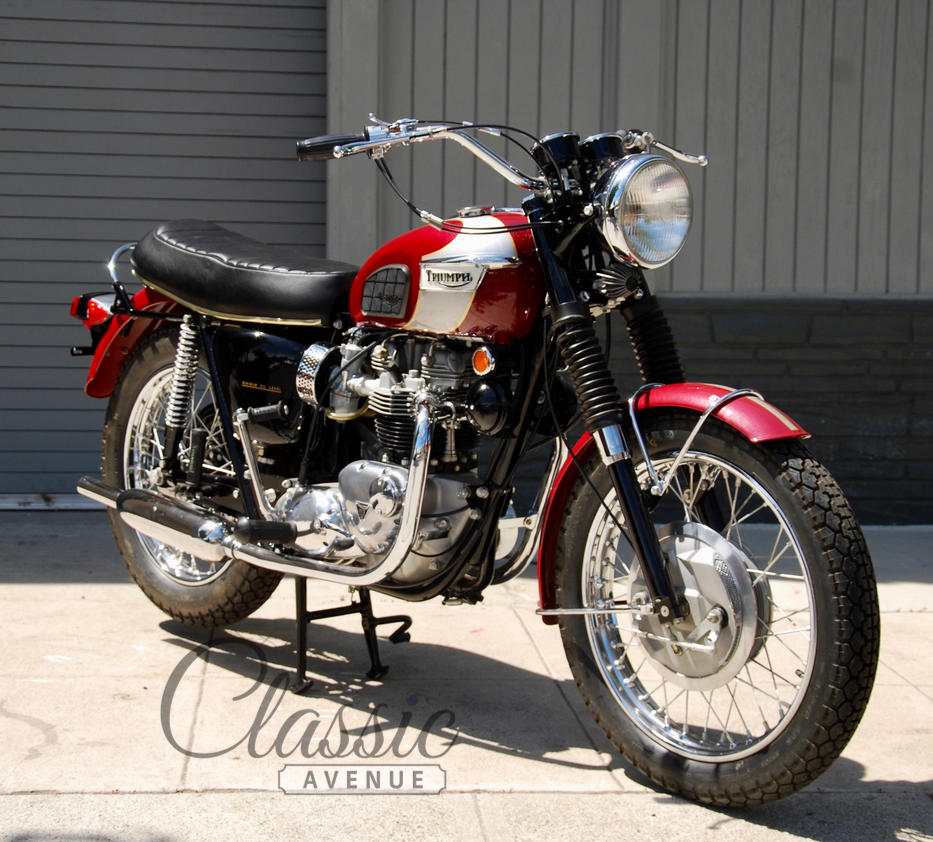 Post-World War II, Triumph’s larger twins remained recognizably similar to the first Speed Twin of 1938. But as the 1960s dawned, unitary construction of engine and gearbox, already a feature of the 350 and 500 twins, was applied to the 650s, launching in the 1963 model year. The café racer’s favourite since its launch, thanks to lusty acceleration and a top speed approaching 120mph, the Bonneville continued in this new form as Triumph’s top-of-the-range sportster. Adjustments to frame design and general specifications over the years, included standardized 12-volt electrics, shuttle-valve fork internals, independently adjustable ignition points, Amal Concentric carburettors and a long overdue twin-leading-shoe front brake. The Bonnie continued essentially unchanged, before the launch of the ‘oil-in-frame’ models in 1970.

Needing to increase the capacity of the 650cc Bonneville T120 to compete in the AMA 750 cc class, Tricor (Triumph’s East Coast US distributor) came up with a conversion kit. The AMA rules required a minimum of 200 machines to be on sale to the public before a machine could be considered for entry into races for the 750cc class. Triumph themselves were not interested in increasing the Bonneville to 750cc, and anyway they had their hands full with the Trident T150. So Rod Coates (Tricor Service Manager), along with Sonny Routt, developed a conversion kit that could be fitted to the 650cc motor.

The kit comprised a cast iron cylinder block, pistons, and ring set. It was fitted to brand new machines by partially in-crating them and replacing the 650 blocks with the kit. To identify the machines, a ‘T’ was added after the T120R engine number designation. It was only added to the engine number, not the frame number. Any purchasers also had to sign a disclaimer that the machine was sold as only for racing and competition.

It wasn’t long before Triumph themselves found out about the kit, and Peter Thornton (busy merging BSA and Triumph) summarily dismissed Rod Coates. As a result only 204 machines were produced, but that was enough to go racing.

This rare, matching-numbers bike offered from the last year of the truly classic Bonnevilles has been in the vendor’s collection for several years. He purchased it in the condition you see here – beautifully restored from the ground-up. It was then placed on static display in a climate-controlled environment alongside classic British bikes and high-end American 4-wheeled muscle. Fresh from a re-commissioning by marque experts, Glory Motorworks, the bike is offered in good riding condition.