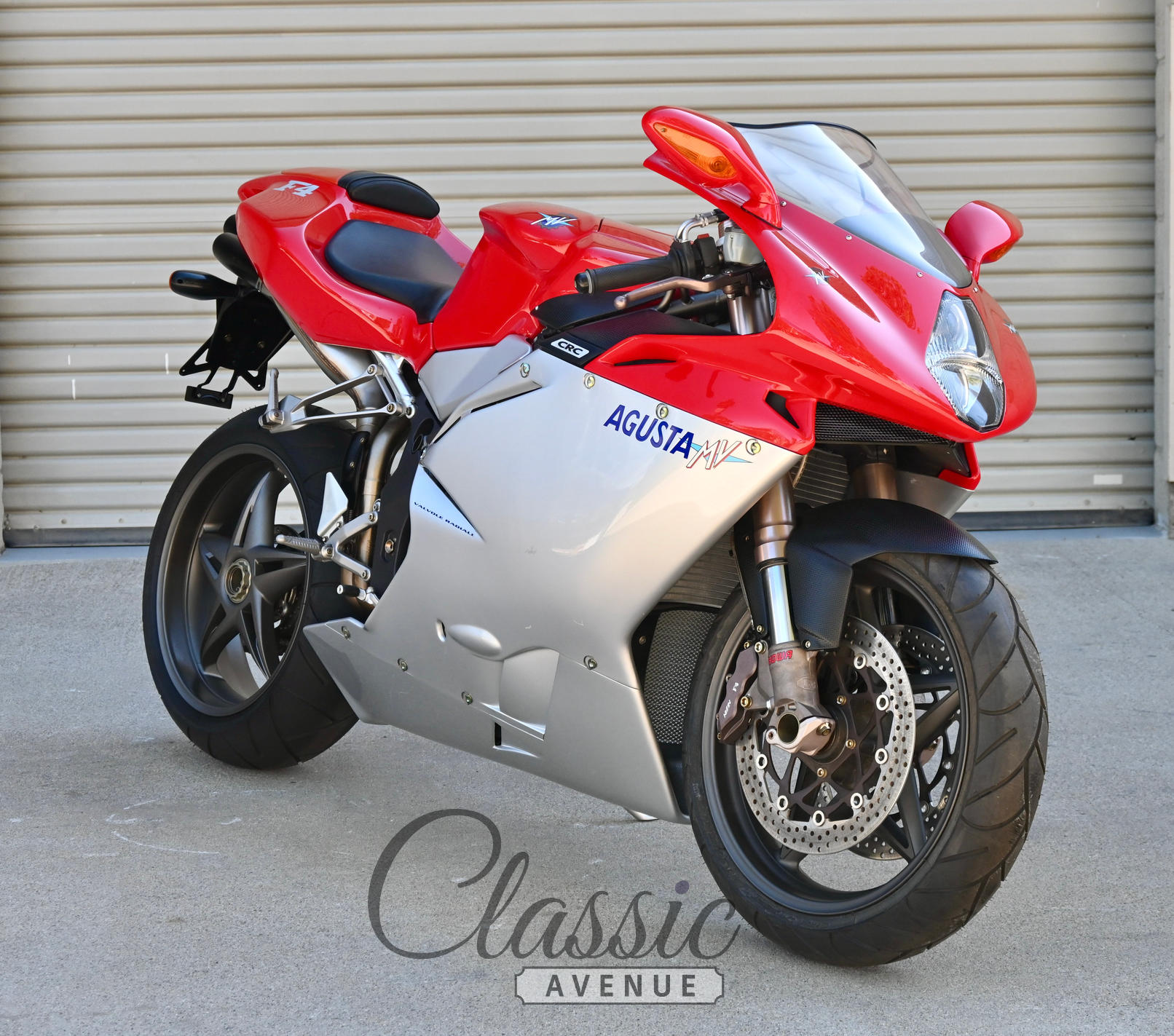 One of the great names in motorcycling, MV Agusta was founded in war-torn Italy in 1945 and was steeped in racing tradition from day one. From opening the business to 1976, the company would win some 270 GP road races and 27 world titles with the likes of John Surtees, Mike Hailwood, Giacomo Agostini, and Phil Read aboard.

Introduced in 1998, the 750cc F4 was met with the very highest acclaim. Cagiva acquired the MV Agusta name as far back as 1991, but it simply took that long to reintroduce the name to the awaiting public with a bike worthy of the name. From the design table of Massimo Tamburini, who also penned the seminal Ducati 916, the F4 was a high-revving 750cc four-cylinder, painted red and silver just like the old racer winners, and with a trademark quad array of high-mounted exhaust tips, known as the pipe organ.

The F4 employed a tubular-steel trellis frame, broadly similar to the Ducati’s, beneath which the water-cooled double-overhead-camshaft 16-valve engine was suspended. The latter was designed by Ferrari and is unique among modern multi-cylinder motorcycle engines in so far as each cylinder’s four valves are disposed radially, rather than as opposed pairs. Equipped with a state-of-the-art Weber-Marelli engine management system, this lightweight and compact power unit produced a class-leading 126bhp. A cassette-type six-speed gearbox enabled ratio changes to be made without splitting the engine.

The rear suspension is fitted with the revolutionary Sachs Racing shock absorber that belongs to the same family as those used in Formula 1 racing. The unit is more than1200 grams lighter due to absence of a gas reservoir and is fitted with rebound-compression (high speed/low speed) damping and spring preload adjustment as well as hydraulic control that makes calibration easier and more accurate. Up front, upside Showas and stopping comes courtesy of Brembo. And to stop her shaking her head, there’s a transversally fitted Ohlins steering damper.

The F4 on offer here, is something of a unicorn. Through two owners in the last 22 years, the bike has never turned a wheel under its own power. Purchased by original owner, David Hall of Vienna, Virgina, and then by its subsequent owner to be enjoyed pride of place as living room art. The original battery (pictured) was never connected or even had water added. The bike retains original tires, all stickers remain on the windshield and the two original keys have never been separated.

An unfortunate scuff on the side of the fairing (pictured) is the only blemish with fading around the edge of the pillion seat pad.

The Tamburini-designed 750 F4 is widely acknowledged as one of the most beautiful motorcycles ever made, and with only 4km on the odometer, this must be the most collectible example ever offered for public sale. Not one to be missed.