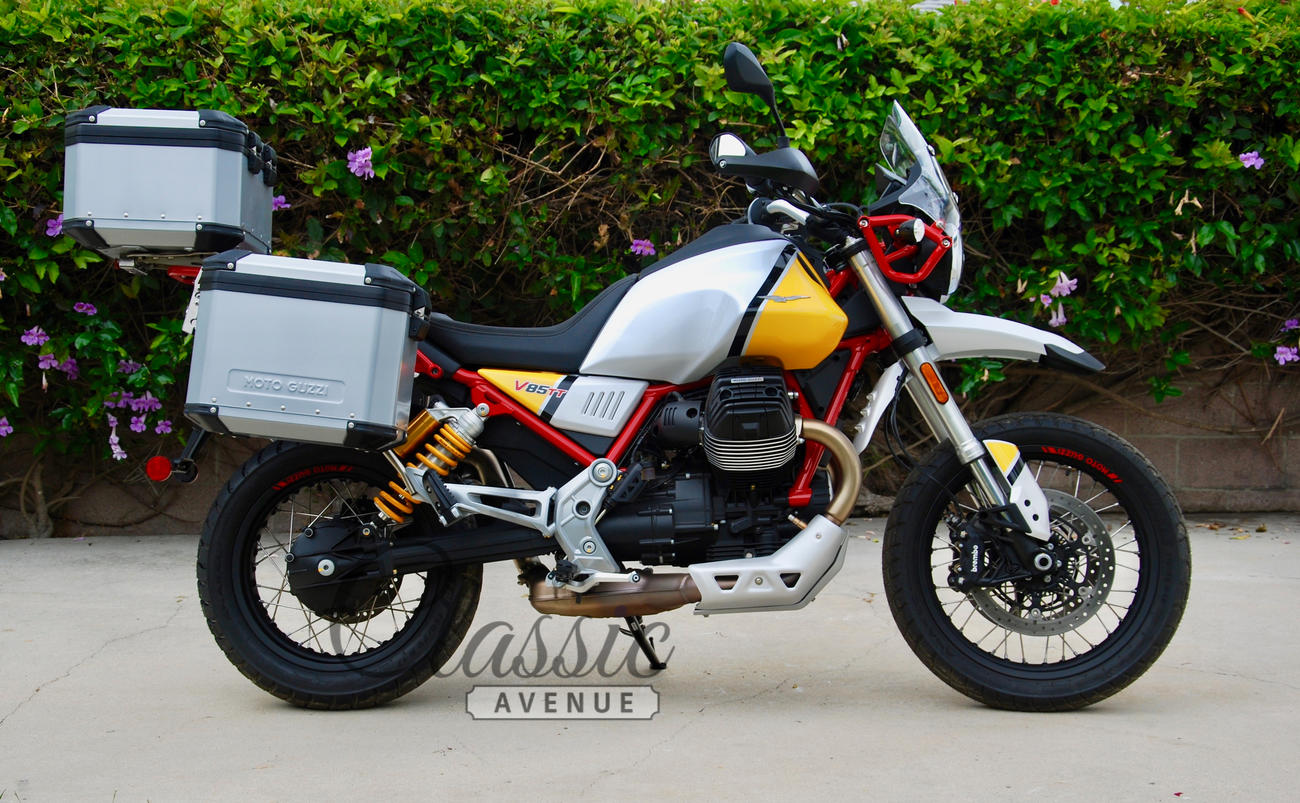 “In a class of eminently capable middleweight adventure bikes, the V85 TT carves out a niche that no one even thought to consider. The adventure category is highly technical and modern, so, this vintage-styled machine instantly stands out. Beyond its retro appearance, the V85 TT Adventure has an unlikely amount of off-road chops that complement savvy street manners.

The V85 TT has some advantages that the competition doesn’t. To begin, let’s home in on what is emanating all of that classic Moto Guzzi character—the 853cc air-cooled transverse V-twin. It is what makes a Guzzi a Guzzi, after all. And yet, the V85 TT marks a turning point for the brand, as it adds a level of refinement that hasn’t been seen before.

Chock-full of personality from the moment you hit the starter button, the 853cc engine rumbles to life with a burbling 2-into-1 exhaust that lets out a hearty note that never becomes overbearing. Thanks to new counterbalancing, the V85 TT delivers the revered Guzzi vibes, sans excessive shaking.

Cracking the throttle is smooth, tractable, and welcoming, offering the kind of performance that nearly anyone can settle into, with 80 horsepower at 7750 rpm and 59 ft-lbs of torque at 5000 rpm, according to the dyno at the factory in Mandello del Lario, Italy.

Once you’ve released the light clutch, you’ll be met with a satisfying amount of torque that leads a waltz into a potent midrange. Unlike Guzzis of the past, it doesn’t peter out when you keep it pinned—it will pull to the redline.

That newfound level of performance isn’t a coincidence; it’s the direct result of significant upgrades while utilizing similar architecture to the V7 III powerplant. The traditional pushrod valvetrain is still in play. New titanium intake valves, aluminum rods, revised roller tappets, a new low-profile piston, and a redesigned crankshaft are responsible for the complete change in character for this eagle-badged beast. You even get an oil-level window on the cases these days.

In a word, the V85 motor offers a gentlemanly amount of performance, revving up with urgency, but not too frantic. It will punch a hole in traffic instantly and see you using all of the delicious torque to lunge out of corners in the canyons, without making your hair gray out prematurely. This is what a street bike should be, and it doesn’t boast triple-digit horsepower figures that can make riding off-road a wheelspin-inducing mess.

The refined V85TT offers a vintage aesthetic steeped in modern technology with ABS, traction control, and three preset riding modes. Four-piston Brembo calipers handle braking with 320mm rotors in the front. In the rear, a dual-piston caliper grabs on a 260mm caliper.

The V85 TT Adventure comes standard with panniers and a top case for all of your touring needs with a massive amount of storage space. They are installed and removed easily enough. Conveniently, you can comfortably stash a single full-face helmet in the top case.

The V85 TT Adventure is entirely capable of completing the type of off-roading that most adventure riders will be doing in their careers. The other machines, again, are going to be better at it, but this is where the touring potential bubbles through. So, pack those panniers full of camping gear, and toss a dart at the map with a mind to hit the road and trail. If you want something undeniably unique, the 2020 Moto Guzzi V85 TT Adventure is worth a test ride.”  ~ Nic de Sena

An avid motorcyclist off the screen, the McGregor collection is dynamic and varied and everything gets ridden. This collectable V85TT Number 0001 was acquired by Ewan in August of 2019 with only 3 delivery miles on the odometer and displayed in his collection. Now, with only 107 miles on the clock, it is ready for the next custodian. In Giallo Sahara livery reminiscent of the 1986 Paris-Dakar entrants, the striking machine is offered in just about as-new, perfect condition throughout.

This very capable retro-tourer comes complete with all owner’s manuals, all keys and a clean, clear title in Ewan McGregor’s name. An autographed poster accompanies the sale.