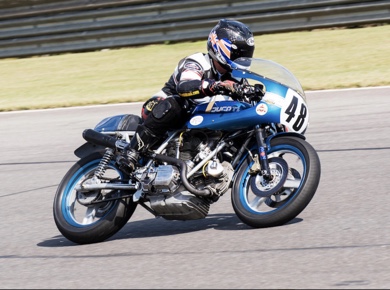 1975 Ducati 900 SS Superbike Prototype. When BMW withdrew from racing after dominating the debut AMA Superbike Championship in 1976 with its R90S Boxer twins, it left assorted privateers to fly the twin-cylinder flag against the faster, more powerful, Japanese fours.

None did so more effectively than Massachusetts Ducati tuner George Vincensi, who while often overlooked compared to his higher-profile rival tuner Reno Leoni, was equally successful during the time they competed against each other with desmo V-twins. But unlike Leoni who was officially sponsored by the US Ducati importers Berliner Motor Corporation, Team Vincensi was entirely self-supporting, racing independently of Berliner using George’s own money, plus whatever he was able to cadge from friends and small sponsors. Yet that was in spite of working for Berliner as its New England District Manager!

From 1974 onwards Vincensi was a regular race-winner in New England club racing with a self-prepared green-frame Ducati 750SS Imola replica, especially in Endurance events. But when the AMA Superbike series was announced for 1976 he bought the 900SS from Berliner that he was using as a street demo to visit dealers, and made it into a Superbike to enter a faster rider on.

This was one of two pre-production prototypes assembled in the Bologna factory race shop early in 1975, using a prized green 750SS frame with serial no. DM750SS 075858, fitted with the then-new big-bore square-case 864cc engine. Both these came to the USA as demonstrators for Berliner to promote the arrival of the production model later that year. One was assigned to Vincensi for sales duties, and he duly rode it around New England for nine months visiting dealers, before purchasing it from the company.

Kurt Lentz debuted the Vincensi Ducati 900SS demo-bike-turned-racer in the first-ever AMA Superbike race at Daytona in March 1976, finishing sixth. Thereafter he raced it in New England Regional events, invariably placing in the top three until Kurt badly injured himself crashing the Ducati into the Loudon lake, and ending up underwater!.

After rescuing his Superbike from the lake Vincensi found another rider named Richard Schlachter, who went on to win countless races on the Ducati at all levels, including setting the all-time outright track record at Bridgehampton, which still stands today, although the track closed. Future manufacturer Erik Buell also raced it once, only to DNF with a broken crank.

For 1979 the AMA Superbike series was reduced to just four rounds, with Schlachter finishing 12th on the Vincensi Ducati out of 52 starters in the season-opening Daytona 100-miler. But its next race on June 17, 1979 was the Ducati’s finest hour, when in the AMA Superbike National at Loudon Schlachter fought a furious battle for victory with fellow local expert Mike Baldwin on the factory Kawasaki KZ1000. Schlachter used the Ducati’s greater agility and its extra torque to take the lead and score a famous victory – the last AMA Superbike win for Ducati for 14 years.

Schlachter’s win brought him a Kawasaki contract, so future IoM TT winner Dave Roper rode the Vincensi Ducati at Sears Point but crashed it, with Johnny Bettencourt taking over to place 6th at Laguna Seca. But for 1980 Schlachter returned to race the Ducati, though he retired from the AMA Superbike races at Daytona and Road America and could only finish 11th at Loudon where he’d won the year before. But in 1981 the new Battle of the Twins class kicked off at Daytona, where despite being a last minute stand-in and thus starting from the back of the 65-bike grid on a half-faired bike running in the Modified Production class, Schlachter rode through the field to within ten feet of race-winner Jimmy Adamo on the full-fairing Formula 1 Leoni Ducati after posting a record 162mph on the bankings in the 50-mile race. He thus won the Modified Production class and got second overall in the bike’s final race in Vincensi’s ownership.

Vincensi sold the Ducati to amateur road racer Jerry Wood in 1982, who campaigned it in New England club racing for the next two decades, eventually selling it back to Vincensi in 2002. George Vincensi undertook a complete restoration, returning the bike to the same half-faired BoT-MP guise in which Richard Schlachter last raced it at Daytona in 1981. The 864cc engine employs a stock crank fitted with factory race kit double-web conrods, and modified stock pistons delivering 12:1 compression. It has ported and gas-flowed 750SS cylinder heads with twin sparkplugs and oversize 42mm intake/38mm exhaust valves operated by factory race camshafts, and carries 42mm Malossi carburettors and a Ducati kit race exhaust. The extensively lightened 900SS’s five-speed gearbox has been modified by Vincensi to save weight, resulting in a light 162kg weight with no fuel. The stock Ducati frame is as George Vincensi modified it in 1977, with a two degrees tighter head angle to sharpen the steering geometry.

This two-owner motorcycle has been completely restored and race-prepped for the track by the same man who first took it racing over 40 years ago. It was track tested for a magazine article by Alan Cathcart at the 2015 Barber Vintage meeting, and is sold with the original Manufacturer’s Statement of Origin in George Vincensi’s name.