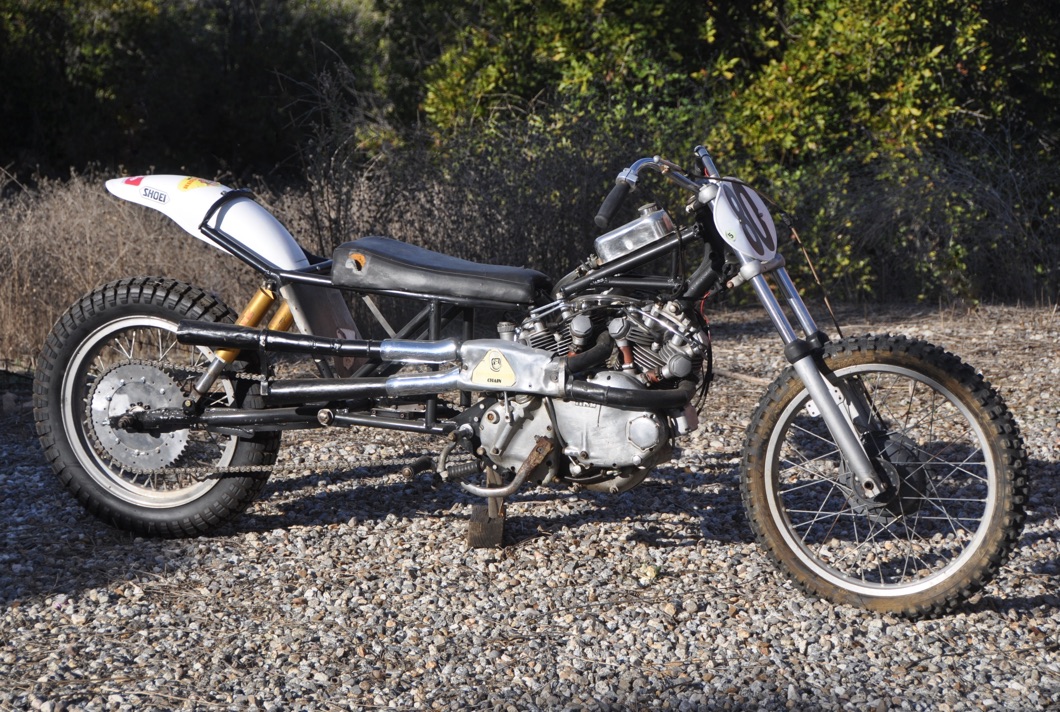 1947 Vincent 750cc Series B Rapide. This fearsome, multiple title-winning hillclimber may be one the most famous Vincents you’ve never heard of – certainly it is one of the most successful Vincent racers ever, winning a total of five national championships in two countries. Prior to all that competition glory, the Vincent was a humble, used-up 1947 Rapide purchased as a $50 junker in the late 1950s. It was constantly modified over the next 20 years, the chassis stretched, the motor pumped up, turning it into one of the dominant machines in AMA Class A Professional Hillclimbing.

Hillclimbing at its highest levels is in essence a vertical drag race, run on impossibly steep slopes littered with rocks, ruts, roots and jumps, the more the better. This bike’s original builder/rider Glen Kyle figured that a Vincent V-twin, then the world’s fastest motorcycle, would make a great uphill missile. But first some engine work was needed as Class A rules set maximum displacement for overhead-valve engines at 750cc. Kyle debored and destroked the 1000cc Vincent to meet requirements, then fitted BSA pistons, an Alpha crankpin, a Joe Hunt magneto, Black Lightning camshafts and dual 1¼” Dell Orto carburetors inhaling a potent witch’s brew of 70% nitromethane fuel. Because there was no time for shifting gears during the short, violent climbs, Kyle ran the transmission as a one-speed and utilized the remaining empty gearbox space to hold engine oil.

In handwritten notes that accompany this sale, Kyle says, “It was a good, strong engine, and it served me well.” Which is something of an understatement as the nitro-burning short-stroke Vincent delivered three AMA Class A Championships in 1963, 1965 and 1966 with Kyle in the saddle.

In 1967 Kyle sold the bike to up-and-comer Malcolm “Beese” Wendt, already a Class B champ looking to move into the Pro division. With coaching from Kyle, Wendt came to terms with the Vincent’s hard-hitting power, winning the Canadian Class A title in 1968 and the AMA crown in 1969, giving the Vincent five national championships in two different countries. Wendt was also the top Pro hillclimber in AMA District 6 for eight years running on the Vincent.

During his ownership, suspension ranged from rigid at both ends to the Ceriani forks and dual Kayaba gas-charged shocks seen here in its last-raced form, with the swingarm growing in length over the years. Proper Venolia racing pistons replaced the repurposed BSA slugs, and Chrysler Hemi intake valves were machined to fit the stock valve guides, both changes helping to cope with the 98% nitro mix Wendt sometimes ran. He eventually incorporated three Black Lightning primary clutch friction plates, and dropped the hammer via a left-side foot lever, in order to keep both hands tightly on the handlebars during the all-important launch up the hill.

Cycle News was on hand to record one of Wendt’s last wins on the Vincent at the Freemansburg, Pennsylvania AMA Hillclimb in 1979, by which time seeing a Vincent at any racing venue was becoming a rare happenstance. “The best ride of the day, by far, belonged to two-time national champ Beese Wendt,” CN wrote. “Beese rode his Vincent V-twin flawlessly over the 500-ft. three-breaker Freemansburg cliff for an 8.55-sec. 750cc Pro winning climb. The shattering bellow of the 750cc fuel V-twin wearing megaphone exhausts announced its authority to the crowd, leaving the less-knowledgeable wondering, “What the hell is a Vincent?”

In this hillclimber’s case it’s one of longest-running, most-successful Vincent competition machines, preserved in as-raced condition, a true piece of American motorcycle history. An extensive documents file accompanies the bike, as does the traction-grabbing chain “paddle” for the rear wheel and eight of the Vincent’s championship trophies.