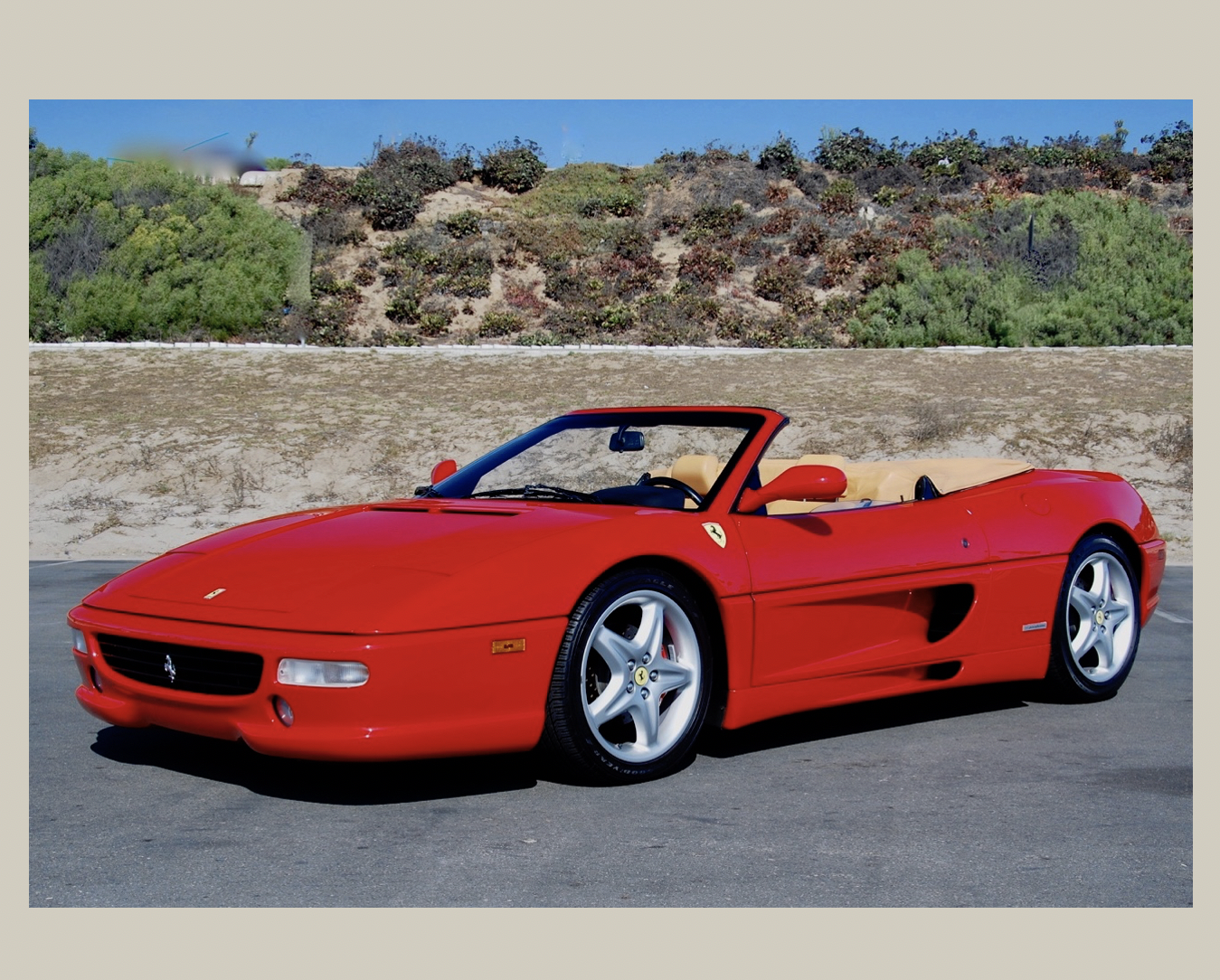 With roots firmly established in the 246GT Dino of the late 1960s, the natural progression of the model through 308, 328 and 348, showed development in style, reflecting fashions of the day and increases in power, the F355 was introduced to the press in May 1994. Very much a driver’s Ferrari, the car sported 3.5 liter four overhead camshafts and five valves per cylinder V8 power, through a 6-speed transaxle. 375bhp on tap with 268 lbft of torque would round out the model range alongside the 550 Maranello and 456GT, but with great balance and poise, it would lap the Fiorano test track 3 seconds fast than the formidable 512TR. Autocar achieved a 0-60mph time of 4.3 seconds and a top speed of 173mph. “A landmark car for Ferrari”, they wrote, “the best sports car Ferrari has turned out since the 246GT Dino some 30 years ago”.

The car on offer, one of only 2046 355s produced, is from a local Southern California enthusiast. The first owner, Jeffrey Keys, of Boulder, Colorado, took possession of the car in February of 1996, delivered from Ferrari of Denver. He drove the car for 8,600 miles before trading it in with Symbolic Motors, of La Jolla, California in April of 2004. Symbolic traded the car with Ferrari of San Diego a few months later, who then sold the car to the second California owner. That custodian enjoyed the car for four years and 8,000 miles until acquired by our vendor in 2008, showing a mere 16,000 miles on the odometer. Now, with only 22,300 miles, the car is offered in exquisite condition throughout. Meticulously maintained by Fast Cars of Redondo Beach, Califiornia, who have recently gone through the car to ensure all systems work as they should, at a cost of $22,000. This included more mundane items like a replacement hood strut, all fluids checked/topped off/changed, seat mechanism overhaul and new wipers, to more critical parts like replacement radiators, left and right, and Catalytic Converter Temperature ECU. They also cleaned all “sticky” interior panels and a repair to the rocker panel. In August 2019, Fastcars, Ltd. also performed an engine-out timing belt service.

The car is superb. Fresh from maintenance, the car feels taut and vibrant. It starts easily and idles smoothly. Press the pedal and she is eager to go with great responsive power. It shifts perfectly through a smooth light-action clutch operation and the proportional power-assisted steering points it precisely where you want to go.

The soft top works precisely as it should.

Cosmetically, the car is excellent. Paint is superb, having been recently detailed with a very minor blemish on the edge of the front hood about the size of a pencil tip (pictured). The interior is also excellent with minor wear to seat, panel and carpet surfaces, conducive with the mileage and age of the car. The seat bolster is scuffed from ingress and egress of such a low sports car – an easy repair but left to show the originality of the car.

All in all, this is a fantastic Ferrari from a more analogue time, fast, comfortable and relatively easy to own. Certainly, inspections are encouraged.