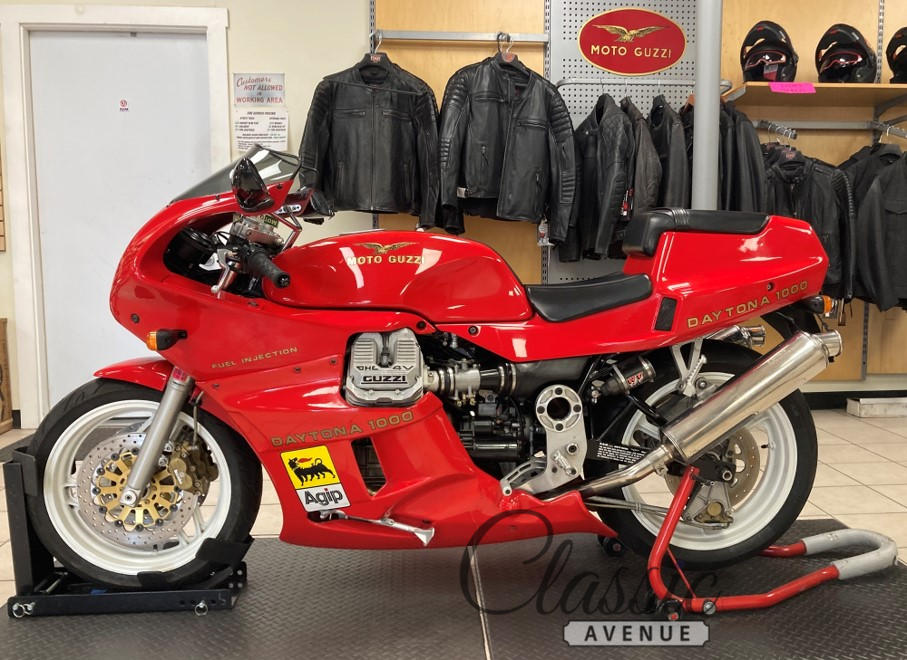 1991 marked a revolutionary milestone with the employment of 4-valves per cylinder by Moto Guzzi for their liter superbike. From successes in the AMA sanctioned Battle of the Twins series, this new machine was named “Daytona”. The firm also switched from carburetors to Weber-Marelli fuel injection for its new flagship model, which produced 95bhp, a 10% increase over the old Le Mans 1000. The engine was mounted in an all-new mono-shock chassis with a hint of retro styling. The model didn’t last long until the company returned to the far more mundane 2-valve/cylinder machine line-up. Only 283 were produced, with only 51 coming the shores of the US. Only 17 of those were the Biposto model, as the motorcycle here.

The 1993 Moto Guzzi Daytona 1000 Biposto on offer here comes from an Arizona collector, who has owned the bike since 2009, purchasing it from the original owner. It features the super rare lower fairings made for the bike for the Italian racing series, and with only 12,175 miles on the odometer, believed to be original, the bike is reported to be in exceptional condition, having been lovingly maintained and stored between rides. The bike includes

After his team of modified Moto Guzzis won the 1984 and 1985 U.S. Endurance Championship and the 1987 Pro Twins series, U.S. Moto Guzzi guru Dr. John Wittner was made an offer he couldn’t refuse. Summoned to Italy by Guzzi godfather Alejandro de Tomaso, Wittner, a former dentist turned endurance racer, was asked to help develop a new world-beating superbike. Guzzi revealed a prototype at the 1989 Milan show and named it for the famous Florida circuit (where they won the 250-mile endurance race in 1985), but in typical Italian fashion it took until late 1991 for the Daytona to go into production.

Although the hot rod Daytona engine was based around the classic “big block” air-cooled Moto Guzzi transverse V-twin, in the end it retained only the crankshaft and crankcases of the standard engine. Using the 78mm stroke of the 948cc Le Mans 1000 combined with new plated alloy cylinders with a 90mm bore, it displaced 992cc. A bright red sport fairing melded into the gas tank just above the Daytona’s all-new cylinder heads, grandly marked “OHC 4V” for overhead camshaft 4-valve. In truth, the cams were carried high in the cylinder heads, not on top, so the engine could also be considered a high-cam design overhead valve.

From the crankshaft, a reduction geartrain drove a pair of toothed belts, each spinning a single camshaft in each cylinder head, which in turn opened four valves via short pushrods operating rocker shafts. Fueling was by Weber-Marelli electronic injection, and the exhaust system was in stainless steel. The engine drove a revised version of the 5-speed transmission used on most Guzzi twins through a beefed-up clutch (with 10 springs versus eight) and a driveshaft to the rear wheel.

With a claimed 95 horsepower available at 8,000rpm, the Daytona was the most powerful road-going Guzzi to date, returning a top speed of 145mph. “The result is excellent rideability, with big-time low-end and midrange power available whenever you open the throttle,” Cycle World said of the big twin in 1993. On the road, they found that being long and low in Guzzi tradition gave the Daytona reassuring stability at high speeds: “The Daytona proved unflappable, with well-damped suspension, plenty of cornering clearance, premium tires and a relatively flickable yet very stable nature.”

The updated 992cc engine was designed to squeak in under the 1000cc limit for various racing classes and is claimed to be overhead cam as well, but it’s really more “high-cam” as the heads do each have a cam, but the valves are actuated via pushrods and rockers, and the bike lacks liquid-cooling. Power was a respectable 92hp and with high-quality WP suspension the bike did handle well, although significant weight compared to other sportbikes meant fast riding was hard work. That longitudinal engine layout means you do still get some torque reaction accelerating out of a corner, but it’s relatively minor and something that you adapt to quickly.

Witnner’s Guzzi efforts resulted in wins in both the 1984 and 1985 U.S. Endurance Championship and Wittner eventually went to Italy to work for Moto Guzzi.  One result of his efforts was the Guzzi Daytona edition, which had an updated engine that was in a new spine frame based on Dr. John’s race bike design, including a monoshock under the seat and Brembo four-pot calipers with 300mm dual discs (two-pot/260mm rear) provided stopping power.  The result was a significantly improved ride over other Guzzis of the era, with power available whenever you open the throttle.