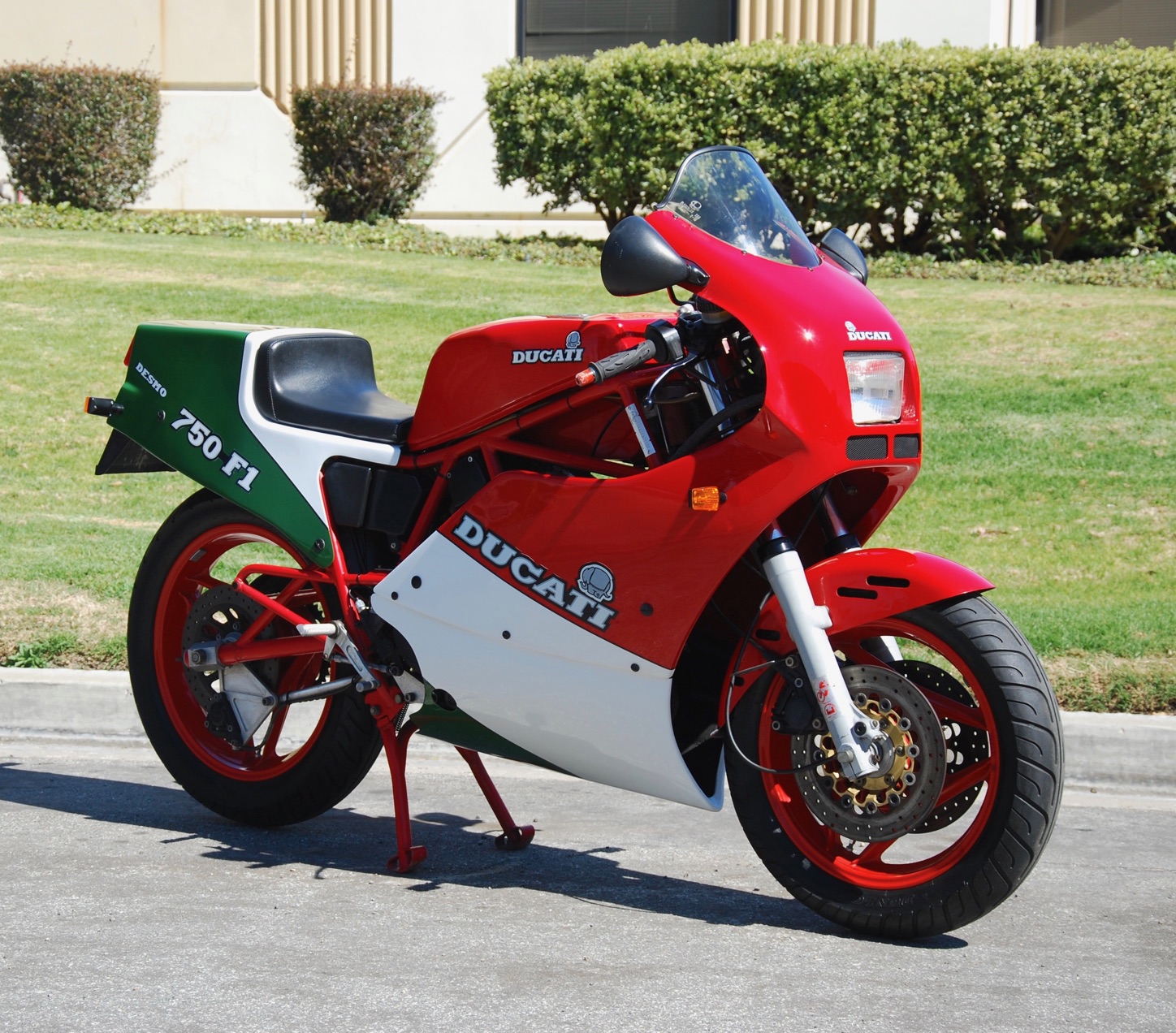 1986 Ducati 750 F1B TriColore. Considered by many enthusiasts to be among the last of the ‘real’ Ducatis, the race-styled 750 F1 first appeared in 1985. Ducati had already enjoyed considerable success with its Pantah-derived F2 racers in FIM Formula 2 racing, so a ‘750’ version was the logical next step, and the F1B was a 750cc TT1 for the street.

First seen in prototype form in endurance races in 1983, the F1’s 748cc engine was the latest in a long line of stretches applied to the original 500c ‘belt drive’ desmo unit that had first appeared in the Pantah in 1979. A markedly over-square design of 88×61.5mm bore/stroke, the F1 engine produced around 60hp and functioned as a stressed element within the frame, the swinging arm pivoting in the rear of the gearbox. Clearly visible above the deliberately cut away fairing sides, the aforementioned frame attracted almost as much attention as the engine: a trellis of short, straight tubes. In the fashion of the day, the F1 came with a 16-inch front wheel, while braking power was provided by state-of-the-art triple Brembos.

Unlike other bike-makers who had forgotten the ‘light is right’ design philosophy, Ducati did not have the luxury of prodigious amounts of horsepower from its air-cooled 748cc V-twin, so the F1A and B models weighed in at less than 400 lb dry. The lessons taught by Fabio Taglioni on the racetrack, dating all the way back to the 1950s singles, were proven yet again. And it wasn’t just Sunday-morning backroad riders discovering the advantages of light weight and torquey powerbands. While the 750 Ducati was easily outpowered by its four-cylinder rivals in frontline race series, a new class, Battle of the Twins, was on the rise, especially in the U.S., where Ducatis soon became the ride of choice.

In 1985 Ducati was caught between a rock and hard place – mostly from the pressure of the Japanese motorcycle industry beating them at their own game but also from the own poor financial management – though they were still in business making engines for Cagiva. This enabled Cagiva to take over the business that same year and the 750 F1 helped save the day. The F1B and the three Special Editions tidied the company through to the ‘water-cooled, four-valve era, the 851/888 through the ultimate savior, the 916 in 1994. The F1B can rightfully take its place in the middle of Ducati’s new beginning!

This F1B comes from a private collection of sport bikes and remains to its original specification apart from a change of indicators. From static display, the bike has had life breathed back in it with fantastic results. The recommissioning was minimal, and the bike now starts easily on the button and revs freely with a thunderous soundtrack. The bikes stops and goes around corners as well as the fabulous Tri-colore livery looks.