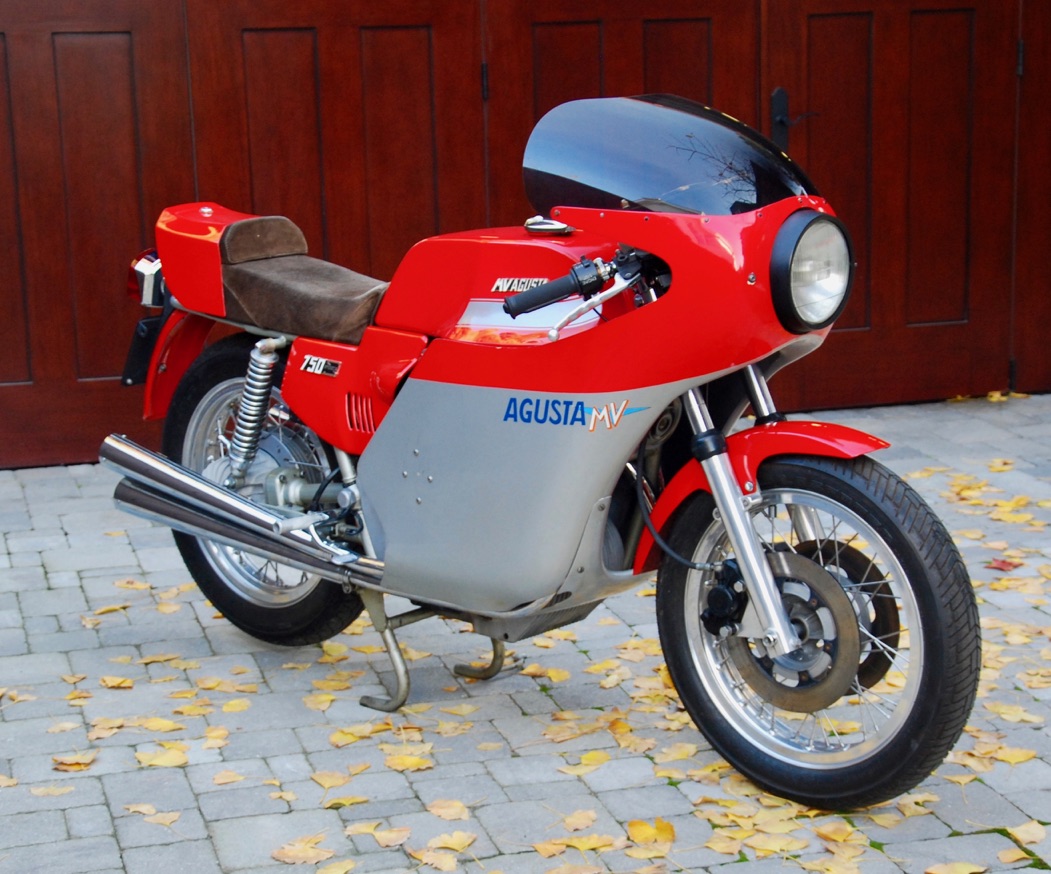 1976 MV Agusta 750S America. The MV (Meccanica Verghera) Grand Prix story has to be just about the greatest in history, winning everything that was worth winning on the World’s stage from the late 1940s to the late 1960s and beyond. In 1945 Count Domenico Agusta was forced to seek an alternative use of his family’s aero engine factory, forbidden to manufacture aircraft engines following Italy’s defeat in WW2. The Count turned to motorcycle production, and it was the birth of a legend; MV went on to win no fewer than 37 World Championships between 1952 and 1974.

From 1965 MV developed a long line of highly successful multi-cylinder racers. Increasing public demand for power and the Gallarate manufacturer obliged. In 1968 the 750cc ‘S’ was released. With very limited production of the hand-made exotic, the 750S was way beyond the financial reach of the average enthusiast. Marque specialist Mick Walker rode a nice example for his book MV Agusta Fours: ‘The experience was unique; the rider was transported to a different level and made to feel really special. There was certainly a pronounced “feel-good factor”.’

In 1974 MV was persuaded by the US importer to create the 750 America. Designed by new-hire, ex-Ducati designer Fredmano Spairani, they were convinced that there was an untapped market for an expensive luxury motorcycle in the US. Released in 1976, the 750S America was bored to 789cc, with a claimed 75bhp, an output sufficient to propel the Italian sportster to 100mph in around 13 seconds and on to a top speed of 135mph. Although factory records are far from conclusive, the dramatic 750S America did not sell in great numbers, and it is believed only 540 left the factory before production ceased in 1979.

The first year 750S America on offer here was part of the very discerning collection of Southern California’s Mars Webster. From the accompanying history file, the original Alitalia Air Waybill shows the bike’s import to the US on May 21st, 1976 to Cambridge, Mass. It remained unsold until August 21st, 1978, as determined from the original warranty card from Cosmopolitan Motors to selling dealer, Freeman Cycles in Beverly Mass. Little is known until purchased by John Bick of Beverly, Mass. in August of 1996 with only 726 miles on the odometer. Mr. Bick owned the bike for a decade until transferred as a late Christmas present to himself to Mars on December 29th, 2006 with undisclosed mileage. Now, 24 years on, the bike shows only 3,467 miles, and is believed to be original and accurate.

In excellent condition throughout, the bike was recently overhauled by marque expert, Yoshi Kosaka of The Garage Company. The gas tank has a ding (pictured), but a second tank in excellent condition accompanies the bike, along with two rear seat cowl units, one in excellent condition, front and rear lighting, side panels and the Magni flat black exhausts, preferred by many. Also included are the original indicators in perfect condition, removed for a more sporting look. In the file are receipts and correspondence with original sales brochures, literature, and manuals.

Mars obviously considered the machine to be a jewel of his collection, showing the bike at several concours events, including The Legend of the Motorcycle, where he met the inimitable Giacomo Agostini and had him sign the gas tank.

Now, the 1976 MV Agusta 750S America presents perfectly down to the real suede seat cover – testament to the care with which the bike was ridden, stored and maintained.

This is a perfect opportunity to acquire an icon of classic Italian exotic motorcycling in exquisite condition.