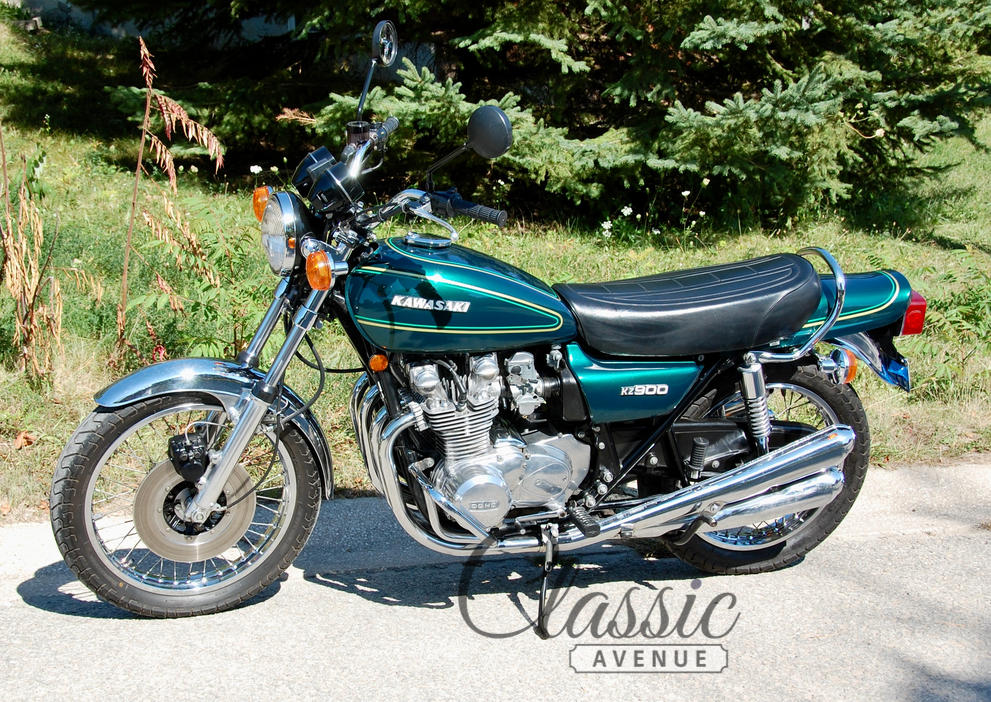 In 1976, Kawasaki was putting the final touches on its next big-bore challenger, the soon-to-be-released KZ1000. Until then, the top of the line was the KZ900, essentially a dressed up Z1, only better.

Starting in 1967 and working into 1968, Kawasaki was designing “a Super-cruiser, a machine to replace the legendary Vincent HRD of yesteryear.” At least, that’s how Ivan J. Wagar, writing in the October 1972 issue of Cycle World, described the unlikely code-named New York Steak project. Kawasaki’s research indicated the market was hungry for a reliable, large-capacity motorcycle capable of high performance that, when asked, could also be a decent touring machine.

Kawasaki engineers were well underway with a mocked-up machine equipped with a 750cc 4-stroke engine when Honda burst their bubble with the CB750. Work stopped on the project, but Kawasaki picked it up again in 1970 and decided to go ahead with its original plan, which was, Wagar wrote, a big bore bike with “good handling and brakes.” It was to be fast and comfortable “along with low noise and emissions as design criteria.” According to Wagar, Kawasaki engineers were still aiming for a 1972 production target.

Ben Inamura, an engineer Kawasaki inherited with its acquisition of Meguro, was responsible for engine development. Contemporary press reports indicate he was simply instructed to build an engine “that works,” whatever the engine capacity. Honda’s introduction of the CB750 helped underscore the fact Kawasaki’s new 4-cylinder engine would have to be larger than 750cc. In this case, it was 903cc.

North American testing began in February 1972, and by mid-year Kawasaki finally delivered the code-named New York Steak as the Z1 900. The Z1 became a 1973 model-year machine, and when it was introduced, it was the largest and most powerful 4-cylinder 4-stroke Japanese motorcycle ever built.

The mill went into a double-cradle, single backbone tube frame with a stocky rear swingarm. Up front was a 19-inch spoked wheel with an 11.5-inch disc brake, while an 18-inch spoked wheel with a large 7.9-inch drum brake was at the rear. Not many bikes on the road had the distinctive style of the Z1, with its streamlined front fender and slim gas tank and saddle. The paint was a distinctive Candy Brown and orange or a green and Candy Yellow.

Lifting the seat revealed the battery, a tool kit and the paper element air cleaner. Beneath the left side cover Kawasaki placed a small oil tank to dole out lubricant to the massive 0.75-inch pitch endless (no master link) final drive chain, larger than what Harley-Davidson fit to their Electra Glide. Overall, the Z1 weighed in at 544.5 pounds wet.

1976 Kawasaki KZ900 A-4 offered here features correct date codes for all date stamped parts and the distinctive green paint is believed to be original. Our vendor has owned the bike since 2018, and has always been keen on regular maintenance, always keeping it clean and “ready to go” (the bike just had the oil changed, and carburettors cleaned, balanced and tuned).  The odometer reads 13,325 miles, which is believed to be genuine, original mileage. Ridden within the last month, this museum quality bike is in great mechanical condition, and is accompanied by original owners manual and full toolkit. Please note, the tires date back to 2001 and it is recommended they are replaced.