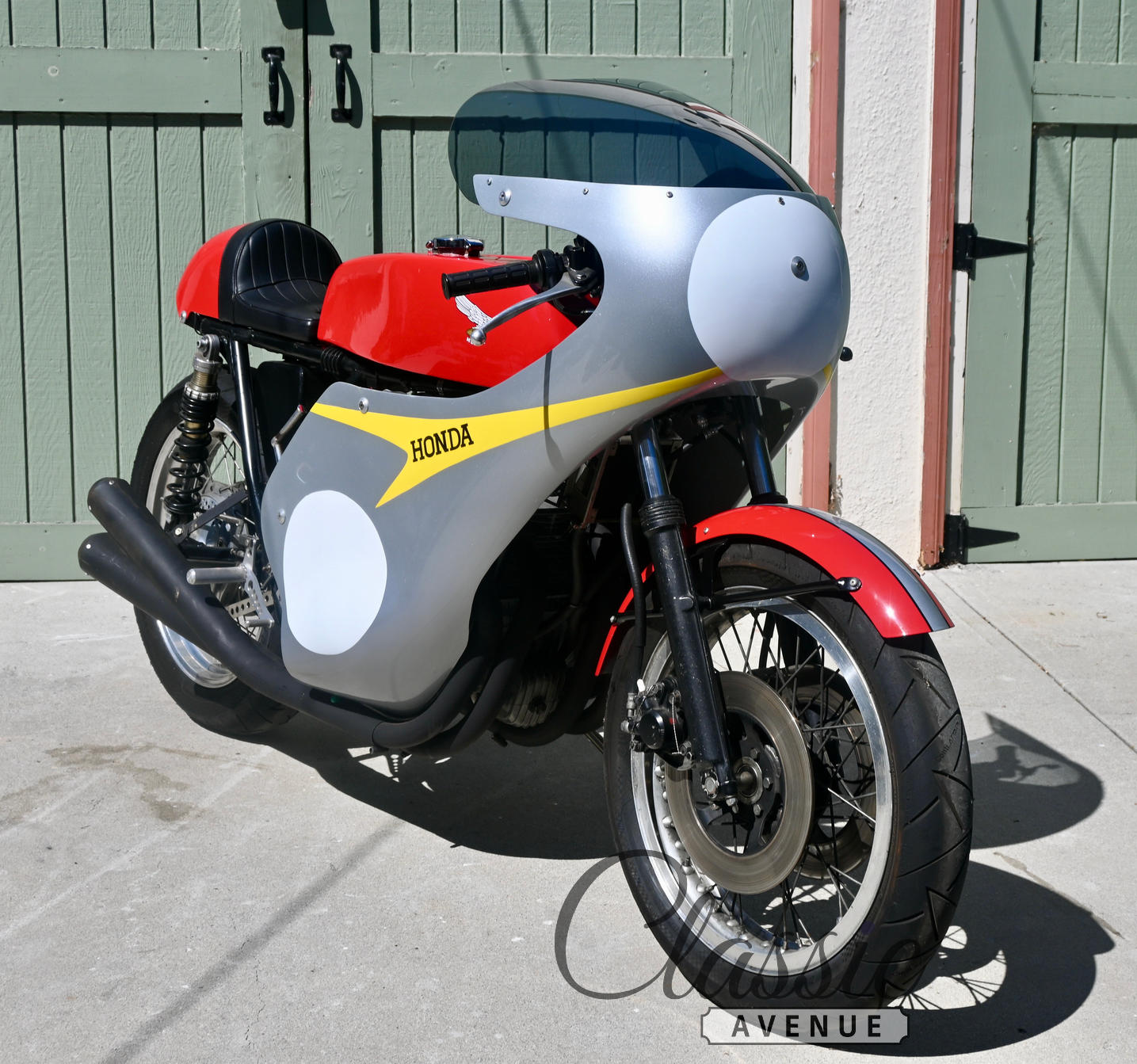 The Superbike frenzy of the late 1960s to early 1970s started when Honda introduced their 4-cylinder fire-breathing dragon, the CB750. British firms Triumph and BSA followed suit with 3-cylinder 750s, the Trident and Rocket 3, respectively, while Norton brought out the Commando 750, MV Agusta had the 750S, and eventually Kawasaki and Suzuki followed with their Z1 and GS models. And that frenzy has never stopped.

All these road-going Superbikes had to race, so Formula 750 was born to a waiting crowd and the racing was like nothing they’d seen before. The pinnacle of the racing calendar was the Daytona 200 and the 1970 event was a knockdown match between

BSA-Triumph and Honda, whose team of race-kitted 750s was managed by Chester, England-based Honda dealer Bill Smith. The team was Ralph Bryans, Tommy Robb and American Dick Mann. Although the British bikes were the favourites, they were up against multiple World Champion Mike Hailwood and previous Daytona winner Gary Nixon. Honda CB750 sales went stratospheric when he took the chequered flag aboard the Honda.

The racing CR750 was essentially a modified CB750 with a parts package available at the dealer, of which only 200 homologation kits were produced, transforming a street CB750 into a Daytona-winning spec machine for any privateer with the means.

The 1975 Honda CR750 ‘Dick Mann’ Tribute offered here has been owned by a SoCal enthusiast for about the last three years. The build started with a refurbished 1975 CB750F frame with a 1971 SOHC inline-four, increased in displacement to 761cc during rebuild in 2020. Modifications include Keihin CR carburetors, a CR-style fuel tank, Norris race camshaft, an alloy CR oil tank, heavy duty primary chains and cam chain, upgraded bearings and shaft, Dyna electronic ignition, a Lytron oil cooler, dual progressive adjustable Öhlins rear shocks, a Swarbrick four-into-four exhaust, and a CR-style seat unit and fairing mounts/hardware from Mead Speed in the UK. 18″ Akront front and Morad rear wheels wear Continental Road Attack CR 2 tires that measure 110/80 and 130/80 respectively. Steering is handled with clip-on handlebars and a steering damper, and front suspension consists of 1978 CB750 F2 forks w/new seals. Braking is from dual front discs with Nissin calipers, and a polished vented rear drum. Further modifications include performance clutch plates, heavy duty clutch springs, and a RK 530H heavy duty drive chain connecting the 13T primary drive sprocket to the 48T rear sprocket. The bike is kick-start or rear roller-start only, and the clutch action is firm but not oppressively so.

A 12,000-rpm tachometer and a Smiths oil pressure gauge sit in a custom panel. With no odometer, true mileage is unknown, though only a handful of miles have been added under present ownership.

Prior ownership leads us to Sweden, where the bike was occasionally raced in the vintage class at Anderstorpe raceway. It was then retired and imported to the US, where the CR parts quest began. The Vintage Swarbrick exhaust and stock oil filter cover w/Lytron cooler were sourced from a local collector, while an alloy oil cooler built by AHRMA CB750 racer Dennis Weinhold was installed. Billet aluminum foot controls made by AHRMA racer Jarrod Halloway. The engine was rebuilt using original Norris cam w/spec sheet dated 1978, all new gaskets and seals. 1.0mm over pistons/rings, bronze valve guides and lapped valves. Front forks are 1978 CB750 F2 w/new seals. Dyna ignition and coils and a total loss system is powered by a Lithium Ion battery w/charger.

Fresh Honda livery paint on fairing, tank and seat exude the heyday of the vintage era.

This CB750 is now offered with a clean California title listing it as a 1970 model.