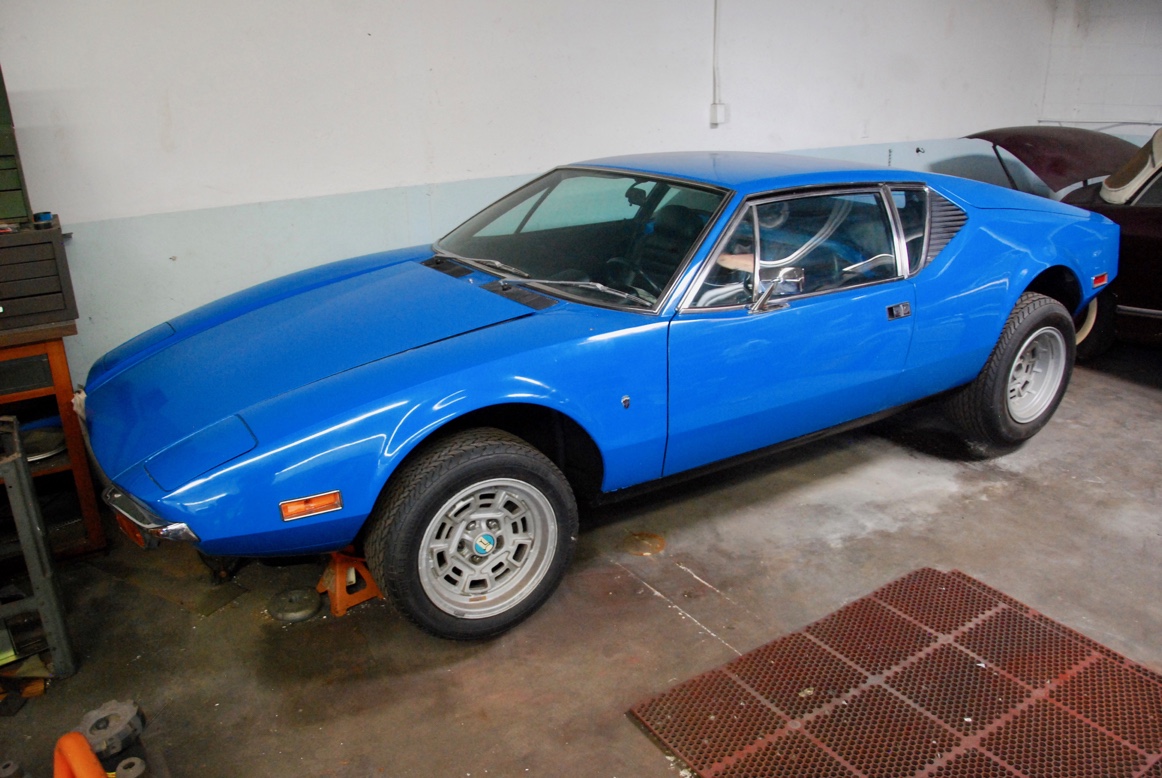 1972 De Tomaso Pantera. Having established himself as a serious automobile manufacturer with the Mangusta Coupe, Argentinian, Alejandro De Tomaso commissioned the Italian design firm Ghia’s American-born designer Tom Tjaarda, and Lamborghini designer Gianpaolo Dallara to produce the chassis for his new mid-engined supercar, the Pantera. Dallara opted for a monocoque construction for the steel chassis/body, abandoning the Mangusta’s backbone frame. The car debuted in Modena in March 1970 and was presented at the 1970 New York Motor Show a few weeks later. Approximately a year later the first production cars were sold.

Ford Motor Company was De Tomaso’s partner at the time of the Pantera’s introduction in 1971 and thus the Pantera, like the Mangusta, relied on Ford power, the 351ci Cleveland V8 with 330bhp. Mated to a ZF all-synchro, five-speed transaxle, the Pantera could complete a 0-60mph dash in a little over five seconds, as per Car And Driver and touch 160mph flat out. The stunning coupé body was in fact built by Vignale, both companies being part of De Tomaso’s empire in the early 1970s. De Tomaso’s longstanding relationship with the Ford Motor Company led to an arrangement whereby the Pantera was distributed through select Lincoln-Mercury dealerships in the US, where a lower compression, 248bhp Cleveland motor (meeting stricter emissions regulations) was introduced for 1972, though with the more aggressive “Cobra Jet” camshaft to reclaim some of the power back.

Reflecting its makers’ transatlantic ambitions, the Pantera came with an abundance of standard features which appeared exotic in Europe, such as electric windows and air conditioning.

The “Lusso” (luxury) Pantera L was introduced in August 1972 as a 1972½ model. For the US market, it featured a large black single front bumper that incorporated a built-in airfoil to reduce front end lift at high speeds, rather than the separate bumperettes still used abroad.

The car offered here, a highly desirable Pre-L, chrome bumper example, was purchased new from Bob Estes dealership in Inglewood, California, for $10,600 by our vendor, a Southern California enthusiast with a small car collection. An avid hotrodder and tinkerer, professional engineer, Larry Lary, ran numerous machine and engineering shops in the Los Angeles area, specializing in precision engineering for the aeronautical and astronautical industry. Parts he made still orbit the planet! The car was deemed to be less than powerful “enough”, so he embarked on an engine swap project, opting for more more more, with a Holman & Moody-acquired NASCAR cam, and if that wasn’t enough, evidence in accompanying paperwork leads us to believe that turbocharging was on the design board.  Unfortunately, he passed away before work could be completed. The car is now offered in complete condition with the original engine out of the car but included in the sale. In the car is a V8 with carb set to one side, also included in the sale.

This 1972 De Tomaso Pantera has been in dry storage since 1984, on axle stands and covered to protect the original Grabber Blue (or close to it) paint. The black interior is in excellent condition, showing a nice patina conducive with the age of the car. The car is sold on a clean, clear original California pink-slip title, and is accompanied by an original owner’s manual, both original blue California license plates (the perfect condition front one has never been on the car), receipts, registrations back to day one, original tool roll, an abundance of owners club magazines, miscellaneous parts, etc.

Please contact info@ClassicAvenue.com  or  (424) 265.0645 for further information and pricing.