The Commando’s vibration-beating Isolastic frame enabled Norton Villiers to successfully prolong the life of their hugely successful parallel twin. The futuristic, boldly styled 750 Commando Fastback was announced at that Earls Court London Show in 1967, the Commando used the preceding Featherbed-framed Atlas model’s 745cc engine and AMC gearbox, and was an instant hit with the motorcycling public, being voted Motor Cycle News ‘Machine of the Year’ for five consecutive years. It might have been a little down on top speed compared to rivals such as BSA-Triumph’s 750cc triples and Honda’s CB750 four, but the Commando more than made up for this minor deficiency with superior mid-range torque and steadier handling.

Norton’s free-spinning 750 engine acted as a magnet for UK performance specialists, amongst whom Vince Davey of the Gus Kuhn shop and Paul Dunstall – both in South London – were the most highly regarded. Paul Dunstall raced big Nortons from 1957 to 1959 before turning to the preparation of race bikes for others. He was soon offering a huge variety of performance upgrade equipment in what had become a rapidly expanding aftermarket. By 1966 he was building complete machines for both road and track for the princely sum of $1,400.

The 1967 Dunstall Dominator 750 was advertised as “the fastest road machine ever tested in Britain” and quoted a maximum speed of 131 mph, which attracted such customers as Steve McQueen. Meanwhile the racers were campaigned with considerable success including Ray Pickrell’s win in the 1968 Production TT.

As Motorcycle News put it in January of 1969:

With a genuine top speed of 130mph, a twin hydraulic front brake and true, functional good looks, the Paul Dunstall Commando has everything. Dunstall, the customizing king has transformed an unusually good motorcycle into the most exotic road machine available over the counter”.

Apart from the frame Dunstall redesigned just about every component, wringing out 66bhp, 11 more than the standard machine with no loss of tractability. To achieve this, porting was hand-finished and polished to improve breathing, with upgraded valves, springs and guides. Spun cast pistons raise the standard 8.9:1 compression ratio to 10:1. A redesigned “street” camshaft complete the internal attention, while updated carbs, adjustment to gearing, and Dunstall’s wonderfully resonant exhaust helped to get the Dunstall Commando Cycle World magazine’s first ever sub-12 second ¼ mile time, at 107.88mph.

The beautifully presented 1971 Dunstall Norton 750 on offer here hails from a small, multi-Norton collection in Southern California. An enthusiast of the marque, the Dunstall bike was researched meticulously before purchase and is accompanied by a letter of authenticity by the previous owner from the Norton Despatch Records, showing #143230 was sold to Paul Dunstall of Well Hall Rd., Eltham in South London on the 17thof February 1971. A large file of service records and parts receipts also accompanies the bike from its ground-up restoration, using a great deal of NOS parts.

The bike is offered is truly excellent running condition. The engine is smooth and powerful, pulling considerably better than a standard Commando. It shifts well and handles superbly. And it’s fast.

Originally blue when delivered, the very dark green livery it has now, is exquisite and appropriate. The steel tank is free of scuffs or dings and all panels are of similar, near perfect condition. The engine and all cycle parts are all perfectly restored. Showing 12,584 miles on the odometer, it is believed that is the original mileage on the bike from new.

Rare, desirable and perfectly restored, this genuine ’71 Dunstall Commando ticks all the boxes. Few are as handsome and performance oriented as this one. 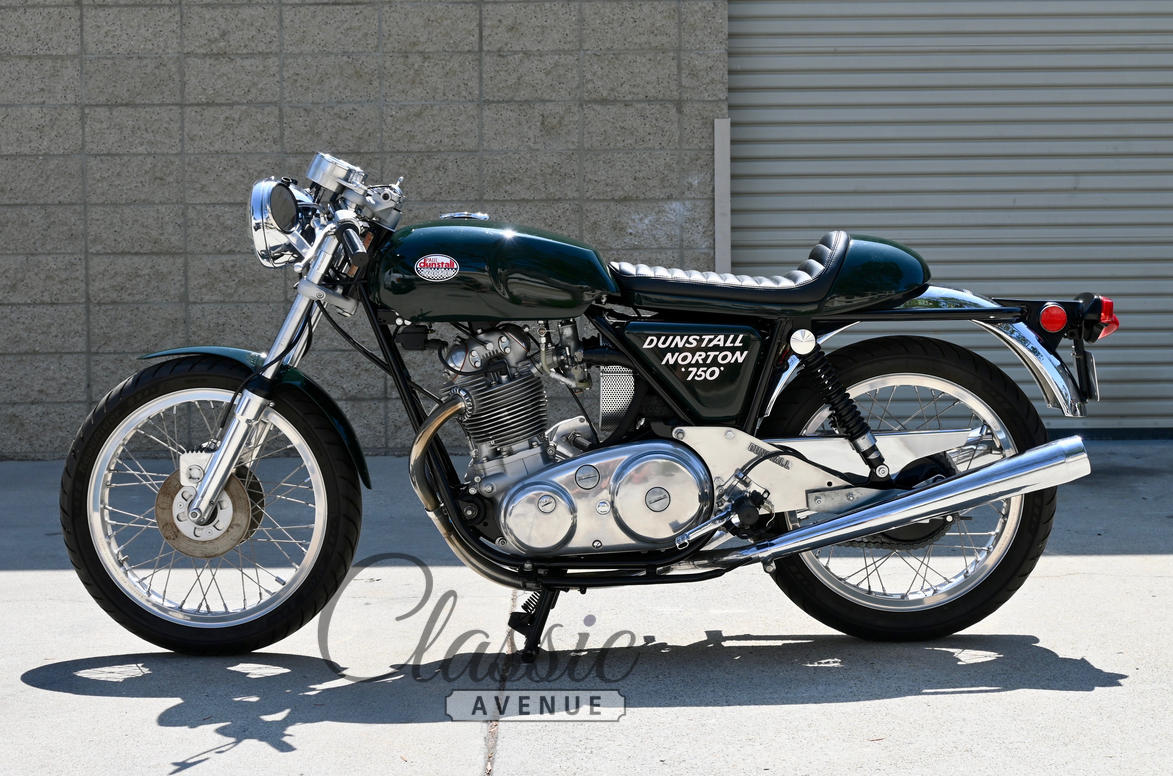 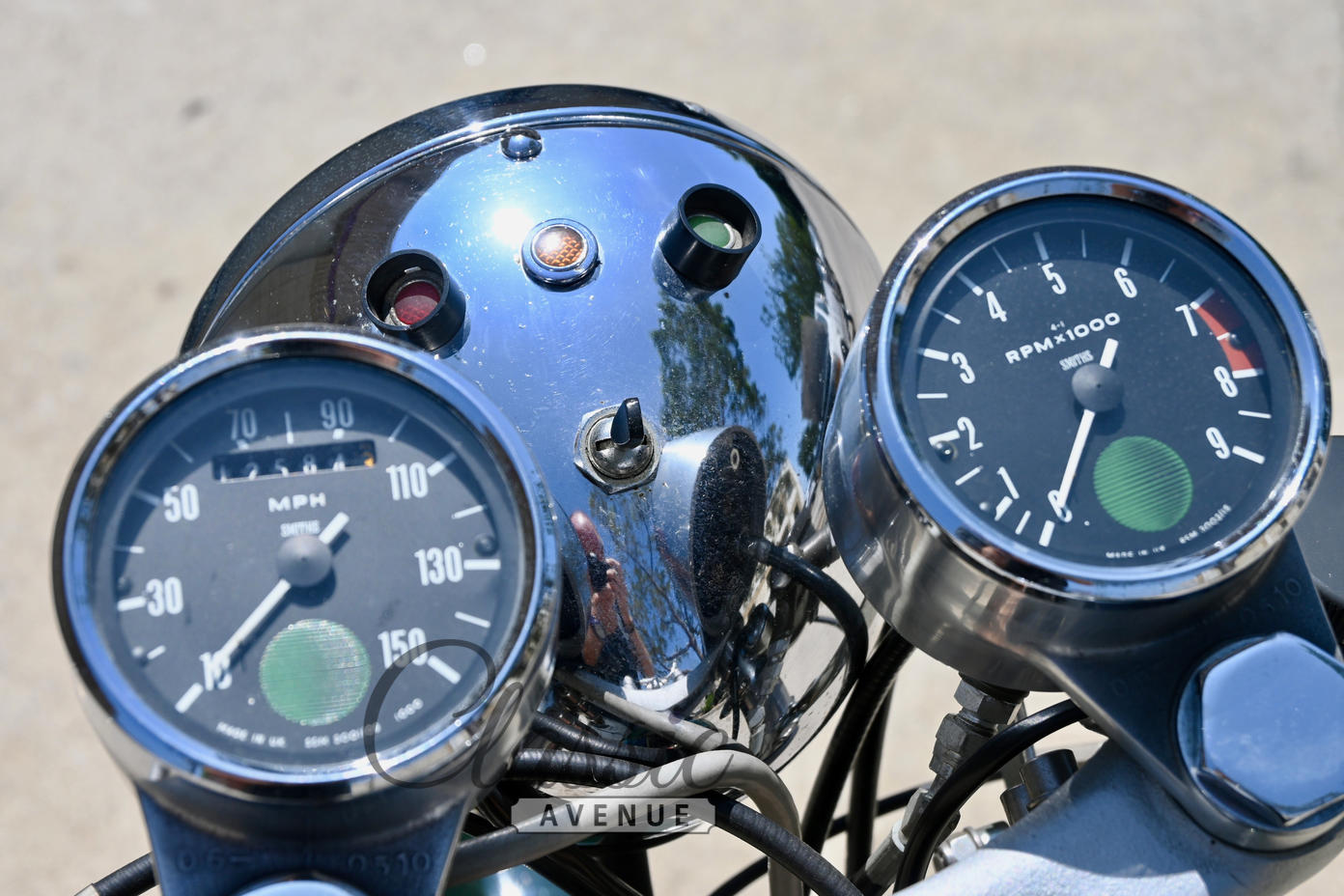 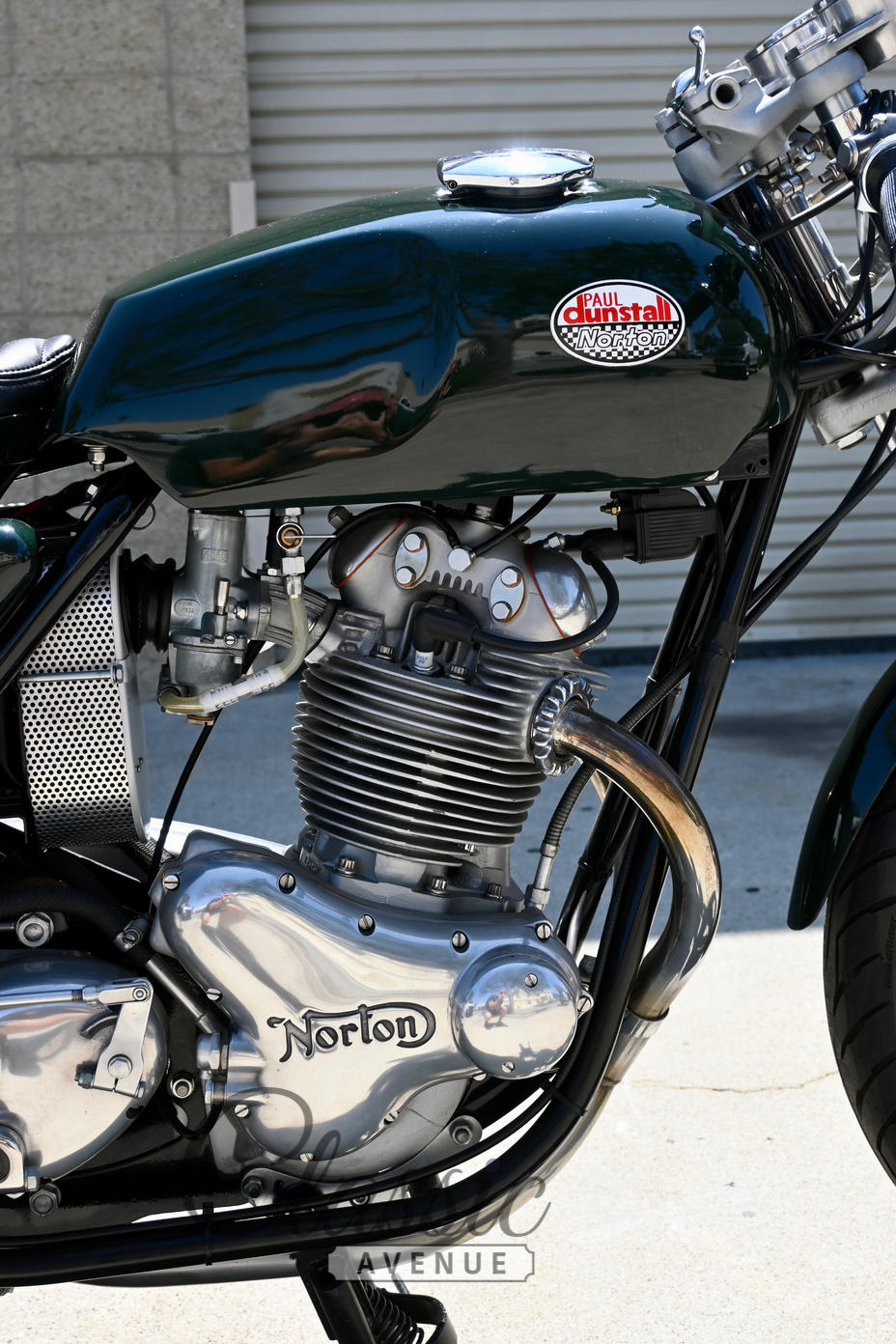 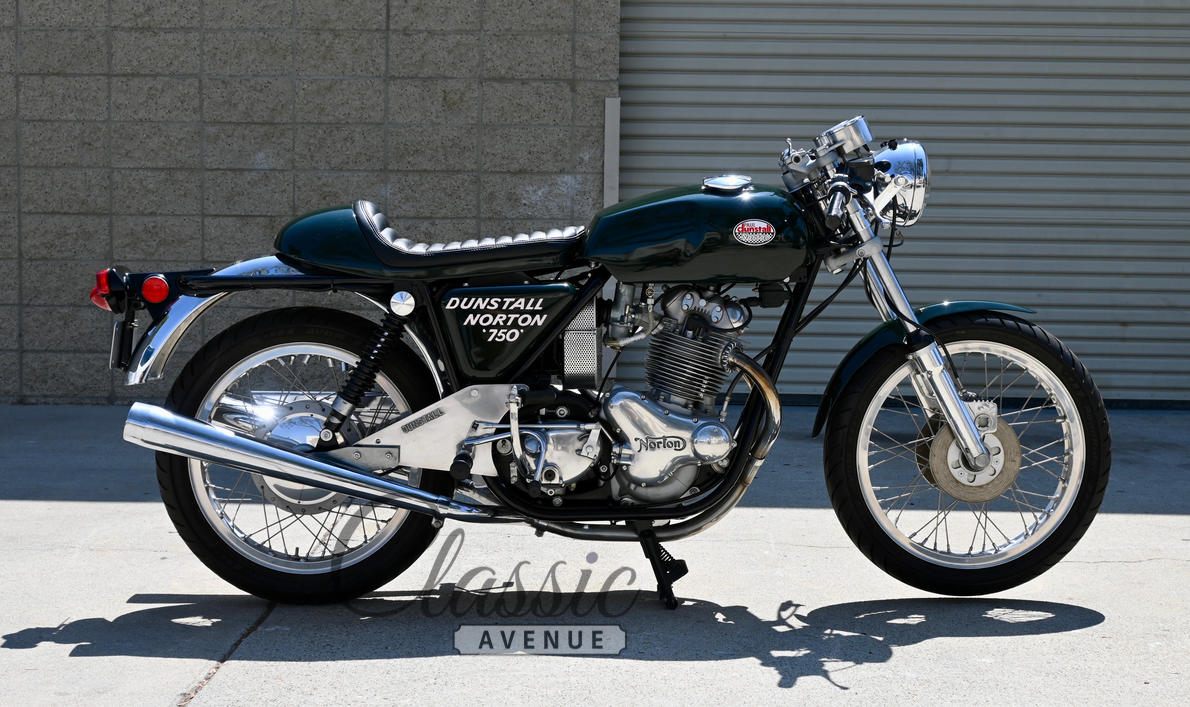 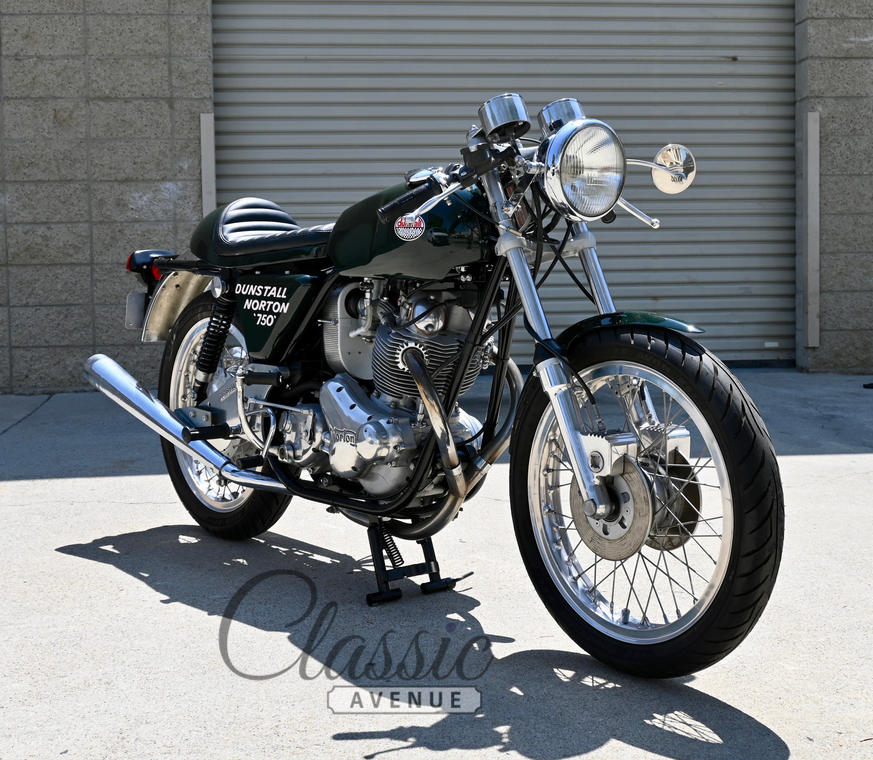 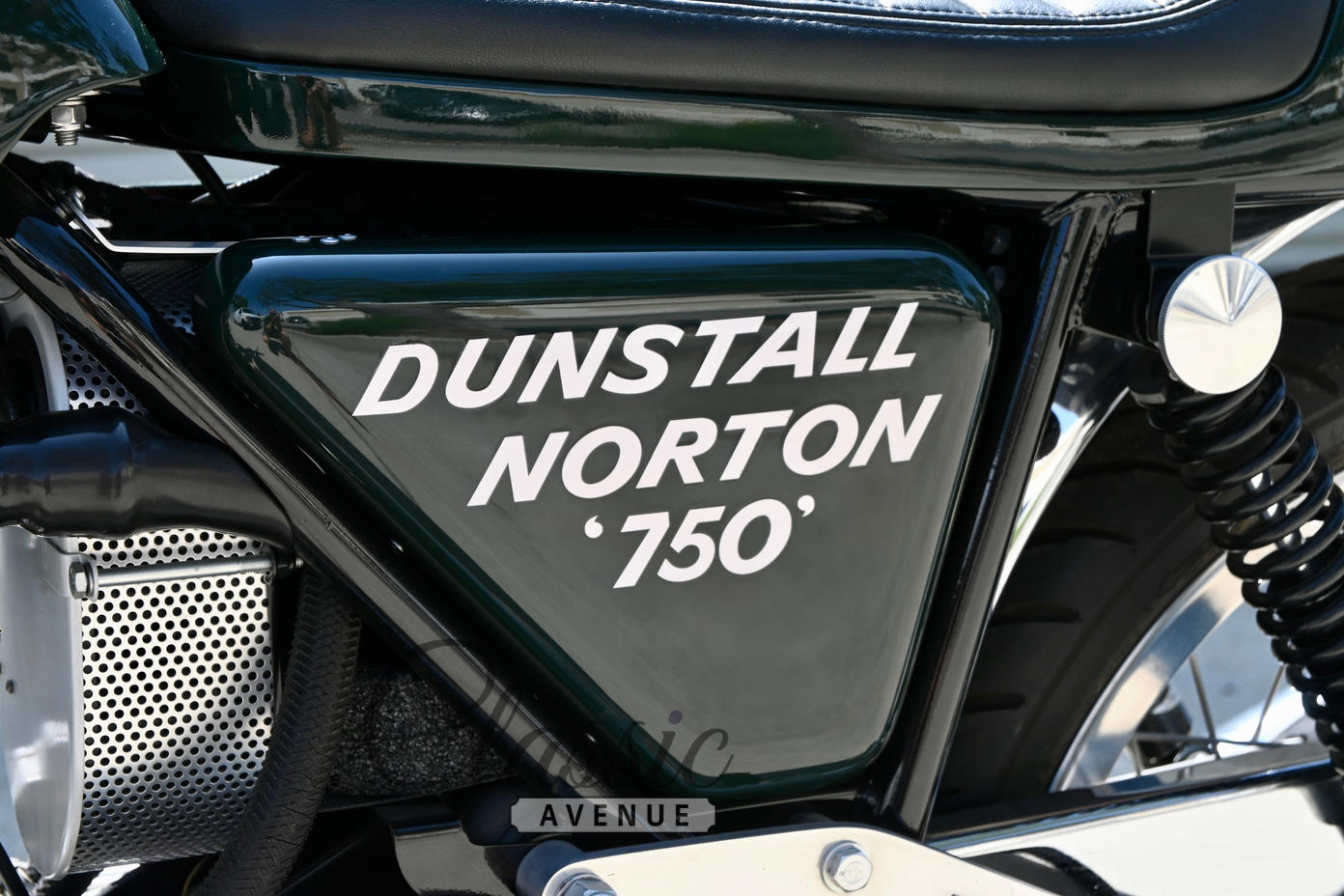 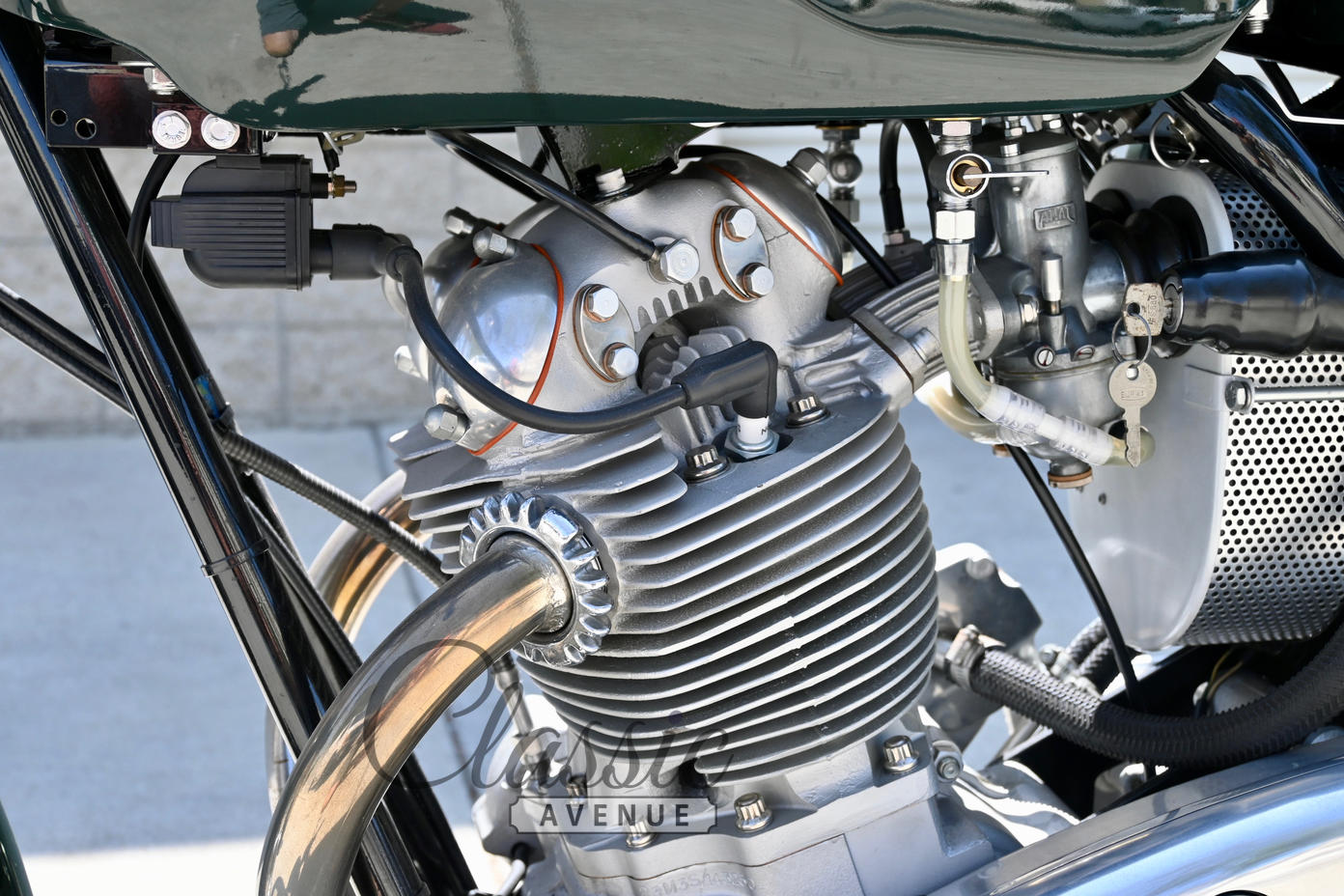