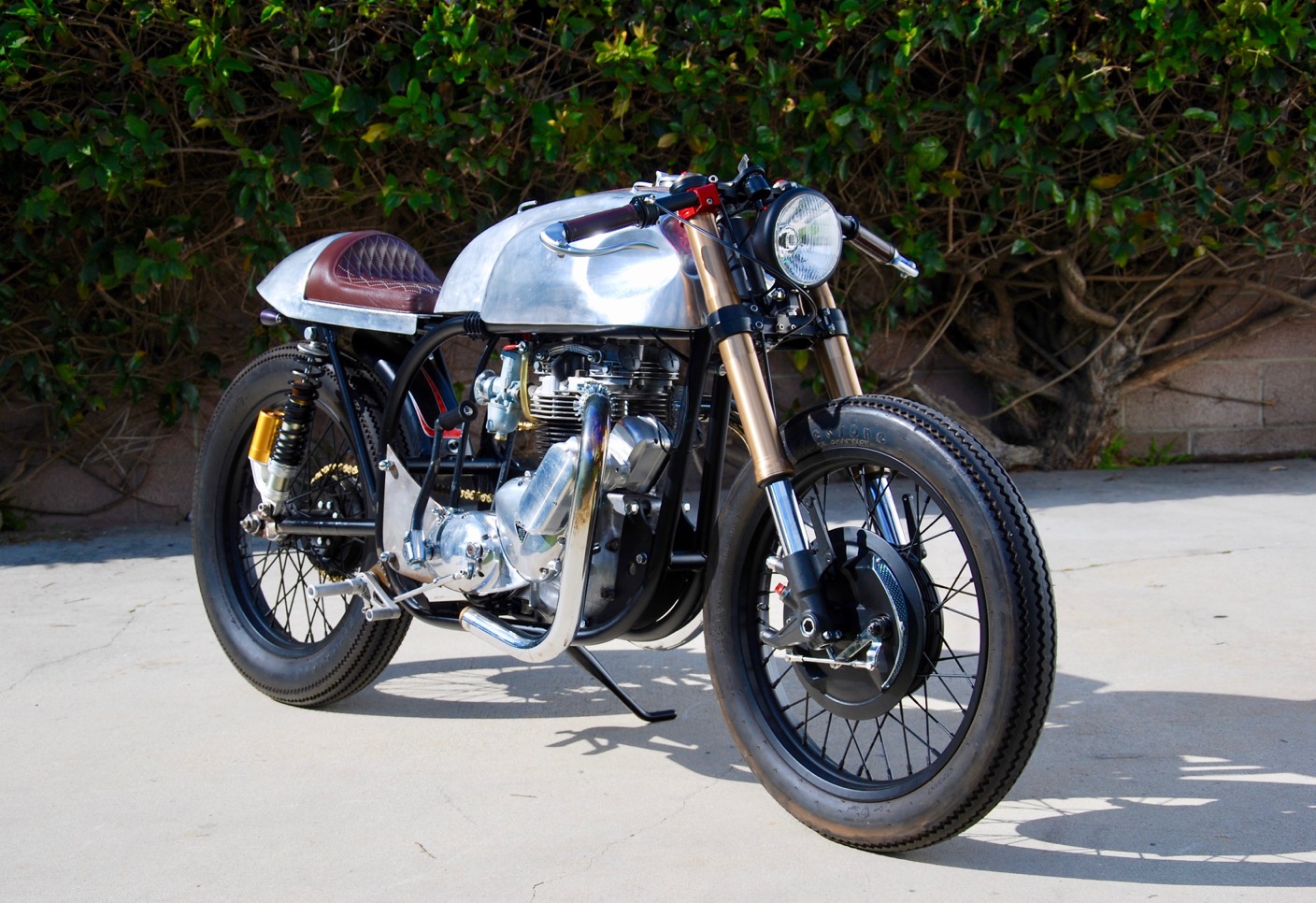 With indelible images of London’s Ace Café, the Triton is a perfect marriage of Triumph power and Norton roadholding, and is rightly regarded by enthusiasts as the quintessential British sports special. This high-performance hybrid first emerged in the 1950s and countless versions have been built by professionals and amateurs alike. Today the Triton enjoys well-deserved marque status.

With indelible images of London’s Ace Café, the Triton is a perfect marriage of Triumph power and Norton roadholding, and is rightly regarded by enthusiasts as the quintessential British sports special. This high-performance hybrid first emerged in the 1950s and countless versions have been built by professionals and amateurs alike. Today the Triton enjoys well-deserved marque status.

The Triton emerged in post-war London with thrill-seeking youths gambling on races from one roadside café to another on the A406 North Circular road. With an increasing desire for reliable and versatile power, the Triumph engine was the obvious choice and to marry it with the best handling machine of the day, Norton’s Isle of Man-winning Featherbed frame gave this original crotch-rocket the ultimate performance of the day. There is no coincidence that the retraction of the two names Triumph and Norton coincidentally is the name of the Greek God of the sea, Triton, son of Poseidon.

And here is a beautiful example.  Built and developed over the last couple of years by the previous engineer owners, the heart of the bike is a classic 1969 Triumph TR6C vertical twin engine. The standard 650 cut its teeth in the International Six Days Trial successes in the late 1940s prompted Triumph to develop their range of the 500cc TR5 and then for the 650cc TR6, introduced for 1956. To the fully rebuilt engine a twin carb head was installed with brand new Amal carburetors and the whole package was upgraded with 750cc top end kit. When overhauled, the gearbox was inspected and refurbished as needed with a new clutch. An ARD-style magneto was also installed, which certainly looks the part and works magnificently.

This smooth and powerful engine package was installed in a 1959 Norton Wideline Featherbed frame. Checked for metal fatigue, cracks, etc. the frame was treated to the standard black powder-coating. The swing arm at standard length gave the bike a twitchy feel, so was extended by a couple of inches. At either end are matt black wheels shod with period looking Firestone tires. The wheels hang in exquisite suspension setup: in the front is a pair of upside-down forks liberated from a Triumph 675 Daytona, while Öhlins shocks keep the back end firmly planted. This suspension package gives the bike a distinctly modern handling feel in a classic bike. Brakes are fully rebuilt and work as they should.

A Manx Norton-style gas tank with integrated oil tank gives a very unique look and allowing the general appearance of the bike a sense of simple airiness. The tank strap is accented by a leather strip, matching the diamond-stitched seat. Gorgeous rearsets and foot controls are complimented by a Bates-style headlight and discreet bullet brake lights to complete the lighting package, while pre-WW1 style reversed controls on the clip-ons work well and finish the look perfectly.

With a limited electrical system, the bike’s reliability is fully enhanced, starting easily and idling smoothly. The bike has strong power from a taut engine, shifts smoothly and handles well.

quality. And few bikes exude the essence of motorcycling like the Triton.

Seen here is a prime example from the heyday of 1950’s café bike culture with a modern twist. In exemplary condition, it’s ready to rediscover the days of the Mods and the Rockers.