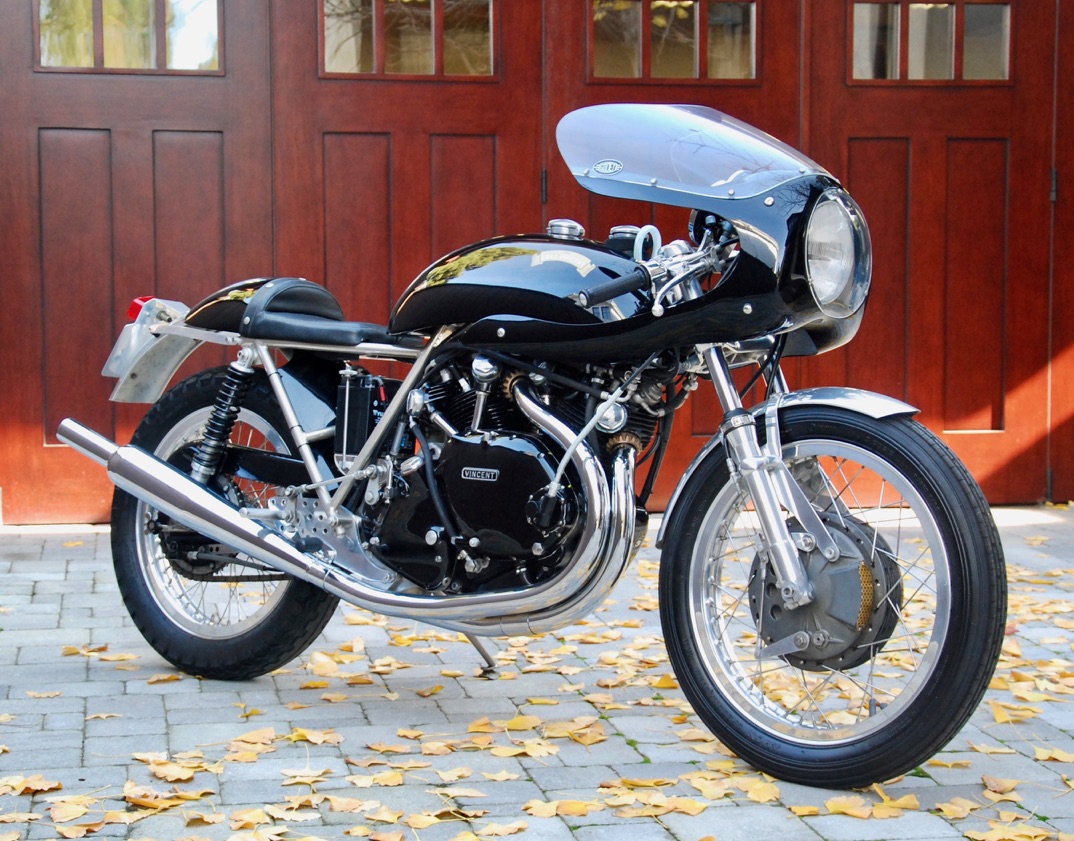 A great deal of confidence must be shown by anyone who can take the extensively-tested from a highly-financed R&D department from a huge international corporation and say, “I think we can do that better”. And so is the mystique of the specialist frame builder. Rickman, Seeley, Harris, Spondon from the UK, Moto Martin from France and then Swiss Fritz Egli. Egli set out to tame the wayward handling by modern standards Vincent 1000cc twin. His welded backbone would accept all kinds of engines from British 1950s singles to multi-cylinder Japanese machines. However, the Egli chassis is synonymous with Stevenage’s V-Twin.

Once developed, Egli moved to other projects, but granted license to only one other builder, deemed to build with comparable quality, Frenchman Patrick Godet. At his small factory in Malaunay, just outside Rouen in Normandy, Godet built over 250 of his beautiful Vincent specials, and repaired/restored countless original Vincents and engines for owners around the world, with incredibly high standards. An ex-racer, he bought his first Vincent in 1974, and after some modifications and development work, taking the Black Shadow to Lightning spec, he turned to Egli to truly realize the potential of the great Vincent engine. The Godet-Egli-Vincents were built in a new and surgical-theater clean factory by a team of six by 2006, and the waiting list for new machines was very long indeed.

The bike offered here was part of the very discerning collection of Mars Webster. Mars commissioned the bike from Patrick Godet in September of 2001 to 998cc Black Shadow specification. New crankcases were provided by Andy Molnar and housed all new internals and a 4-speed gearbox with a dry multi-plate clutch. Amal concentric 30mm carbs mix fuel and air, while a Godet-designed exhaust expel gases. Mars updated a few things during his ownership, including an upgrade to the starter motor.

This brand-new engine was mounted in Godet’s TIG welded 100mm Reynolds 531 spine frame. 35mm Ceriani GP forks up front with Fontana magnesium front brake hold a 19” front wheel laced with stainless spokes. At the rear a polished swingarm attached Maxton shocks to the frame and hold an 18” wheel with a Black Lightning-style brake. Aluminium fenders, fiberglass single seat unit and fairing with an aluminium gas tank complete the package. The tank was originally ordered in British Racing Green but was repainted black at some point. Aluminum control levers are by Amal and the instruments by Smiths, the latter comprising a 5” Chronometric speedometer and 3” tachometer.

The impressive specification and high standards of build quality certainly cures all the foibles of the original 1940s design.

Mars enjoyed the bike immensely. As one of the prized jewels of his collection, the accompanying file tells the story of trips to France to view the bike, Godet’s trips to Southern California to visit the bike in its home and evidence of many shows, including The Legend of the Motorcycle event and the Del Mar Concours. Written up in several magazines, the bike was also a feature of an Yves San Laurant television ad – see photos below.

Now with a thoroughly enjoyed 5,105 miles on the odometer, the bike presents perfectly – testament to the care with which the bike was ridden, stored and maintained.

This marks a wonderful opportunity to acquire the perfect culmination of classic motorcycling in a fast, modern café racer package, exuding an abundance of style.