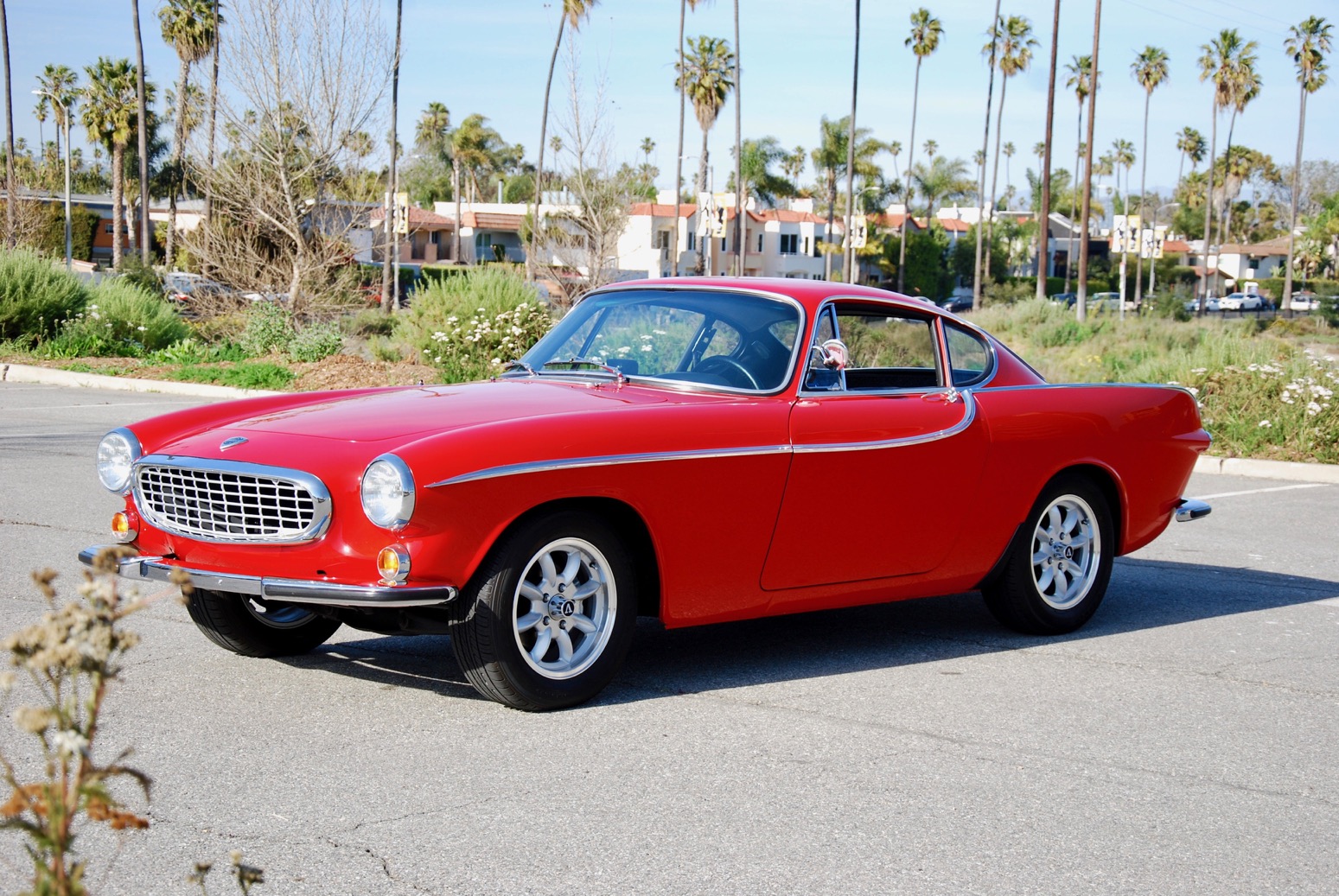 Plagiarized , hacked and edited from Andy Reid at ClassicCars.com:

Volvo’s image is hard to shake: that of durable, boxy sedans and station wagons. But in the 1960s, Volvo took on the sportscar might Italy and England with the P1800 series.

The P1800 was not Volvo’s first foray in to the sportscar market. That dubious honor was given to the P1900, at best an awkward-looking car with a fiberglass body built in the U.S. by Glasspar. The final nail in that car’s coffin was hammered the first time Gunnar Engellau, Volvo’s then-new CEO, took it for a weekend trip and found the car so terrible that he immediately canceled the project. However, he still wanted a sportcar so employed Helmer Petterson, a contractor for the brand, to lead the project. As a contractor he was granted greater flexibility in developing the car, which proved to be critical in the launch of the P1800.

Engellau’s took the project to Italian design house, Pietro Frua, but the boat-designing son of Volvo’s Helmer Petterson had a different idea for the design work. When both designs were submitted, the Pelle Petterson was chosen. Much to the annoyance of management.

Building the car was also full of fits and starts until a deal was struck with England’s Jensen, using panels sourced from Pressed Steel LTD of Scotland. The P1800 was finally underway.

Marketed as a “souped-down Ferrari”, the car was constantly compared to other more established sportscar brands. Styling elements such as the rear fins, egg-crate grille and lines of the roof and fenders strongly recall cars like the Ferrari 410 Superamerica, Lamborghini 350GT and an Aston Martin DB4-esque nose—not bad styling influences at all. As a slower machine than these comparables, Volvo would lean on their reliability with ads like “Does your mechanic have more fun with your sports car than you do?”, which was printed below an image of a mechanic smiling under the hood of a Ferrari.

The press fell for the P1800 from the beginning. The $3,995 price tag for all that style was hard to beat, and the car became a hit.

With greater manufacturing capacity, production moved to Sweden in 1964 to Volvo’s new assembly line, and the name changed to P1800S – ‘S’ for Sweden – and production carried on until 1973.

No self-respecting P1800 piece would be complete without one of the greatest automotive product placements we have seen, along with 3 Mini Coopers and a DB5. Pre-007 Roger Moore was the star of the TV show, The Saint, playing Simon Templar and driving a white P1800. And personally, Moore owned three P1800s, commenting, “They were delightful cars and an absolute joy to drive.”

The P1800 is possibly one of the best classic sports cars to consider if you’re looking for a daily driver. Reasonably fast in today’s traffic, comfortable, spacious and as reliable as a Volvo can be. Irvin Gordon’s red Volvo had famously covered about 3 million miles, until his recent passing – you can track his progress online at vcoa.org/irv-o-meter. Perfectly suited for relaxed touring plus as much as 30 miles per gallon, and comfortable ergonomics to match, make the car a very desirable proposition. The body is very stiff, but the suspension is on the soft side, making for a car that is very forgiving and difficult to land in trouble. Remember, the folks at Volvo like things safe.

Interior styling is as impressive on the early cars as the exterior with a dash and instrumentation with a bit of that 1950s American sci-fi styling.

At the end of the day, this car is a Volvo. It’s as durable, practical and tractable as every other car the company has made. The P1800 just happens to be drenched in a beautiful, head-turning design.

The 4-owners from new (the first three were Puget Sound Chapter of Volvo Sports America Club Members) car on offer here was subject to a comprehensive mechanical and cosmetic restoration, completed in 2015, by a meticulous previous owner.

Elhot Metal Fabrication used the best materials to prepare the body for a bare-metal repaint in PPG’s Hot Rod Red (1701). The engine was upgraded to the later B20 2-liter, mated to a 4-speed with electronic “J” overdrive (activated by a stalk on the steering column) and 4:56 geared axle. The engine was rebuilt using a performance head with larger valves and a sportier camshaft and new timing gear. The engine sits on all new engine mounts and is cooled with a new radiator and upgraded fan, while gas is delivered by a new fuel pump to be mixed with air through a pair of SU carbs rebuilt by Z-Therapy of Portland. Underneath, there’s a new exhaust system. An alternator replaces the original generator, and all other electrical systems were rebuilt and/or upgraded, with a new battery. The gearbox was overhauled with new clutch and slave cylinder, and new seals. Attention was given then, to the brakes, with new calipers up front, stainless steel brake lines and new bearings. The car sits well on 1” lower springs and replica Minilites, while a heavy-duty sway bar at either end of the car, new bushings and Bilstein shocks give it a far sportier drive. All rubber parts were replaced, and a new windshield was installed.

A German square weave carpet was installed in the car and original seats were recovered in vinyl. Original spec leather seat covers can be purchased from P1800.com for $850.

The car comes with a file of receipts and copious notes, including the results of a compression test (170, 170, 175, 170), notes on materials used in restoration, maintenance notes, and an extensive array of concours trophies.

The car is a fantastic drive. Sprightly and responsive – far more than a standard 1800 – the car accelerates and cruises at modern car rates. The suspension feels taut, but not at all overly stiff and tiring for longer jouneys – think GT cruiser rather than canyon racer. Everything works on the car and it presents superbly. This is a fantastic example of quintessential 1960s style with a modern feel, just where you need it.