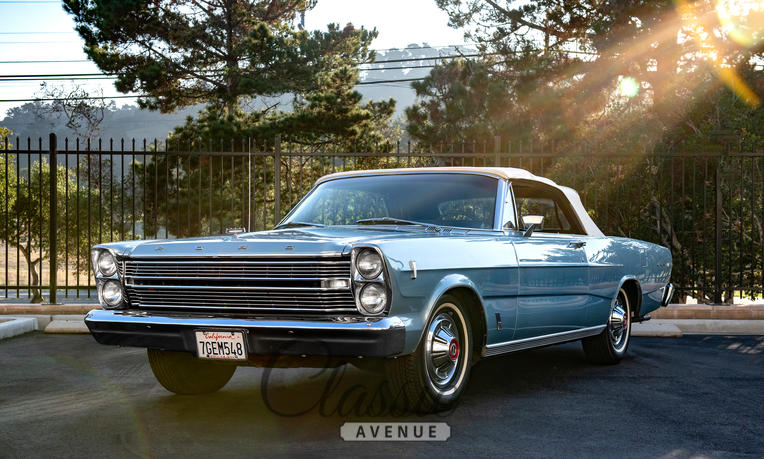 Ford was in full-swing by the mid-1960s. The all-new Mustang production line was trying desperately to keep up with orders, while a totally new full-sized was on the way. The new Galaxie was an all-new square design with stylish stacking headlights mounted on a new “Torque Box Frame” that allowed for a stable body mount and reduction in body-flex and noise. It was available in various iterations of coupe and convertible with a plethora of engine options.

In motorcycle Grand Prix racing, Wayne Rainey needs little introduction. During the late 1980s and early 1990s, he won the 500cc World Championship three times and the Daytona 200 once. He was characterized by his smooth, calculating riding style, and kept the fans riveted by his intense rivalry with compatriot Kevin Schwantz.

In 1984, he accepted an offer to ride for the newly formed Kenny Roberts Yamaha racing team in the 250cc class of the Grand Prix World Championship. A less than successful season (1 podium and difficulty push-starting the bike) saw him returning home in 1985 to join the Maclean Racing team in U.S. 250 and Formula 1 classes, and then on to the American Honda team from 1986 to 1987 where he raced Superbike and F1. It was during the 1987 Superbike National Championship that his intense rivalry began with Kevin Schwantz as the two battled it out for the title. Rainey won the Championship, but the fierce rivalry between the two competitors was just beginning. So intense was their rivalry that they continued their battle during the 1987 Transatlantic Trophy match races in which they were supposedly teammates competing against a team of British riders.

In 1988 Rainey returned to Europe, again joining Team Roberts Yamaha, this time in the premier 500cc division riding the YZR500. His arch-rival Schwantz followed him to Europe, signing to race the 500cc class for Team Suzuki. The two would continue their rivalry on racetracks all across Europe, driving each other to higher levels of competitiveness. In 1988, Rainey won his first world championship race at the British Grand Prix. Also in 1988, he and his Team Roberts Yamaha teammate Kevin Magee won the prestigious Suzuka 8 Hours endurance race in Japan.  In the 1989 campaign, Rainey finished second overall behind Eddie Lawson, winning three races and placing on the podium in every race that he finished.

From 1990 to 1992, Rainey hit his stride earning three consecutive 500cc crowns for Yamaha.[2] Rainey was involved in a hard-fought campaign with Kevin Schwantz while seeking his fourth-consecutive title in 1993. He was leading the championship points by a margin of 11 points over Schwantz and leading the GP when he suffered his career-ending crash at the Italian Grand Prix in Misano. He slid into the gravel trap at high speed, breaking his spine against the raked surface designed as a safety feature for car racing. The injury handed the title to his great rival Kevin Schwantz. Rainey’s injuries rendered him permanently paralyzed from the chest down.

After turning to Williams team owner and quadriplegic Frank Williams for advice, Rainey later became the team manager for Marlboro Yamaha for a few years and raced modified karts. With home in the vicinity of the WeatherTech Raceway Laguna Seca, a corner was named in his honor. Following the famous Corkscrew, racers contemplate the left-hander, Rainey Curve.  Rainey was inducted into the AMA Motorcycle Hall of Fame in 1999 and he was named a Grand Prix “Legend” in 2000 by the FIM and was inducted into the International Motorsports Hall of Fame in 2007. In 2003, he was one of the subjects of the motorcycle racing documentary film, “Faster”.

This astonishing 1966 Ford Galaxie 500 convertible was produced at Ford’s Chicago, Illinois factory and passed through several owners, including a Bodie Smith of Spokane, Washington in the 1970s to mid 1980s, until purchased by Rainey in 2014. The car is finished in Silver Blue, repainted by its previous owner, over blue vinyl and at its heart is an X-code 352ci 4-valve V8 paired with a three-speed Cruise-O-Matic automatic transmission. Features include a power-operated convertible top, replaced in 1987, a Ford AM radio, and an aftermarket 8-track player. Upon acquisition in 2014 Rainey set about updating its stopping power with the installation of power-assisted front disc brakes.

The steel wheels are mounted with full covers and fresh rubber, post-photoshoot. The interior features a split bench seat trimmed in blue vinyl upholstery and accented with dark blue trim and color-coordinated carpets. The odometer shows just 12,700 miles. This is documented as accurate and original! Approximately 1,200 of those miles have been driven under Rainey’s ownership.

The X-code 352ci V8 is equipped with a four-barrel carburetor and was rated at 250 horsepower when new. Power is sent rearward through a three-speed Cruise-O-Matic automatic transmission.

With such little use  over the last 56 years and less so over the last 8 years, Rainey concedes that the time has come for this freshly serviced car to find a new home. It is accompanied by its original build sheet, handwritten notes, historical registration documents, and a clean California title in Wayne’s name. Plus a personalized autographed photo of Wayne with the car.