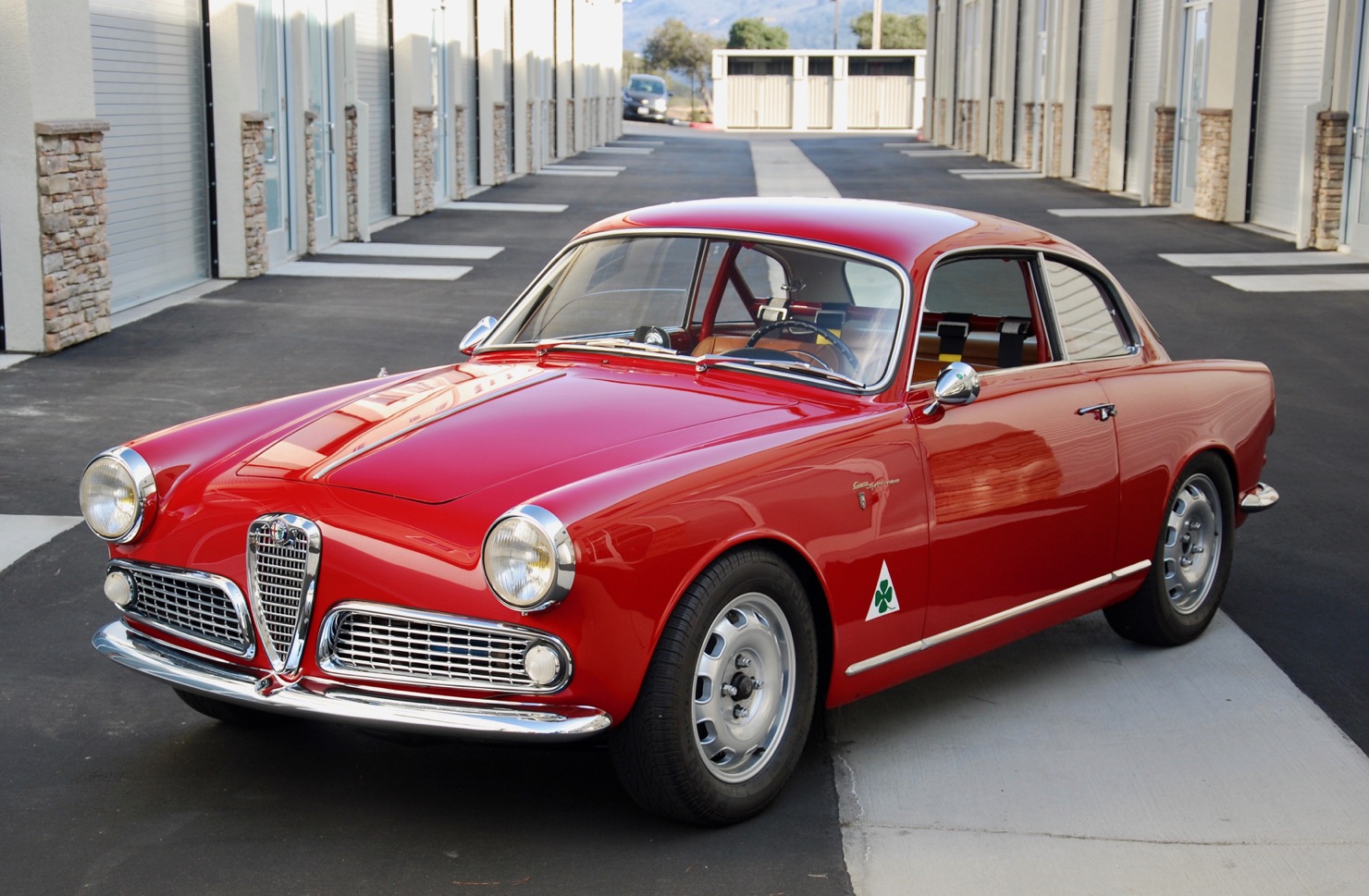 Production at Alfa Romeo was kickstarted after World War II with a couple of new models, the 1900 of 1950 followed by the Giulietta in 1954. The Giulietta Sprint coupe, penned by Bertone’s Orazio Satta Puliga, helped establish Alfa Romeo as a manufacturing force in the small car with big performance market. The unibody was powered by a light alloy, twin cam four of 1,290 cc, it was capable of 102 mph in basic form, and 110mph in the more powerful Sprint Veloce iteration, introduced in 1956.

The Giulietta’s arrival caused a sensation; demand outstripping supply at first. The original ‘750’ Sprint Coupé was soon joined by Berlina sedan and Spider convertible versions, and then in 1957 by the first of the new 101-Series cars. A revvy engine, fine-handling, responsive chassis and excellent brakes make the Giulietta Sprint a driver’s car par excellence and explains why these stylish Alfas continue to attract the discerning enthusiast.

The outstanding example on offer here has quite an extensive history, although little is known about the first owner, but he was custodian from 1958 until 1969, during which time the original engine was replaced by a Veloce motor. The car was then purchased by Don Jeffries of Salt Lake City, Utah, the mechanical condition being unknown, but the car was stored and not driven until sale in 1978 to Dr. Dave Strus, Ph.D, of Kokomo, Indiana. Dr. Strus embarked on a full restoration of the car during his ownership until 1988 in Illinois. In accompanying letters, the car was deemed to be in excellent, rust-free condition and a prime candidate for restoration. A full mechanical rebuild was performed with upgrades to the engine, including twin Weber carburetors. The original blue color was changed to Alfa Romeo red, the color it remains in today. The blue/white interior was changed to the saddle tan you see here.

The car was then sold to a “Scott”, from accompanying documentation, and then to Hil Raab of Crown Point, Indiana, and then to Ray Muleck, before heading west to Brian Mertz of San Clemente, California. Mr. Mertz employed the services of Cavallo Motorsports of Carsbad, CA to overhaul the mechanicals of the car in August of 2014, including attention to brakes, steering, the addition of the roll-bar and extensive wiring harness work. However, during Mr. Mertz’ ownership, the car became a true driver’s car. Initially upgraded to a 1750cc Alfa twin cam with 5-speed gearbox, the car was rebuilt to rally. With focus on the Colorado Grand and Copperstate 1,000, the car was prepared for fast road use. However, the 1750 was deemed to be not powerful enough to take on those pesky Porsches, and a much later model 2-liter was installed. Twin 40 DCOE Webers mix air and fuel, while upgrades to all mechanical systems ensure a comfortable, reliable and fast, even by modern standards. An original yellow/black period correct license plate was restored and assigned to the car by the California DMV and finishes it off perfectly.

The result: a fantastic driving Alfa. The car starts easily and has strong power. The 5-speed ‘box shifts perfectly smoothly through an excellent clutch. The steering feels taut, and nicely weighted, and the suspension makes the car feel planted on the road with minimal body roll but retaining high comfort levels. The brakes, although still drums all round, are excellent, having been very recently overhauled.With 5 Colorado Grands (photos can be viewed here) and a Copperstate 1,000 rally under its belt, the was time for Mr. Mertz to pass the car on to our vendor in ‘19. Also, with rallying in mind for the upcoming 2020 season, the car was purchased, detailed and thoroughly checked for reliability. However, with COVID-19 hindering play and the cancelation of many events, plus major commitments for 2021 and beyond, the car is reluctantly offered for sale.

A relatively small number of examples of the Bertone-bodied Giulietta Sprint were built, and many have not survived, succumbing to rust and 60+ years, and today these rare models are highly prized by Alfa Romeo connoisseurs. And the example here has to be driven to be truly appreciated.