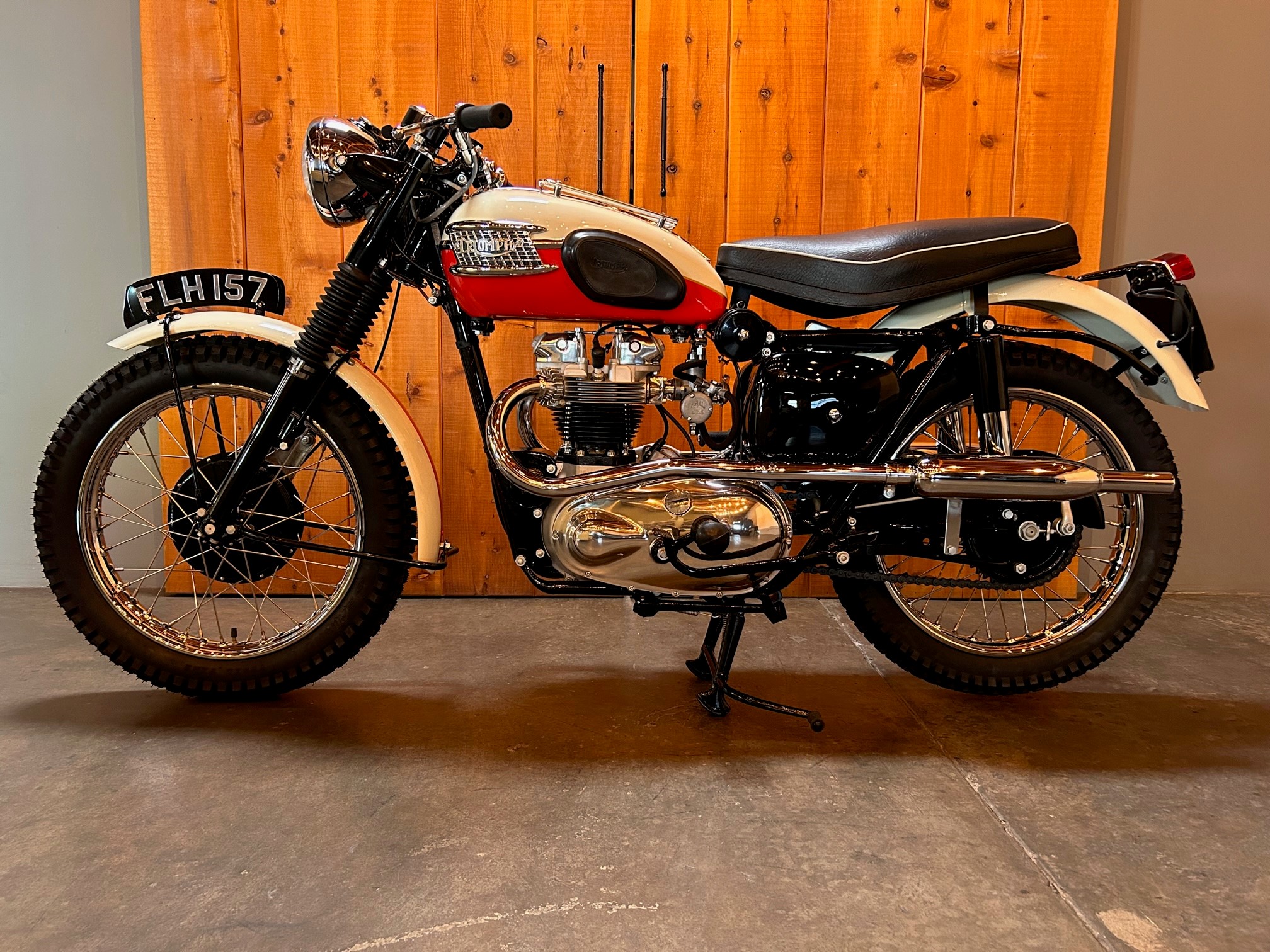 For many years Triumph was justifiably King-of-the-Desert, a hard-earned title gained from innumerable wins in countless Mojave Desert contests, and elsewhere, Success in the International Six Days Trial in the late 1940s prompted Triumph to adopt the Trophy name for its on/off-road 500cc TR5 twin, soon to be joined by a 650cc model when American riders predictably clamored for “more and bigger.” From the edict “race on Sunday, sell on Monday”, the company made off-road competition, an important selling point for the Triumph brand.

Introduced for 1956, the TR6 Trophy featured the new Delta aluminum-alloy cylinder head borrowed from the Tiger 110 roadster. With a single Amal Monobloc carburetor and running 8.5:1 compression pistons, the TR6 engine churned out a tractable 42hp.

The 650 Trophy’s introduction to America could not have gone much better when a trio of lightly modified bikes finished 1-2-3 out of 625 entrants in the famous Big Bear Run, a grueling 150-mile race from the floor of California’s Mojave Desert to Big Bear Lake at 7,000ft. No wonder, then, that the new TR6/B was enthusiastically received by American off-road racers, and with further modifications soon became the definitive “desert sled,” wielded to good effect by riders like Bud Ekins, Eddie Mulder and countless others, including an actor turned racer by the name of Steve McQueen.

Facilitating the TR6’s use as a trail bike was fitment of a small fuel tank, a siamesed 2-into-1 exhaust system with mid-rise muffler, a multi-pin quick-detach headlight and a large-section rear tire. For 1957 the Trophy got a distinctive two-tone paint scheme, adorned for the first time with the new “Harmonica” style tank badge. Up front the frame’s steering-head angle was tucked in slightly for better turning in the dirt, while an enlarged 8-inch front brake with jutting air scoop looked the business and brought things to a halt. Hoping to ward off damage from big jumps, wheel spokes were now straight and butted, the rears larger in diameter. A hot Lucas “Red Label” Competition magneto was standard equipment.

The 1957 Triumph 650cc TR6 Trophy offered here is something of a rarity these days. With so many thrashed into oblivion, a straight, matching numbers machine is quite the find; and that was the starting point of the restoration here. Liberated from an aging collector who decided he simply didn’t have the time to restore it, boxes of a complete TR6 changed hands to our meticulous and experienced vendor and the ground-up resurrection began.

The frame was checked for issues such as cracking and straightness and accordingly powder-coated. In the frame hangs an engine and gearbox fully rebuilt to original factory specifications by marque expert, Dean Collinson. All ancillary parts were fully rebuilt, including mag, dynamo, speedometer, etc. as well as all cycle parts. Forks were rebuilt and NOS shocks installed at the rear. Brakes were meticulously machined and work perfectly.

And then attention turned to cosmetics. Don Hutchinson provided paint services to the tank to exact factory specifications and a special sports seat was sourced at RK Leighton in the UK.

Exhibiting unrivalled authentically and attention to detail, the bike presents perfectly and is sure to place well at any concours event. But the bike was built to run and to run well. After “shake down” the bike returned to another marque expert shop, Glory Motorworks for re-torquing, service and a thorough go-through to ensure the next custodian’s pleasure, be it show and display, or a thrash through the Mojave, chasing the ghosts of the past.