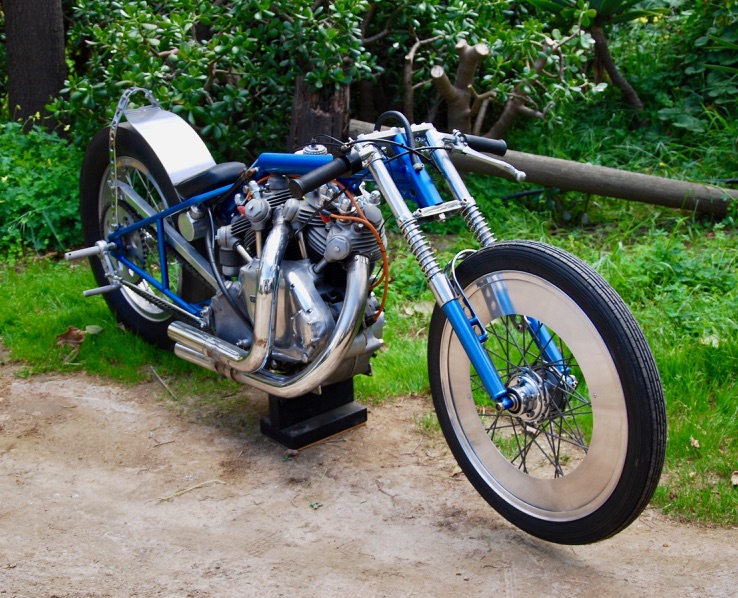 1951 Vincent 998cc Series C Rapide Dragster. Vincent was quick to regroup following the close of WWII’s hostilities, with the postwar Series B Rapide even then seen as an iconic V-twin in a class of its own for performance and handling. A significant proportion of Vincent production found its way to the export market in line with then government policy, allowing the funds to continue development. The arrival of the Series C saw improved handling with the introduction of Girdraulic front fork, a blade-type girder fitted with twin hydraulic dampers. The new model bristled with innovative features, including adjustable brake pedal, footrests, seat height and gearchange lever. The superlative factory finish was to the highest of standards, commensurate with the retail price which was almost double that of some of its contemporaries.

However, on the bike on offer here, all that was stripped away. Chuck Gruebner was stationed in El Paso, Texas and caught the dragster bug aboard a BSA Super Rocket. Once discharged, Chuck took a position as a tracking radar technician at Vandenberg Airforce Base and lived in neighboring Lompoc, California, and while he was sneaking down an alley to avoid traffic in nearby Oxnard in August 1962, he spied a Vincent in a garage covered in a considerable layer of dust. Stripped to a rolling chassis with engine still in place, but missing quite a lot of parts, the bike had been left by a neighbor as collateral on a $300 loan to initiate a divorce. Once the legal transfer of ownership was taken care of, Chuck bought the bike and took it home to Lompoc.

The bike’s first drag strip outing was pretty much as Chuck bought the bike complete with standard Vincent tall gearing. After a good clean and full service, the bike did well with a 14 second run at 95mph. Encouraging, seeing as Chuck’s tricked out BSA was only a second and 6mph faster. Through 1962 t0 ’64 the engine went through numerous performance upgrades, including larger carbs, porting & polishing, new wheels, a diet and gearing optimization, though the standard frame set up remained. Still, a 12 second quarter mile run at 110mph was a regular achievement, mostly at Santa Maria, but the bike was also campaigned at Lion’s, Irwindale, Fontana, Carlsbad, Bakersfield and Las Vegas.

Development came slowly, down to economics. We are still not sure of the reaction of Chuck’s wife when she opened her Valentine’s Day present – a new carb.

In 1964, Chuck and his family moved to Las Vegas to work on the Apollo Space Programme. Devastatingly, the move was immediately following the permanent closure of the Las Vegas Dragstrip. Chuck had to run the bike at the local tracks in Fontana (225 miles away) and St. George, UT, only 130 miles up the 15 Freeway and at 3000 feet altitude. At St. George, the Vincent achieved a track record on its very first outing, a record that stands today…. Because the track closed.

Two years later and Chuck returned to his home in Lompoc. He met a neighbor, Tom, who raced dirtbikes and was 70 pounds lighter. Testing the bike on the deserted Santa Rosa Rd. honed launch and shifting skills, while barbed wire fences encouraged keeping things straight. From 1966 – 1968, the engine’s bottom end was redone by AMA Hall of Famer, Marty Dickerson, and further development of internals, carbs, exhaust, weight reduction and a second front head installed at the rear. Now an 11-second bike, which predates wheelie bars, air-shifters, and computer intervention, it was a handful.

The bike achieved impressive results but was still limited. Friend famed Vincent drag racer, Clem Johnson, obviously inspired. Clem Johnson was a timid machinist from Buffalo, New York. Quiet and unsuspecting, he built the hugely successful Vincent-powered “Barn Job” – the subject of many a magazine article for 50+ years. Chuck designed the frame after-hours at work and then built it to the very highest standard of materials and construction, with some lovely welds. He took advantage of the base’s resources and the frame was built in the shop, relying on the talent therein, including two NASA certified welders. Two diameters of 4130 chrome moly tubing of 0.083” wall thickness were used. Up front: Yamaha 90cc bike forks. Times dropped in to the 10-second range.

Further development with BSA Gold Star forged pistons and a Harley Sportster clutch grafted into the Vincent system. Now at 1100cc with greater compression, bump starting was the subject of great adventure. But getting the bike off the line in a horizontal plane was made infinitely easier by the clutch set up, further improving times in to the mid-10s, with a best-ever 10.30 seconds at 130mph achieved a couple of times.

With life adjustments and changes abundant, the bike ran until the 1971 season, when Chuck accepted a job and moved the family to the Marshall Islands. Left in storage for 23 years, while on the assignment, the Vincent languished until moved to Chuck’s return home to Florida. Then in 2008, he decided to put the bike up for sale. It didn’t take long for word to get around and it was duly purchased by our vendor. It has been on static display in his discerning collection since.

This is an excellent opportunity to acquire some fantastic drag racing history with all of the allure of the great Vincent.

The bike is accompanied by a full write-up of the bikes history as told by Chuck Gruebner prior to his passing.

This 1951 Vincent 998cc Series C Rapide Dragster is Sold on a California title… yes you could make it street legal and ride it on the road!