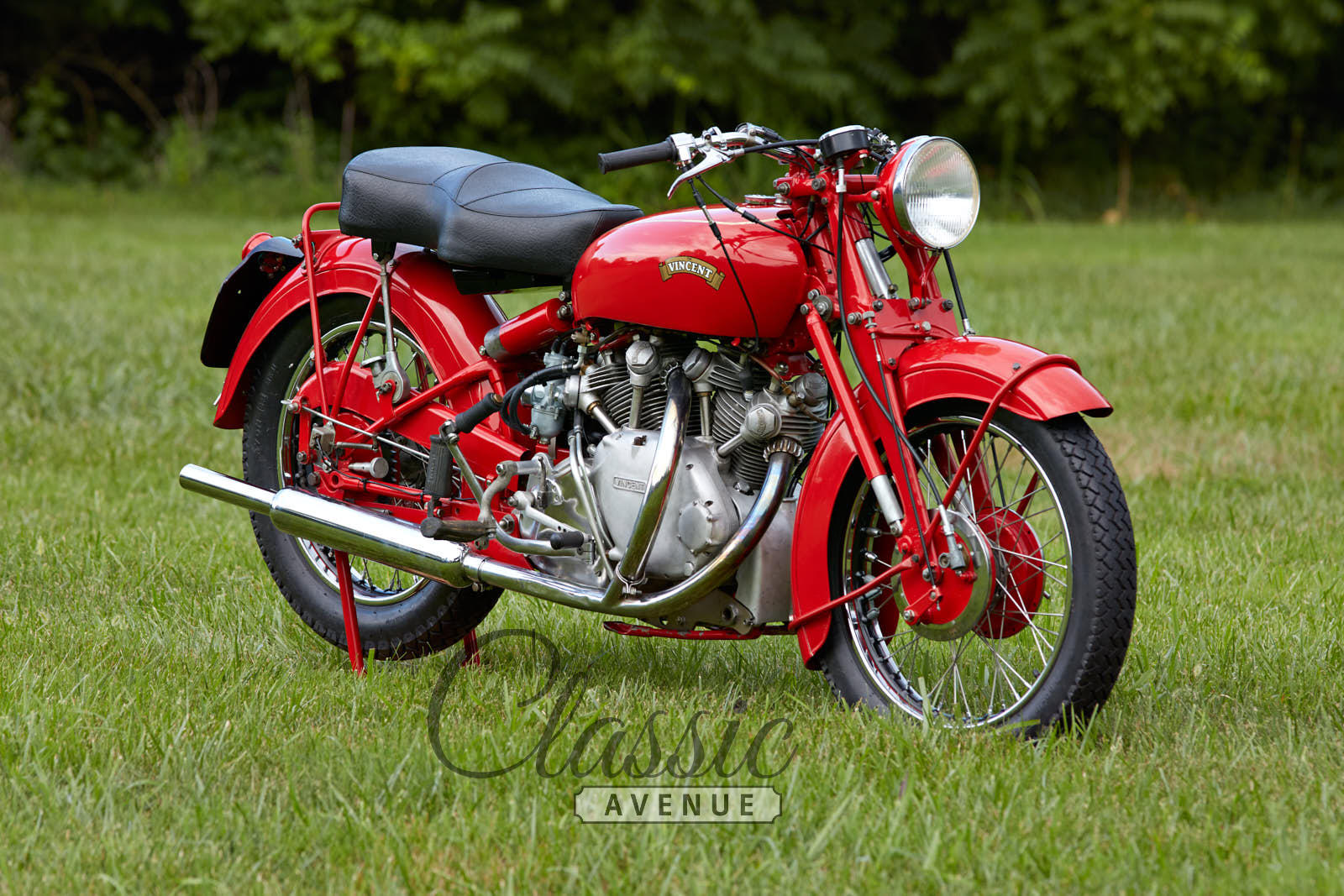 The Series C Rapide was “soft” introduced by Stevenage’s Vincent for 1948 with upgrades to rear suspension, which now incorporated curved lugs for the seat stays and a hydraulic damper between the spring boxes, while at the front the new models boasted Vincent’s own ‘Girdraulic’ fork: a blade-type girder fitted with twin hydraulic dampers. These advances began to find their way onto production models during 1948 but it would be 1950 before all Vincents left the factory in ‘Series C’ specification.

Until the Series C, all Vincents were black, but intervention from the Indian motorcycle company, who now distributed the Vincent brand, they demanded something more vibrant for the American market. And so the Chinese red Rapide was introduced. The perfect candidate for the red livery was the Touring Rapide model, with its significant fenders, and almost every surface was covered.

At 6’ 5” and 300 pounds, Sid Biberman had to make standard things go faster. As a young man, a tweaked Salisbury scooter ended in trouble with the law for Sid, but ignited a life-long passion for motorcycling. While working with the local dealer he uncrated a Vincent and that passion was instantly focused. Then a stint in the military afforded a visit to the Stevenage works and a chance meeting with company founder Phillip Vincent and the factory race bike, known as Gunga Din. Inspired, Sid bought Black Lightning parts at the factory and his red Rapide was given the Big Sid treatment.

Sid became a larger than life character in motorcycling, in name and nature, owning bike shops, tuning Vincents and Japan’s big bore machines, judging concours and as a reference for all things in motorcycle go-fast modification. After Sid’s first heart attack, he was charged with one last project by his son, Matthew: a Vincati. But once complete, Sid succumbed to another heart attack and the hobby lost another of its great characters.

One of only 2758 Series C Vincent Rapides built, #4543 was dispatched to the United States in 1949 and sold to the Indian Sales Corporation.  It is a matching numbers example (with VOC club documentation), originally finished in black and fitted with the touring valanced fenders (a relatively rare export to North and South America option). The bike was bought as an actual, honest-to-goodness barn find in 1983, stored as purchased in crates in the basement for years. In the early 2000’s, the new owner began to restore the bike on an as-he-could basis, but the processed outlived him, when he passed away in 2013. By 2013 all body work and some motor assembly was completed, but the bike was returned to storage. Then, inl 2019 Matthew Biberman was set the task of finishing the machine.

The bike is overwhelmingly original. The accompaying documentation from the Vincent Owner’s Club verifies that this is a matching numbers Rapide in touring trim.  The polaroids from 2003 were taken when the owner, John began in earnest to restore the bike.  These pictures demonstrate that the basket case barn find was comprised of all the major components: you can see the upper frame member and the complete front fork set up.  The gas tank was present as well.  The rear frame member and all the subassemblies along with the rear fender and the license plate bracket were also present and accounted for.  The engine was complete, though the gear change cover was broken out and necessitated the fitment of a reproduction cover.  With the exception of the magneto, all other engine components were present.

John was a long time friend of Big Sid Biberman.  It was with Sid’s encouragement that John bought the bike.  The fact that the bike as purchased was no longer factory black was of interest to Sid.  Back in the 1950s there was an Indian dealership in Fayetteville NC that was well known for customizing their bikes in order to drive sales.  Sid believes this Rapide was painted red and black with the Indian decal on the tank in that effort.  Given that the bike had already been repainted, John decided to honor his buddy Big Sid and paint the bike Chinese Red, using for a paint match some of the cast off pieces then still in Sid’s possession.  When Matthew undertook the restoration, he took inspiration from the early pictures he had of his father’s red Rapide.  He also finished it off as Sid would have wanted, that is as a fully running, ready for road use Vincent.  Given the absence of a magneto, he fitted a modern BTH magneto and though we have the original generator (see picture), he fitted a modern Alton generator and regulator as well as 12volt battery and halogen 12 volt lights in order to provide the new owner the most practical set up to ride and enjoy the bike.  (Original 6 volt regulator is also pictured and included in the sale.). For the same reason, Matthew fitted Amal Mark 1 concentric carburetors and manifolds to provide the trilling ride Vincents are famous for.  Again, the original Amal 276 touring carburetors and manifolds are pictured and will go with the sale.  Matthew advises that they need reconditioning if you wish to put them into service, though they can be mounted as-is, for show purposes.

The only other missing pieces of significance are the original seat and original handlebars (neither of which are pictured).  John bought a standard Vincent flat bar but Matthew mounted a touring bar to make the bike correct as it left the factory.  The handlebar controls are a mixture of original and reproduction pieces, but the dual chokes are original and extremely rare.  The Bowden compression release lever is a nice reproduction sourced from Mike’s Indian parts who also replined the kickstart lever and supplied the bikes two brake wingnuts. The bike is a remarkable example of a survivor’s bike and Matthew offers to help the new owner should he or she wish to locate originals of the few items discussed above.