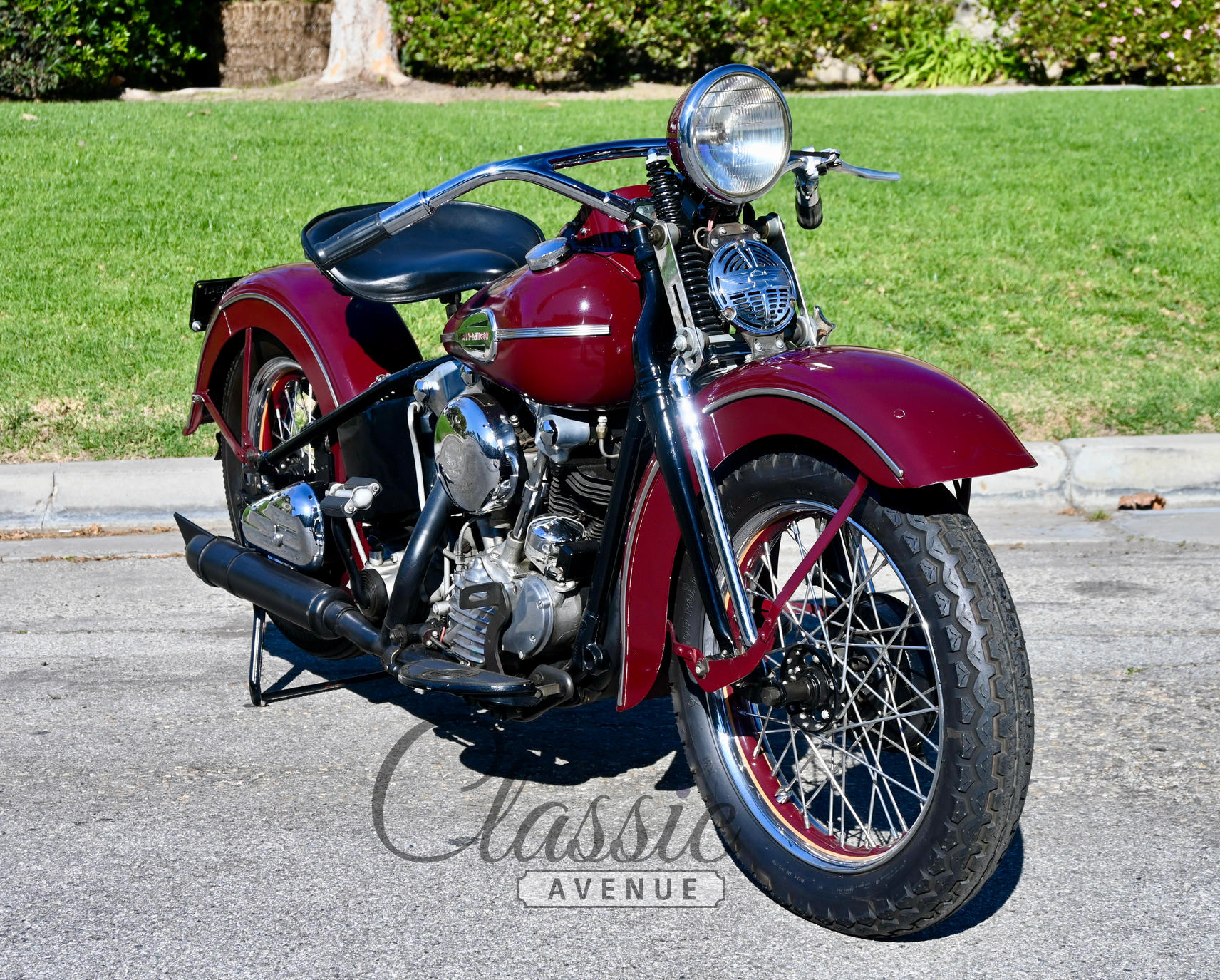 Arguably, the most handsome and recognizable motorcycles from the Harley-Davidson factory is the 61ci ‘Knucklehead’. The overhead-valve v-twin power unit, named for the distinctive rocker boxes, was first utilized in the 1936 model and ran until 1947, with improvements along the way.  It was housed in a twin-loop frame, deemed necessary to handle the 61’s increased power of 37bhp in ‘E’ and 40bhp in high-compression ‘EL’ forms, while the front suspension was beefed up too, the forks switching to oval tubing in place of the previous forged I-beams. Once the teething problems associated with the earliest examples had been sorted out, the Milwaukee factory quickly set about establishing the EL’s performance credentials. Joe Petrali set a new speed record of 136mph at Daytona Beach on March of 1937, while Fred Ham later averaged 76mph for 24 hours at Murco Dry Lake in California to set a new high mark.

The 1941 Harley-Davidson 61ci EL Knucklehead offered here, has been owned by our vendor since 1989, when purchased as a basket case. After some research for someone “in the know”, a ground-up restoration at the hand of Bob Ross of Motorcycles Only of Gardena, California was undertaken. Ross was a stalwart of the antique American motorcycle and desert racing scenes before his passing in 2008, and was an accomplished restorer of all things Harley and an expert in the heady world of Crocker motorcycles. Our vendor was very hands-on through the restoration, sourcing parts like the OEM Linkert carb with brass tag air cleaner, and even sanding the Hollywood ‘bars, no mean feat!

During restoration, it was decided to add a couple of modifications for better performance. 80ci Flathead flywheels boost capacity by a couple of cubic inches for additional power from the longer stroke, a modification known to very few. That, and an 18″ front wheel to aid handling supposedly transformed the bike, but can be easily returned to stock specification.

Upon completion, the bike was transported to Davenport, Iowa for the AMCA meet. It was judged 92 points from memory, but alas, the judging sheet has been lost. The deductions centered around the 18″ front rim, painted and striped with the rear and the chromed fork legs. A point was also deducted for incorrect fasteners, which our vendor somewhat disagreed with. Bob certainly didn’t! Regardless, the bike scored a Junior First, the trophy accompanies the bike. Additionally, the bike was featured in Tod Raferty’s “Harley-Davidson, The Ultimate Machine“, page 190, published 1994.

Since then, the bike has spent that 30 years as part of a very discerning collection motorcycles amongst Shelby Mustangs and Cobras in a private museum setting  in California. The restoration, now 30 years old, has held up exceptionally well. The overall feel of the bike is a consistently settled patina, the mark of a consistent and very high-quality refurbishment. Under our vendors stewardship the bike has been ridden minimally, possibly as few as 500 miles.