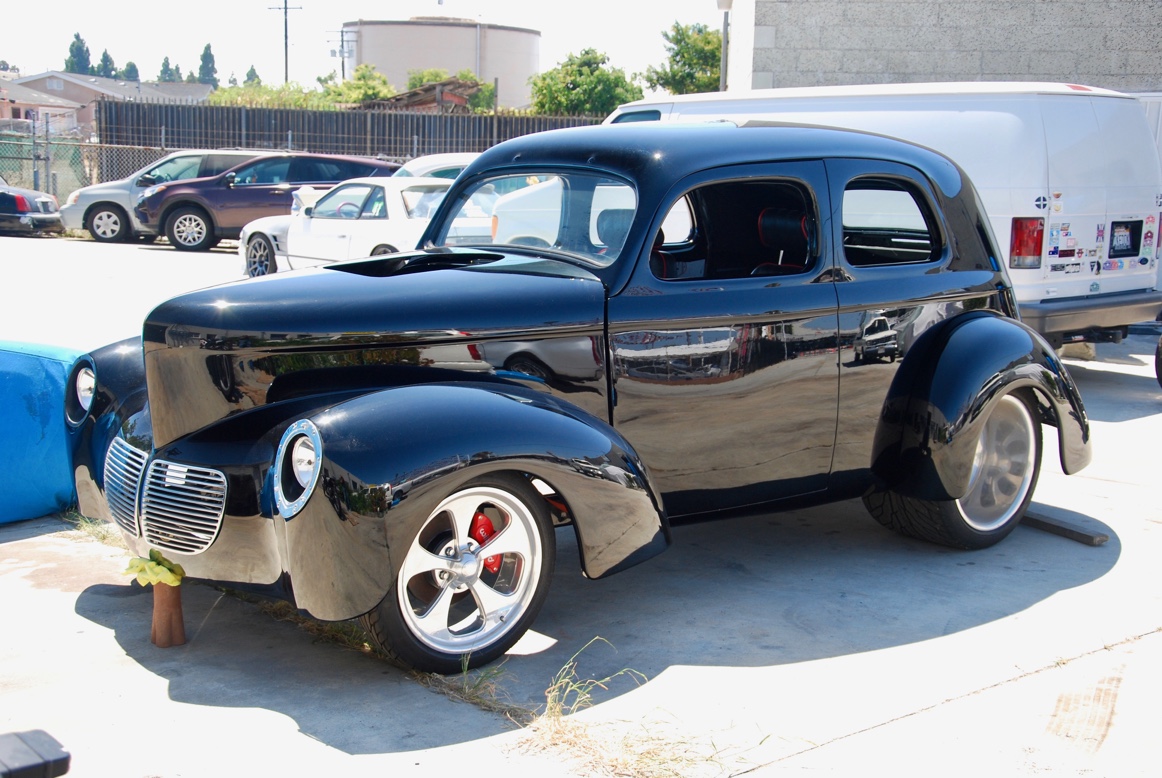 Willys Overland Motors, the reorganized Willys-Overland company, began producing cars in 1937, in sedan, truck, station wagon and coupé form. Their 4-cylinder engines were prone to catastrophic failure and combined with a lack of replacements, parts supply and insufficient support from the Willys company, the car became a perfect target for the nascent hot rod community.

The car on offer here, hails from a Southern California enthusiast with a small car collection. An avid hotrodder and tinkerer, professional engineer, Larry Lary, ran numerous machine and engineering shops in the Los Angeles area, specializing in precision engineering for the aeronautical and aerospace industry. Parts he made still orbit the planet. The project began about 20 years ago, when the original Willys steel sedan body was delivered to A-Universal Autobody in June of 2001. A-U embarked on a multi-year restoration and modification of the body, welding panels in place of the rear doors and flipping hinge location on the front doors making them open electronically, “suicide” fashion. The rear of the car was modified to take the enormous rear wheel/tire package and the rear seat pan removed and replaced with a beautifully manufactured battery box. The chassis was reworked, reinforced and restored and a fiberglass hood/fender nose was built. The whole package was then exquisitely painted in black by Paco, a very well-known painter, who used to work for Chip Foos.

The interior has seats were sourced and refinished in black leather with red piping, with a center console, a fuel cell is mounted in the trunk, complete with Willys logo, an electronic mechanism hides the rear license plate, taillights are frenched in and braking is courtesy of Wilwood. All custom parts were designed and built by Larry on his CNC machine, to very exacting spec.

The engine that accompanies the car, a big block Chevy of 560ci capacity, was built by Larry and old friend, Tom Roberts, an equally enthusiastic hotrodder and engineer. The final engine went to Jack Peloquin, who dyno’d the car and returned it ready to be installed with approximately 1100 bhp on tap on race fuel (See print our below). The trunk-mounted fuel cell is split in to two, half for regular 91 octane pump gas, the other for race fuel, switched from the driver’s seat. This is mated to a GM400 transmission. There are no blower manifolds available for the dart heads, so Larry made a full custom item.

Mostly complete, here is a marvelous opportunity to acquire a desirable spec hotrod with all the heavy lifting complete, waiting for all the personal finishing touches to the design of the new owner.