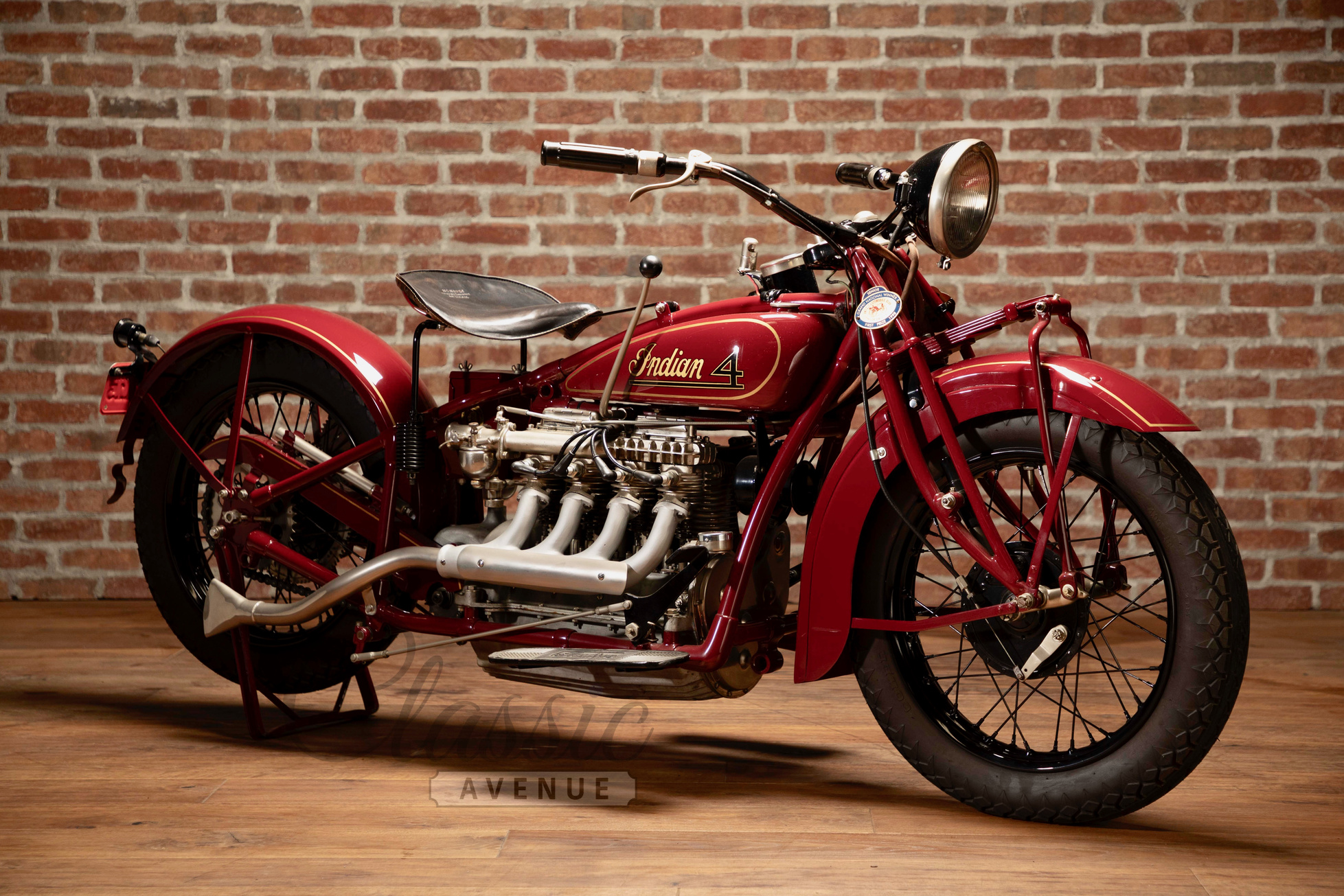 Early four cylinder motorcycles have always captured the heart of the collector, originally with Belgium’s Fabrique Nationale D’Arms DeGuerre, or FN, followed by American-made Pierce, with a lengthy, rapid-cruising, shaft-drive model, aptly named “Four”, made between 1909 and 1912. Following came Henderson, Cleveland, and Ace and Indian until the configuration was deemed too complicated and expensive through the war years. Ariel tried it in a square layout, and then the Japanese perfected it in 1969 turning the whole thing 90 degrees.

Indian’s first Fours were little more than Aces, but immediately were made a finer machine for riding conditions. In July of 1928, Indian announced its first ground-up designed Four, the Series 401. With the appearance of the popular Series 101 Scout, the new Four received a 101 fork with an additional leaf spring to handle the extra weight and the streamlined gas tank and fenders of the Scout, though the frame was still Ace. A year later, the Series 402 was announced. The frame was now a double front down tube giving the appearance similar to other Indians and added rigidity. The engine gained a five main bearing crank.

For 1930, the crankcases were revised with a central drain plug and additional ribbing on the bottom case, while alloy pistons reduced clearances, producing less noise. The frame gained the more notable improvements. DuCo lacquer replaced enamel, and heavier cadmium plated spokes were used in the wheels. Finally, an effective brake was used in rear wheel. An Autolite generator replaced the smaller Splitdorf unit. The ineffective bullet headlight was replaced by a John Brown Motolamp and centrally mounted on new handlebars with a revised shape and a crossbar. Chrome made its first appearance on Indians this year providing an enhanced level of brightness and corrosion protection.

The ’31 Four on offer here was subject to a ground-up restoration in the hands of John Eagles. On static display for the last decade in a substantial private California collection, the bike remains in excellent condition throughout with the gentle settling of surface finishes.