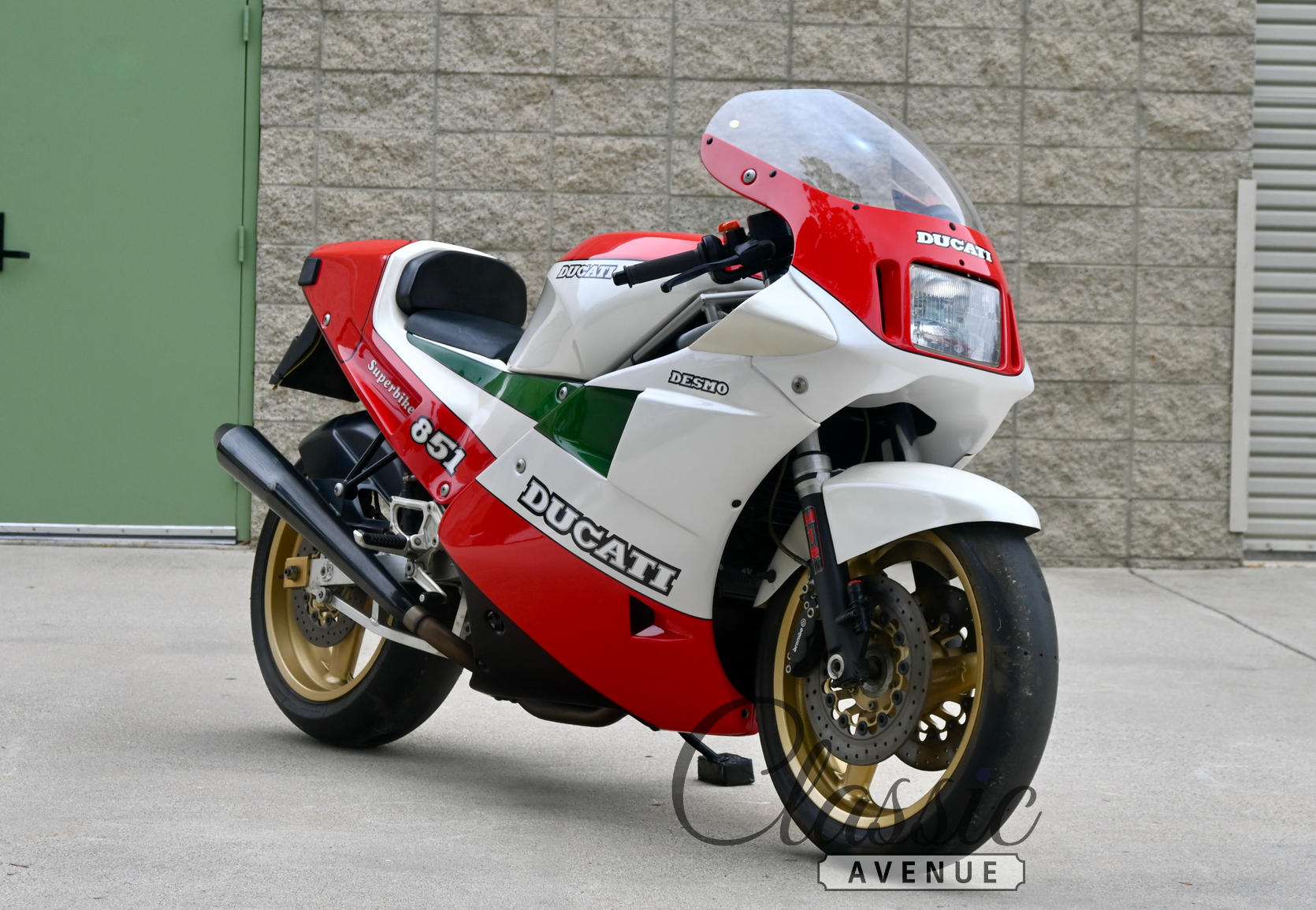 World Superbike Championship, a silhouette-class road racing series based on heavily modified production motorcycles, was founded in 1988. From that first year of racing, Ducati has won more titles than all other manufacturers combined – the impressive tally is 313 individual race wins and 17 championships to date. The bike that started that string was the 851, powered by Ducati’s new “Desmoquattro” V-twin, so called for its desmodromic valvetrain and four valves per cylinder. The 851 served notice that high-performance sportbikes and the new World Superbike racing would not be Japanese-only affairs.

Designed by engineer Massimo Bordi, who was influenced by both Cosworth and Ferrari in designing the engine, designing a powerplant with liquid-cooling and fuel-injection, a couple of firsts for Ducati. The 851 restored the fortunes of the Italian company and paved the way for a highly successful family of superbikes. It was installed into an intricate trellis of straight tubes, whose design would become a Ducati trademark.

WSB racers were required to be based on production, over the counter streetbikes. One way to get the highest-specification base model possible was to build homologation specials – expensive, limited-edition versions that needed relatively minor modification to be track-ready. Ducati took this so-called “kit bike” approach with the 851 Superbike, producing just 207 of these nominally street-legal hand-built machines, enough to satisfy World Superbike rules, with an estimated 20 examples coming to the U.S.

Differences from showroom stock include a braced swingarm, close-ratio gearbox, ventilated dry clutch and lightweight magnesium 17” Marvic wheels. No speedometer, just a tachometer and temperature gauge. The motor was upgraded with race-grind camshafts, a hot-rodded electronic control unit, ram-air duct and free-breathing reverse-cone mufflers. It was good for about 120 horsepower. Only 500-odd 851s were produced in total.

This 1988 Ducati 851 Tri-Colore kit bike was purchased by a Southern Californian collector about ten years ago from the Dana Berman collection. As one of the 207 “Kit bikes” the bike features the following differences from the Strada (Street) version:

The bike is accompanied by a pair of barrels, bellmouths, mechanic’s manual, gaskets and exhaust headers, as well as an unused racing nose fairing (all pictured) and fairing side panels (to be photographed).

The motorcycle has obviously been enjoyed in previous ownership. In generally good condition, it is not a freshly restored machine, but shows some signs of wear and a lovely settled and consistent patina. On static display for the last decade, it would need the usual re-commissioning before return it to road or track.

As Ducati was a manufacturer producing less than 50,000 motorcycles a year the homologation requirements for World Superbike required 200 units of the 851 to be built for 1988. This homologation machine was known as the 851 Superbike Kit and was a confused mixture of racer and street bike. Here was a machine designed for racing that came with Michelin racing slick tires, but also featured an electric start, headlight and taillight. Fortunately there were no turn signal indicators or rearview mirrors. Known as the “Tricolore” because of the distinctive red, white, and green color scheme, 207 Superbike Kits were produced, 54 going to the United States so that the 851 could be homologated for AMA Superbike racing.

The heart of the Superbike Kit was a race-kitted 851-cc engine that produced an impressive 120 horsepower at 10,000 rpm at the crankshaft. The nimonic valves were 32 and 28 mm in diameter, controlled by desmodromic “kit” camshafts. The flat-topped 92 mm piston had a 0.3 mm rise over that of the Strada, giving a compression ratio of 10.7:1. From the 1987 Superbike came Pankl con-rods, and the Superbike Kit featured a closer ratio six-speed “kit” gearbox than the Strada. Shared with the 750 and 906 Paso was the 14-plate dry clutch. The Weber Marelli electronic ignition and fuel injection system was also the same P7 system of the racer, with twin injectors per cylinder. This used two pick-ups. An rpm sensor was mounted opposite the flywheel so as to detect the four tabs on the flywheel rim, while the injection timing sensor was placed opposite the timing gear, detecting a tab on that gear. It was an extremely effective set-up and would last through until the final 996 SPS of 2000. The exhaust system was a racing style, similar to that on Lucchinelli’s Donington-winning 851.

Generally the chassis of the 851 Superbike Kit reflected developments from the official 1987 racing program. Still with a lazy 27 ½ degree steering head angle, and 104 mm of trail, the chrome-molybdenum tubular steel frame was similar, and incorporated a braced aluminum swingarm with a rising rate linkage. The suspension was by Marzocchi, with 41.7 mm M1R forks and a Supermono rear shock absorber. While the wheels were racing Marvic 17-inch magnesium, with state-of-the-art rim widths (3.50 and 5.50 inches), for some reason small (280 mm) cast-iron front discs were fitted. The brake calipers though were racing Brembo P4.32B with four 32 mm pistons. At the rear was a surprisingly large 260 mm disc, with a Brembo P2.08N caliper. Completing the racing specification were Michelin slick tires, a 12/60 on the front and 18/67 on the rear.

Engine no. tbd
Frame no. tbd