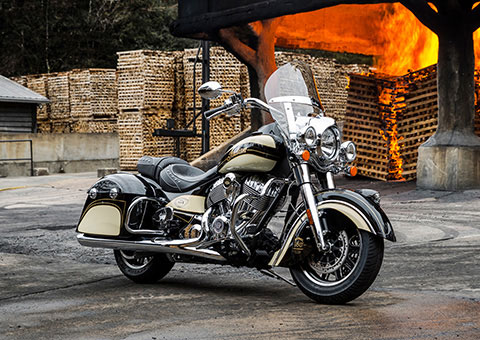 Taking you back to the halcyon days of Indian, the 2016 Springfield is a naked cruiser with the styling cues you expect from the marque—fully finned top end, laced wheels, valanced fenders, leather seats, a front-fender mounted War Bonnet that lights up, and abundant chrome.

Nods to modern technology include ride-by-wire throttle (all wiring is inside the bars), ABS (with calipers hidden by the fenders), keyless ignition, digital (and analog) instrumentation, a cast aluminum frame, and cruise control. A 29-degree rake gives the Springfield a relaxed ride.

Powered by the Thunder Stroke 111ci V-Twin, the bike has building-pulling torque at 119.2 ft/lbs to propel the 785lb machine. To stop the forward momentum are dual 300mm floating rotors w/ 4-piston calipers tucked under the front valanced fender, with a similar single out back.

As Rider Magazine reported on March 7, 2016, the entire run of 150 limited-edition Chief and Springfield models built to celebrate Jack Daniel’s 150th anniversary sold out in a matter of hours. Literally in the first day. The individually numbered motorcycles – the first-ever production vehicles to feature Jack Daniel’s livery – became available for purchase on March 4. Designed in conjunction with Brian Klock and his team at Klock Werks in Mitchell, South Dakota, the Limited-Edition Jack Daniel’s Indians were hand-painted and feature an array of genuine Indian Motorcycle accessories and custom accessories, as well as Jack Daniel’s-inspired custom paint and logos, badging, leather saddle and saddlebags. Each fender is inscribed with the names of the seven Master Distillers who have overseen the Jack Daniel’s distilling process over its 150-year history. They also came with a custom-printed Jack Daniel’s whiskey barrel top to commemorate each bike.

“We knew that the pairing of Jack Daniel’s and Indian Motorcycles would be popular, but we never expected to get such a tremendous response in such a short time frame,” said Dave Stang, Director of Events & Sponsorships for Jack Daniel’s.

Number 001 Chief was auctioned for charity at the Barrett-Jackson Auction in Las Vegas in 2016 and attained a staggering $150,000 winning bid!

The 2016 Indian Springfield Jack Daniels 150th Anniversary Edition offered here, no 102 of the 150 built, comes to us from one of those lucky first-day order recipients. On static display for the last six years, the odometer reads 1mile, yes, 1 mile. Completely unused, unmolested, the bike is exactly as it came from the showroom.

This time capsule machine has to be a fantastic addition to any collection of Americana, combining two of the most quintessential American brands.